Sunderland RCA have organised a music event at Sunderland’s Independent nightclub on Friday 6th August 2010. The aim of the event is to promote the football club throughout the city to an audience who previously may have been unaware of the club's existence.

The result, a win for Sunderland RCA over Silksworth FC by 4-0, was secondary to the money raised on the day.

The committees of both teams would like to thank all of those Supporters, Players and Officials who contributed to a very worthy cause. 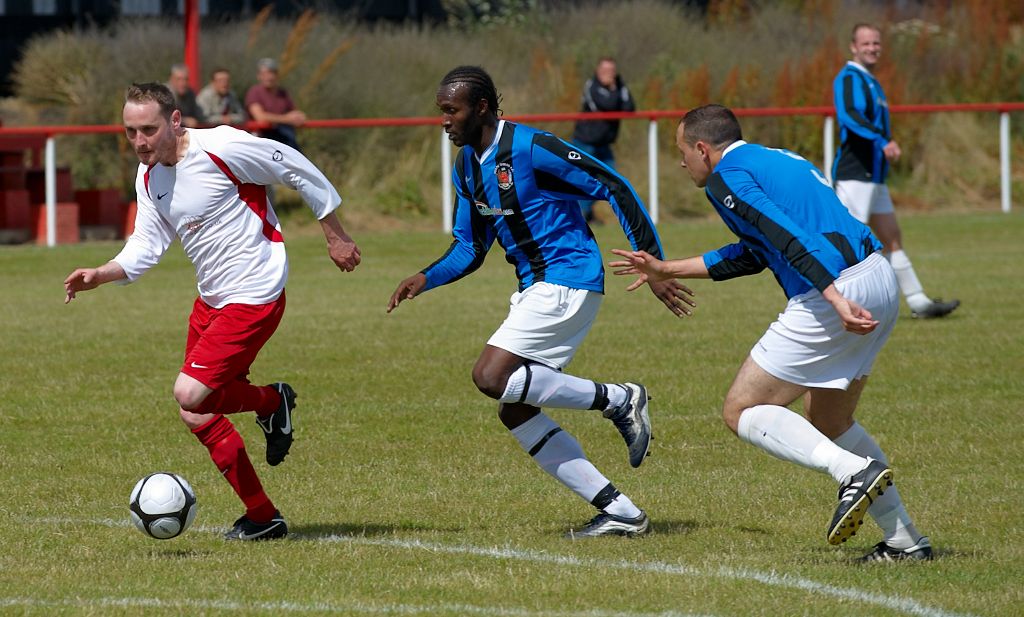 RCA kicked off their run of friendly matches with a workout at North Shields, coming away with a 2 - 1 win, with goals from new boys Gav Parkin and Michael Hepplewhite. Please click here for photos from the match.

We were on the losing side against a lively Team Northumbria, who won 2 - 0 with a goal in each half. The match photos are here.

There was a further defeat away to Crook Town. RCA played plenty of football and created chances, but were two down to a well-organised and strong home side before an Australian trialist pulled a goal back for RCA with a quality strike from outside the area that sailed into the top left of the Crook net.

RCA rounded off their pre-season with a home match against Silksworth in the Bob Gurney Trophy, winning 4 - 0. The goals were scored by Jimmy Farrell, Tony Coe, with a brace, and Gav Parkin. RCA had lots of chances and all credit to the Silksworth keeper.

"The pre-season has been a good work out, but we still need to gel as a team. Within a month we will have a settled side.

"I'm looking forward to Saturday, when we are away to Newcastle Benfield in the first league match of the season. We'll be missing David Duke, but I hope to have John Butler available for selection after his hamstring injury.

"There's good news on David Anderson, who has been given the go ahead to resume full training."

There have been more than a few changes in the squad over the summer. Check out the new pen pictures here.

In an effort to reach a wider audience and keep better up to date with our existing fans Sunderland RCA are updating their match reports via twitter. We can be found at http://twitter.com/SunderlandRCA where we will be updating club news throughout the week ahead of kick off and goals, incidents and substitutions among other things during Northern League games.

RCA came away frustrated from their 1 - 1 draw with Consett on Saturday. The view of spectators was that they had witnessed a terrific match with exciting and attacking football on offer and a great effort from Joe Fairish giving RCA the lead.

Entertainment, excitement and value for money can all be found in the Northern League Division 1 with Sunderland RCA at Meadow Park with three more home matches on the trot:

Our home league fixture against South Shields, due to be played on Monday, 30 August, has been postponed because of South Shields' FA Cup replay.

There have been more than a few changes in the first team squad recently, with comings and goings.

We welcome Phil Naisbett, Craig Tate, Joe Walton and Craig Wilkinson, welcome back Micky Coghlan from his spell down under and say goodbye, thanks and best wishes to Stuart Brightwell, Michael Hepplewhite, Richard Hodgson, Matty Hyson and Craig Shields.

The updated pen pictures are here - the photographer has not caught up yet.

Management changes at RCA The Barnes

Following last season's success under the stewardship of joint managers Ray Hartley and Glenn Moan, RCA The Barnes would like to announce the unfortunate resignation of both Ray and Glenn. Ray has decided that after a number of years at the helm that he needs a long overdue, and deserved rest, while Glenn, who took up the reins at the start of the season, now has his youngest son, Dom, playing on Sunday mornings and feels it only right that he goes along to support him in The Rusell Foster League.

Peter Morris, Thornaby FC's secretary for many years, died on October 20 four days after suffering a massive heart attack. Peter, a senior Revenue official, was refereeing a Civil Service game on Tyneside when he became unwell. Usually in the company of his dog, Peter was a faithful and a familiar figure around the Northern League. When Thornaby were short-handed, which frequently was the case, Peter seemed to do everything.

Sunderland RCA FC are looking for a Youth Development Officer to coordinate their work within youth football, and to organise a new youth development team for the club from next year.