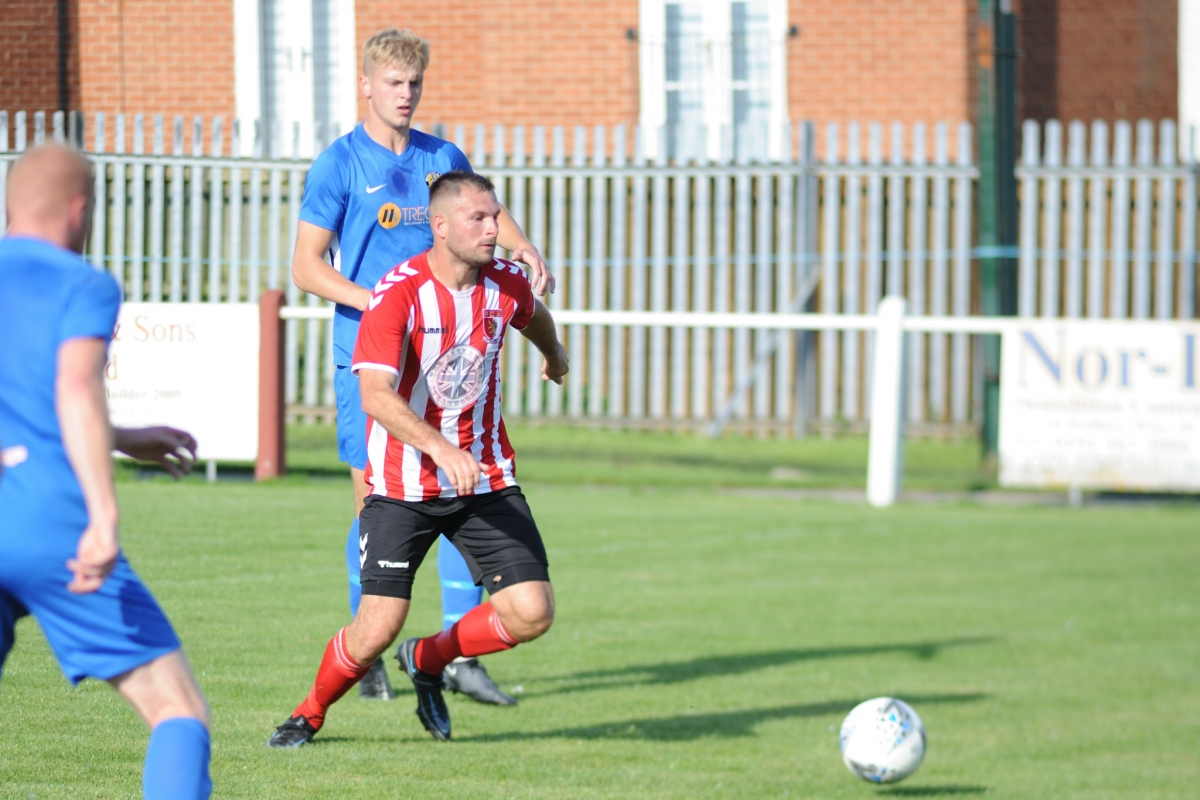 Mark Davison in action during the second half of the match.

Sunderland RCA welcomed Whickham to LGV Park for this Northern League Division One match. RCA had been given a week off - due to Redcar Athletic’s midweek FA Cup replay - to recover following the superb 3-0 victory at Frickley Athletic in the FA Cup. Whickham, meanwhile, came into the match having recorded back-to-back away wins at both Bishop and West Auckland.

RCA made two changes to the side that won so impressively in the FA Cup last Saturday. Into the starting line-up came Nathan Lawrence and George Pinder, replacing Max Allen and Michael Annang-Colquhoun.

Whickham began the match kicking down the slope, and took the game to RCA right from the start. As early as the third minute the visitors had a great chance to open the scoring as Atkinson held off a challenge from Errington before lifting the ball over the head of Ball, but the ball struck the far post and was collected, on the rebound, by the RCA goalkeeper.

RCA's first effort on goal came in the 10th minute when a ball across the Whickham penalty area was struck by Taylor Richardson but his effort was narrowly wide.

This was an isolated attack from RCA, as Whickham continued to dominate the match, forcing a number of corner kicks from their attacking play.

In the 20th minute, one such corner forced a terrific save from Ball as he blocked a close range shot from Galbraith.

The visitors' pressure continued and on the half-hour mark Scott Robson had two attempts on goal, one which was saved comfortably by Ball and the other wide of the post.

With half-time approaching, Whickham were awarded a free-kick some 30 yards central from the RCA goal - Doyle delivered a terrific free-kick which curled up and over the RCA wall but it was superbly palmed away by Ball, diving to his right.

Whatever was said in the dressing room at half-time certainly did the trick as RCA began the second half on the front foot.

In the 54th minute, Best made a driving run through central midfield before playing the ball upto Davison on the edge of the Whickham penalty area. The RCA striker then turned sharply, before firing in a fierce shot which was straight at Norton.

RCA were in the ascendancy now and took the lead in the 68th minute - a free-kick was awarded on the halfway line in front of the main stand. Lawrence delivered a perfect ball onto the head of Davison, whose onward flick was picked up by Hennis, and the RCA midfielder lifted the ball over Norton from a fairly tight angle for a super finish.

In the final ten minutes of the match Whickham stepped up their attempts for an equaliser and Ball was called upon once more to make two excellent saves - one from substitute Bisset in the 86th minute and another close range block in a crowded penalty area in the final minute.

A hard-fought win for RCA this afternoon and one in which Whickham will rue their superiority and missed chances in the first half. But clean sheets help enormously when winning matches and a single, well-taken goal was enough to take the three points.

Aside from the first half performance, the biggest disappointment of the day was the sparse attendance of 72. But - with the rare occurrence of Sunderland, Newcastle and Middlesbrough all at home at the same time - RCA weren't the only club to feel the pinch, with many other Northern League clubs restricted to double-figure crowds. Let's hope for better on Monday!

Next up is that quick return to Sunderland LGV Park when Seaham Red Star are visitors on Bank Holiday Monday. Please note the 11am kick-off time.

Did anyone else spot that at least two of the Whickham players wore incorrect shirts? Conor Newton, named as 10 on the team sheet, was wearing the 8 and Dale Burrell was wearing the 10. Newton's short, bright ginger, hair was the dead giveaway. Is there a penalty for wearing a wrongly-numbered shirt?