Ray Baines - one of our life presidents 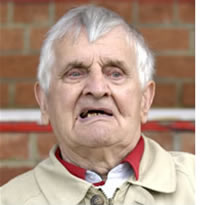 Ray will always be remembered for his dedication to the cause with unbelievable effort and commitment.

Ray won the Barclays Spaces award for SRCA and had to make a decision on how to spend the £1,000 prize. "Well the club gets the £1,000 and the wife can have the extra bottle of champagne" - sums things up really - his wife sent the bottle straight to the club as well.

Ray was with the club since the 1970s and had done all the roles other than first team Manager. He helped lay the bricks for the main stand when it was built in the early eighties and he remained loyal to one football club only, when many disappeared. The Committee agreed that the stand should be named in his honour. Although it didn't help his health when the stand was unveiled - he certainly got a shock!

Having never missed more than a handful of Northern League games since 1982, Ray was a true SRCA supporter. Once, he was travelling as a co-pilot to Billy Todd, our Physio at the time, to an away match. Billy who was driving the car was unfortunate to have a serious collision and whilst in his own words, "trying to free himself from the steering wheel", looks across to check on old Ray who smiles and says "How we gonna get to the match now?" - sums up his passion to see the CA in action.