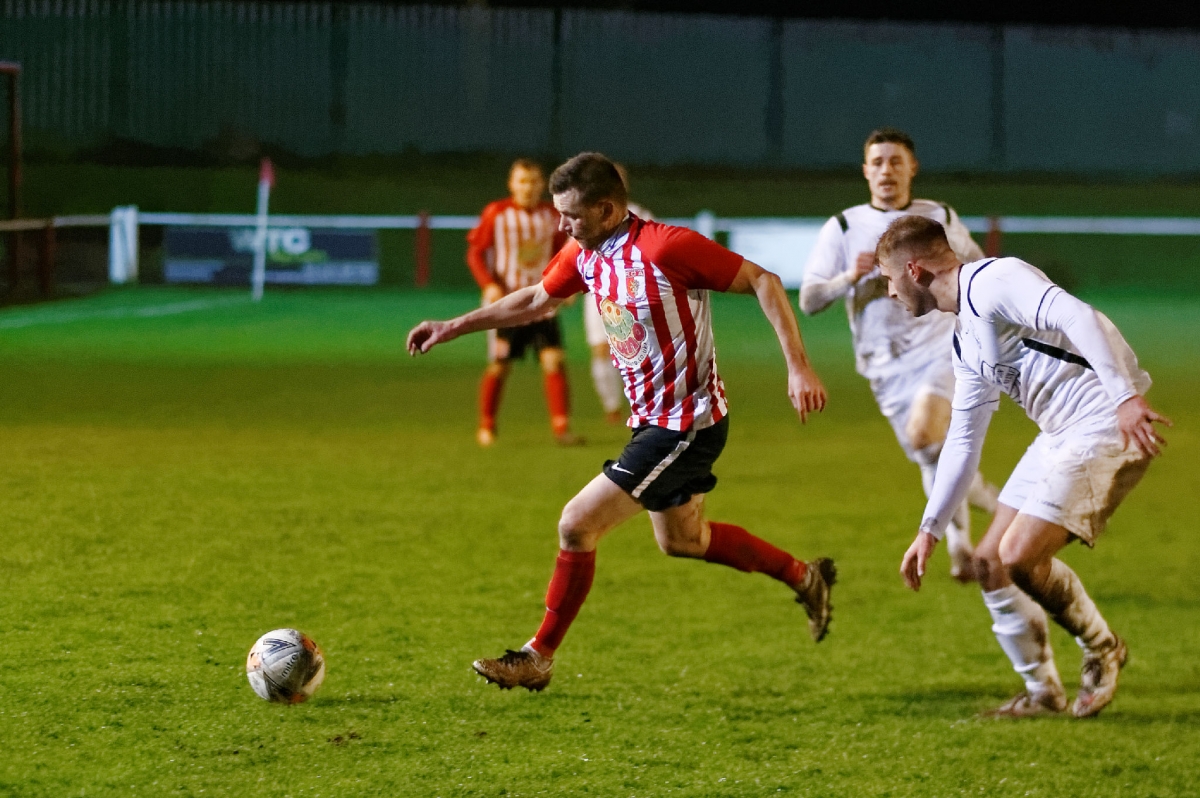 Double scorer Colin Larkin in action during the second half of the match.

Sunderland RCA entertained West Auckland Town in the Durham Challenge Cup second round. Given the weather conditions and the fact that this was the third home game in 6 days, it was a testament to the dedication of a few ground staff that this match was able to go ahead.

By a strange quirk of fate the next three home matches are against the same opponents, West Auckland Town, so this was being billed as a dress rehearsal for the FA Vase due to be played on 5 January 2019.

RCA made two changes in the line up from Saturday’s win against RCW in came Pocklington and Jury replacing Tsapalos and Elliott. C Davis who was due to play was injured in the warm up and replaced by Jury.

The game kicked off in dank drizzly conditions and it was West Auckland who took the early initiative as they drove forward down the slope.

In the second minute a through ball from Price found Xydias on the edge of the box but his speculative shot was easily saved by Pocklington. A minute later and Purewal picked up the ball from a freekick on the left, beat his marker before cutting the ball back to Wearmouth who fired in a low shot which was well saved by Pocklington.

West deservedly took the lead in the 15th minute when Xydias picked out the overlap of Hegarty on the right and his cross found Mitchell 10 yards out, he controlled the ball before curling a shot into the net. RCA were forced to make their first substitution with Lilley coming on to replace the injured Hodgson.

West almost doubled their lead in the 20th minute when Hunter sent a high freekick into the penalty area but Wearmouth’s header flew narrowly over the bar.

The first attempt on gaol from RCA came in the 22nd minute when McNab played a ball forward to Larkin, his shot was blocked by Colquhoun and the ball ricocheted of the knee of Charlton and flew inches wide of the post. West picked up again and where unlucky when Mitchell cut inside and unleashed a low drive which was blocked by Lilley with the ball looping over the bar for a corner.

On the half hour mark Mitchell was again involved in the next opening for West when he broke down the left before squaring the ball to Portas who, from 35 yards out sent in a shot which flew over the bar. West were restricting RCA’s forward play to a minimum, a rare counter attack saw a long ball forward from Swansbury fall for Charlton, he pulled the ball back to Jury who sent in a deep cross to Page but his weak header was easily collected by Bland.

Charlton was unlucky not to equalise minutes later when he ran onto an inch perfect pass from McNab but Bland stayed on his feet and was able to deflect the ball away for a corner which was eventually cleared after a goalmouth scramble.

In the final minute of the half Lilley made another great challenge to deny Purewal any chance of increasing West’s lead. Within a minute of the restart RCA showed their intension with a shot from Charlton being well saved by Bland.

Minutes later and McAloon was played into the box by McNab but his shot was blocked by Hunter. RCA wrer not letting the visitors settle and the pace of Larkin was causing problems, in the 48th minute he outpaced the West defence with a great run down the right before crossing to K Davis in the penalty area but Colquhoun managed to block the shot and clear.

The pressure was mounting on the visitors defence and in the 50th minute RCA equalized when Page swung a ball out wide to K Davis who sent in a low cross, Hunter under pressure from Larkin slipped in his attempt to clear the ball and left Larkin one on one with Bland and the RCA striker made no mistake from 10 yards out.

On the hour mark, a through ball from Jury released Charlton who cleverly cut the ball back into the path of O’Neill but his shot was deflected wide, from the corner O’Neill found Larkin at the back post and his volley looked destined to find the net until Bland got a strong hand to the ball and it was cleared.

The transformation in RCA for the second half was unbelievable and it was no surprise when they took the lead in the 65th minute, a lovely diagonal ball from Page was chested down by O’Neill and he slotted the ball past the advancing Bland.

It was one way traffic now, in a complete reversal of the first half, it was now West who where finding it hard to get any forward momentum going.

As the game entered the final five minutes Larkin popped up to make the game safe, some terrific play between Charlton and K Davis saw the ball played into space on the right where K Davis shot across the face of the West goal and Larkin was on hand to stab home from close range.

RCA played out the remainder of the game safe in the knowledge that they were in the hat for the quarter-finals of the Durham Challenge Cup.