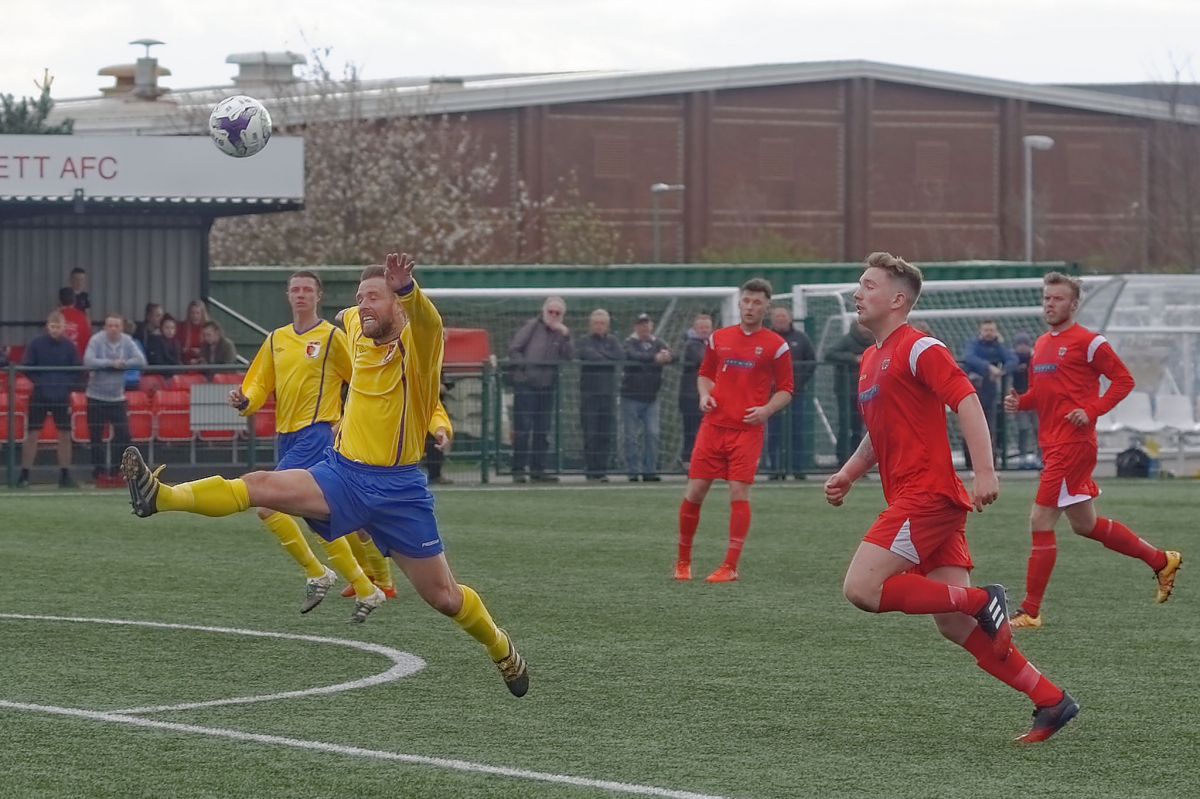 Sunderland RCA travelled to Consett today for our final away fixture of the season. Consett - currently sitting in 7th position in the table with 65 points - had a good win 4-0 at home to Penrith on Easter Monday, but lost 6-3 at Shildon last Saturday.

After an 11 day break, RCA were looking to bounce back from successive defeats to Marske United and Jarrow Roofing.

Interestingly, for fellow statisticians, in RCA’s 40 matches in the league so far this season, the points total of 54 is equally split, with 27 points gained both at home and on the road.

The reverse fixture, back in November at Meadow Park, was an epic 3-3 draw in a match that swung back and forth.

RCA made one change to the side that lost to Jarrow Roofing - Craig Hubbard replaced Ross Preston, with Colin Larkin moving into the centre of defence to partner Greg Swansbury.

The match got under way and it was Consett who went straight on the attack as Craggs made a run through midfield before releasing Sullivan but the ball was too far in front of the striker and went out for a goal-kick. In the 10th minute, RCA had a great chance to open the scoring when a cross from Charlton found Butler in the six-yard area but his shot went wide of the post. One minute later and RCA won a free-kick midway inside the Consett half after Charlton was tripped - Larkin’s kick went over the crossbar. Three minutes later and RCA had another great chance to open the scoring as Noble played a lovely ball down the right to Butler who played in Cassidy who side-footed the ball wide from inside the penalty area. In the 18th minute Armstrong looked to have tweaked a hamstring and was unable to continue, and was replaced by Brad Wilson. One minute later and a driving run down the left by Cassidy forced a corner which was headed over the crossbar by Callen on the edge of the six-yard area.

In the 24th minute, Consett won a free-kick midway inside the RCA half after a foul by Hubbard - the free-kick was lofted in by Craggs but Sullivan’s header was held comfortably by Carmichael. In the 31st minute, RCA made the breakthrough their play in the opening third of the match had deserved - RCA won a corner down the right and Noble's corner was met, unchallenged, by Callen who headed the ball home from six yards for his 20th goal of the season. Brilliant stuff! RCA kept up the pressure on the home side as first Charlton played the ball into Noble, whose cross was very well held by Coombe under pressure from Butler - and then another cross, this time on the RCA left, from Cassidy was again held by Coombe.

After a below-par first half showing, Consett went straight on the attack at the beginning the second - a cross in from the right reached Sullivan, whose shot was blocked for a corner. From the corner, the ball was headed just wide by Slocombe. In the 52nd minute a long ball from the back was brilliantly controlled by Callen but the ball was cleared for a corner, which, in turn, was cleared. Three minutes later and RCA came extremely close to doubling their lead - Noble delivered a terrific cross which caused havoc in the Consett defence with Callen and Butler going close before the ball was cleared. Noble then proceeded to deliver another equally good cross which again was cleared. In the 58th minute, Sullivan made a good run through midfield and fired in a shot from the edge of the penalty area just wide. One minute later and this time it was Teasdale who fired in a shot from distance over the crossbar. And two minutes later Sullivan again fired a shot wide from a good position as Consett pressed to get a foothold in the match. Then Knowles made a good run down the right which was intercepted by an immaculately-timed challenge by McGuinness in the penalty area and away for a corner. The corner was wasted as it sailed over everyone for a goal-kick.

Midway through the second half and RCA doubled their lead - Hubbard picked the ball up in midfield before playing it forward to Callen on the edge of the penalty area, where the RCA striker held the ball up before turning his marker and firing in a super shot into the bottom corner of the net. Six minutes later and Butler had a great chance to all but wrap up the match - after being put clean through on goal Butler fired in a shot that was saved by Coombe and a follow-up effort was blocked and then cleared. However, Butler only had to wait a further five minutes to get on the score sheet - a long ball up to Callen was brought down with a delightful touch. Callen then played in Butler who raced onto the through ball and made no mistake with cracking finish from the edge of the penalty area. Two minutes later and Sullivan fired in a speculative effort from distance which went over the crossbar.

In the 83rd minute Swansbury went off injured and was replaced by Liam McBryde. The substitution resulted in McBryde going up front with Butler, and Callen joining Larkin in the centre of defence - a great sight to see RCA's two leading scorers this season playing as defensive partners, bringing back memories of the trip to Penrith right at the end of last season where Callen played centre-half and Larkin played the whole match in goal, keeping a clean sheet. Tuesday's team selection could be interesting given that it's Penrith who are again the opposition! With the match heading into stoppage time, RCA got a fourth as Butler was put through and in on goal and the RCA front man finished superbly placing the ball through the legs of Coombe. And then, in the final minute of the match, RCA amazingly grabbed a fifth as Butler was again put through on goal but this time he was upended in the penalty area and the referee immediately pointed to the spot. Larkin, RCA's regular penalty taker, handed the ball to Butler who coolly slotted the ball into the net to complete a remarkable 15 minute hat-trick and a 13th goal of the season.

A magnificent team performance from RCA today - right up there with our best of the season - and a thoroughly deserved victory against a very good side who usually give us an extremely tough game.

The result takes RCA to 57 points - eclipsing last season's total of 54 - with one match remaining.

The five goals mean we equal last season's goals total of 106 in all competitions.

The clean sheet was RCA's 13th of the season.

This was RCA's ninth away win of the season - the most since the incredible 16 away wins during the brilliant 2011-12 season.

A win for RCA on Tuesday, however, would guarantee a 10th-place finish which would be a great reward for the tremendous efforts of the players and management throughout the season.

To confirm, then: RCA’s final match of the season is at home to Penrith this coming Tuesday, 25 April, kick-off at 7:45pm. Please get along to Meadow Park and support the lads.