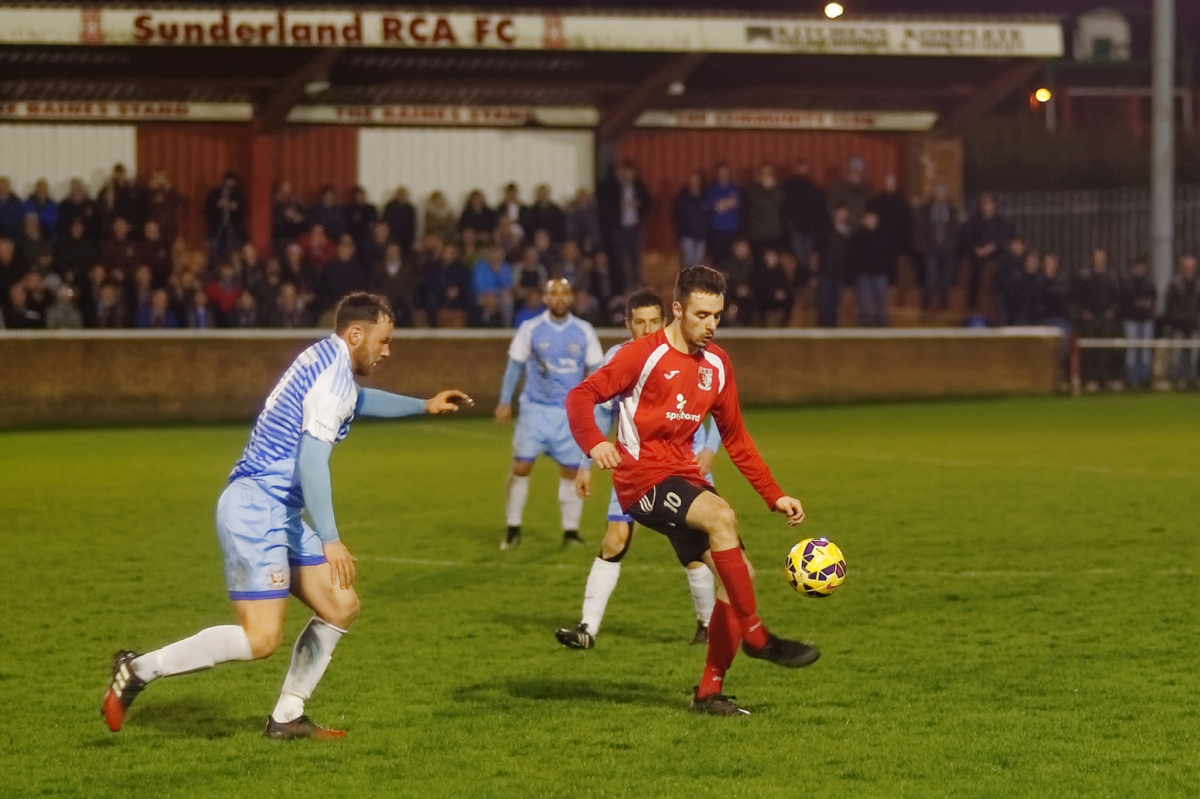 Stephen Callen on the ball in front of a bumper crowd at Meadow Park. Photograph: Simon Mears.

Video highlights from the game from South Shields.

The rags to riches story of Shields is well-documented: just a couple of years ago they were playing at Peterlee in front of a few dozen fans. And now - rightly back in the town - Shields have been regularly pulling in crowds in excess of one thousand all season, including a magnificent sell-out crowd of 3,161 as they demolished Newport Pagnell Town in the FA Vase Quarter Final - an irony not lost on all at RCA as we were beaten by Newport in the Fifth Round after missing a whole host of chances to finish off the tie, losing in extra-time, and missing out on a bumper pay day and setting up a potentially fascinating all-Northern League Quarter Final. Since then, Shields have, of course, gone on to reach the final at Wembley and are still, incredibly, chasing an unprecedented quadruple - with finals also to come in the Durham County Challenge and League Cups. Furthermore, after Shildon’s victory over North Shields last Saturday, the League title is also now back in South Shields’ hands - North and South Shields meet on April 8th in what may well turn out to be a title-decider.

RCA had a very good win at Seaham Red Star last Saturday and have recovered well since the immense disappointment of going out of the Vase - notwithstanding the odd blip at Newcastle Benfield.

Shields took their incredible winning run to 27 matches on Tuesday evening with a 4-0 victory over Newton Aycliffe.

Back in October, in the reverse fixture, RCA took a deserved 2-0 lead at Mariners Park as Shields were reduced to 10-men after a foul lead to RCA’s second goal - with only 20 minutes of the match remaining. Shields, however, threw everything at RCA in the latter stages and grabbed a late equaliser through a brilliant Julio Arca strike.

RCA had the rare opportunity to name the same XI that started the previous match at Seaham Red Star.

The match got under way with RCA kicking up the slope, but it was Shields who had the first chance of the match as Finnigan was released in on goal, chipping Carmichael, but the flag was raised for offside. In the 8th minute RCA took the lead with their first meaningful attack - Larkin was fouled on the apex of the Shields penalty area and took the free-kick himself. The ball was half cleared to the far post where Butler delivered a superb, whipped left foot cross and Preston rose to power a header into the net. Three minutes later and Finnigan was again put through on goal and collided with the onrushing Carmichael - both players received treatment but were able to continue. In the 13th minute Shields won a corner after some good play down their left. As the corner was about to be delivered Carmichael again went down injured and was treated briefly before continuing - the corner was cleared to the edge of the penalty area by the head of Swansbury and Stephenson’s shot was high and wide.

In the 16th minute Cassidy won the ball in midfield before switching play out to the right where Larkin’s cross was caught by Jameson. Four minutes later and RCA were awarded a free-kick for a high challenge on Larkin - again Larkin took the free-kick from the edge of the penalty area and Callen’s header went wide of the post. And a further four minutes on and Phillips made a run through central midfield before playing the ball out to Nicholson on the right but his cross was held comfortably by Carmichael.

With ten minutes to half-time, RCA won a free-kick after Cassidy was fouled breaking down the left. Larkin delivered the free-kick and McGuinness stabbed the ball wide, sliding in at the far post. Two minutes later and RCA won another free-kick after a foul on Armstrong. Larkin’s free-kick was cleared and Shields went straight on the attack down their left - the ball was played into Finnigan on the edge of the penalty area and was cleared by Cassidy for a corner. In the final few minutes of the first half, Shields were reduced to ten men. Nicholson challenged for the ball and as it broke the linesman flagged and called over the referee. After a brief consultation, the referee pulled out the red card for Nicholson. Other supporters stated that it was for stamping - although I didn’t see the incident, so cannot confirm this.

At half-time, Shields made a substitution - with Arca replacing Finnigan.

RCA had the first chance of the second half after a free-kick for a foul on Armstrong was cleared. In the 51st minute an Arca free-kick was cleared by Preston and a subsequent cross from the left was cleared by McGuinness. Three minutes later and Carmichael was forced to retire and was replaced in goal by Neal Bussey. Bussey was quickly called into action and, two minutes after coming on, raced to the edge of the penalty area and fouled Cogdon - the Shields players were furious, demanding that it should have been a penalty kick, but the referee awarded a free-kick right on the edge of the penalty area. In the end it didn’t matter as Arca superbly whipped the ball up over the wall and down into the bottom corner - a terrific strike, worthy of any level of football.

Midway through the second half and Shields were extremely unlucky not to take the lead after Richardson was played in on goal but his shot hit the base of both posts before rebounding into the hands of Bussey. But they didn’t have long to wait, and one minute later Shields had the lead as Cogdon made a run down the right and won a corner. Phillips’ corner was whipped in and dropped by Bussey to present Cogdon with a tap-in. For the final quarter of the match Preston was sent up front as RCA pressed for an equaliser and in the 75th minute a long ball from the back was flicked on by Preston but cleared for a throw-in. Three minutes later and substitute Davis played in a cross from the right which was headed down to Preston by Callen but the shot was straight at Jameson. And a further long cross, this time from Noble, was also headed straight at Jameson by Preston.

With five minutes remaining, and RCA throwing everything at Shields, another crossfield ball from Noble was met by the head of Swansbury on the edge of the penalty area but easily claimed by Jameson. With match moving into stoppage time, Ramsey went down injured after a challenge with Swansbury - after a lengthy delay he was stretchered off. Hopefully the injury isn’t as bad as it first appeared. In stoppage time, RCA had three excellent chances for a late leveller - first, a long ball into the penalty area was flicked on by Swansbury to the feet of Larkin whose effort was caught by Jameson at close range. Seconds later, a ball in from Charlton on the right fell to Cassidy who fired in a powerful shot from the penalty spot which was well saved by Jameson diving to his right. Then a cross was just too high for Preston and skimmed off his head for a goal-kick. Finally, deep into time added on, another ball into the penalty area dropped to Callen on the six-yard line but he fired over the crossbar.

An incredible 28th win in a row now for Shields, but my word RCA made it anything but easy and kept the pressure on the visitors right up until the 98th minute, when three glorious chances to equalise went begging.

It’s a quick turnaround now for RCA as we travel to Washington on Saturday.

South Shields have announced that Ramma has a broken tibia, that lad has had some bad luck with injuries over the years, here's wishing him a speedy recovery.