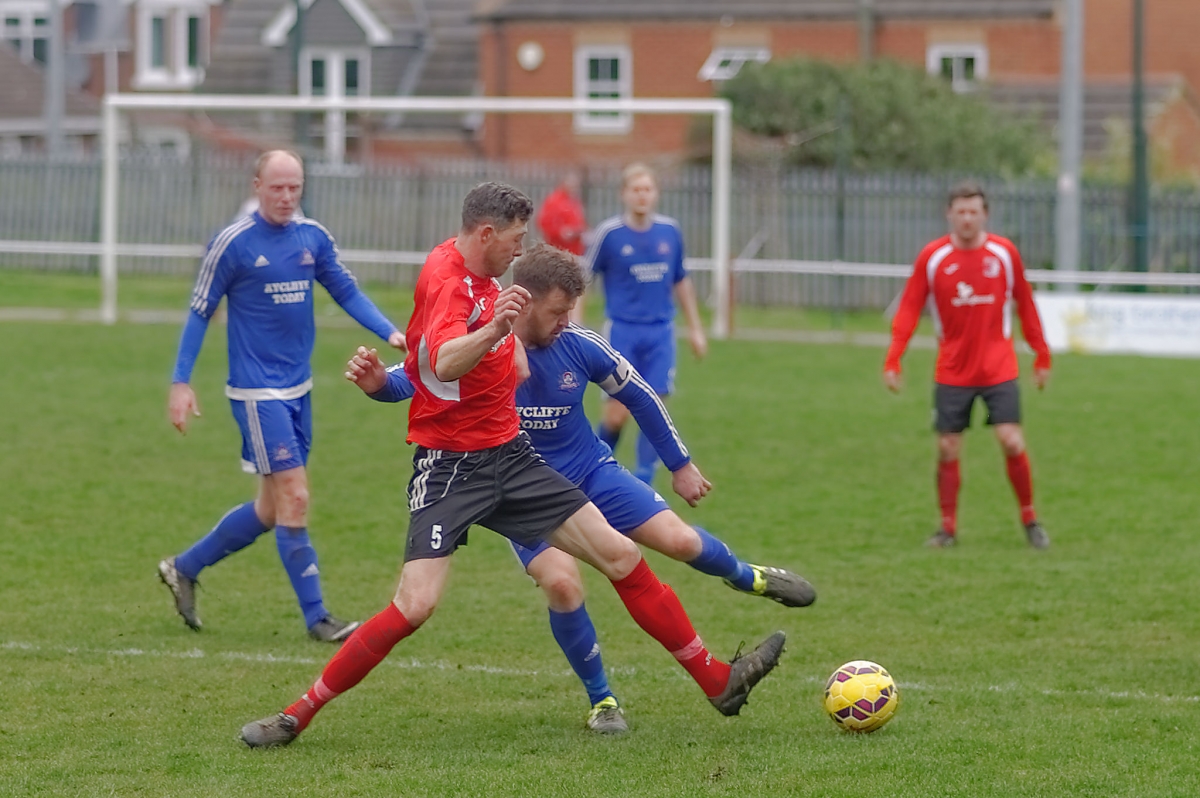 Newton Aycliffe had the first attack of the match, kicking up the slope, when Banks made a dangerous run down the left but his cross was behind the onrushing Aycliffe attackers and was cleared. In the ninth minute RCA had their first effort of the match as Callen down the left played the ball into Larkin, whose first-time lay-off found Butler, but his shot was fired over the crossbar. Ten minutes later and free-kick for Aycliffe was cleared by Preston for a throw-in. From the throw, early substitute Wood played the ball off Charlton for a corner that resulted in a shot from Mitton going tamely wide of the post. In the 27th minute a driving run by Owens was cleared for a corner which in turn was cleared by Larkin. One minute later and Larkin was again in the action, this time at the other end as his shot goalbound shot was deflected behind for a corner. From the corner Preston’s header was comfortably held by Pentony.

On the half hour mark a neat build-up from RCA as Callen down the left played in Larkin, who found Richardson with a lay-off, and then Hubbard fired in a shot that was deflected wide for a harmless corner. Two minutes later and again Larkin was the provider after his cross from the left was met with a header from Hubbard which was comfortably saved by Pentony. In the 37th minute Aycliffe had their best chance of the half as Owens was put clean through on goal with only Carmichael to beat, but his shot from the edge of the penalty area was, uncharacteristically, ballooned high over the crossbar. Two minutes later and RCA had the ball in the net - a cross from Callen was met by a Butler header and the ball bounced over Pentony but the goal was ruled out for a foul on the defender. And as half-time approached, RCA had a further chance as a Callen cross was met with a terrific volley from Larkin which flew wide of the post.

It was RCA who had the first chance after the break. Hodgson was fouled near the edge of the penalty area, but Larkin’s free-kick went straight through to Pentony. In the 54th minute a long free-kick from Pentony was met with a powerful header from Owens which was saved by Carmichael. One minute later and RCA were on the attack as Larkin made a good run down the left and crossed but the ball was headed over the crossbar by Callen. On the hour mark a long ball was flicked on by Butler to Callen who crossed but the ball was gathered by Pentony. Three minutes later and Butler set up Charlton for a shot just inside the penalty area that was saved by Pentony for a corner that was scrambled clear - as the RCA pressure to open the scoring intensified.

With 20 minutes remaining RCA won a free-kick for a foul on Hodgson - who was unable to continue and limped off to be replaced by James Armstrong. The free-kick, midway inside the Aycliffe half, was headed straight at Pentony by Callen. Five minutes later and Callen made a run down the right and sent in a lovely low cross along the six-yard line but no one could get on the end of it. With ten minutes remaining a rare Aycliffe second half attack saw substitute Oliver in on goal, but Carmichael was able to make a timely interception - the loose ball came back to the feet of Oliver who then shot wide.

In the 81st minute RCA came about as close as it is possible to scoring without actually scoring - Callen made a run down the right, checked, and crossed to the far post where Butler headed back into the six-yard area and Cassidy headed the ball off the face of the crossbar. The loose ball was again headed by Cassidy and Pentony looked to get something on the ball to deflect it up and off the crossbar once more. The ball then rebounded back out and Larkin, stretching, got underneath the ball and lifted it inches over the crossbar. Incredible! Two minutes later RCA had another great chance as Callen shot over the crossbar from a good position inside the penalty area. With two minutes left on the clock, RCA had very strong penalty appeals turned down - Cassidy got to a cross just before Pentony and went to ground but a corner was awarded. RCA’s final chance of the match came in stoppage time when Armstrong was fouled near the edge of the penalty area but Larkin’s free-kick was saved by the diving Pentony.

A decent match for a goalless draw - certainly a lot more entertaining than the recent goalless draw with Chester-le-Street. RCA will rue a host of missed chances throughout the match and being unlucky to hit the crossbar twice in as many seconds.

Next up for RCA is a trip to Newcastle Benfield this Wednesday, March 22nd. The original fixture was abandoned after 21 minutes and entry to the rearranged match will be free - with a voluntary donation to charity.

Alf's son came into the ground a minute or two before the minute's silence, for the first time since Alf took ill. When I told him it was going ahead he became emotional and asked me to thank the club for observing his Dad's passing. He thought no one ever noticed them as they just kept their own company.