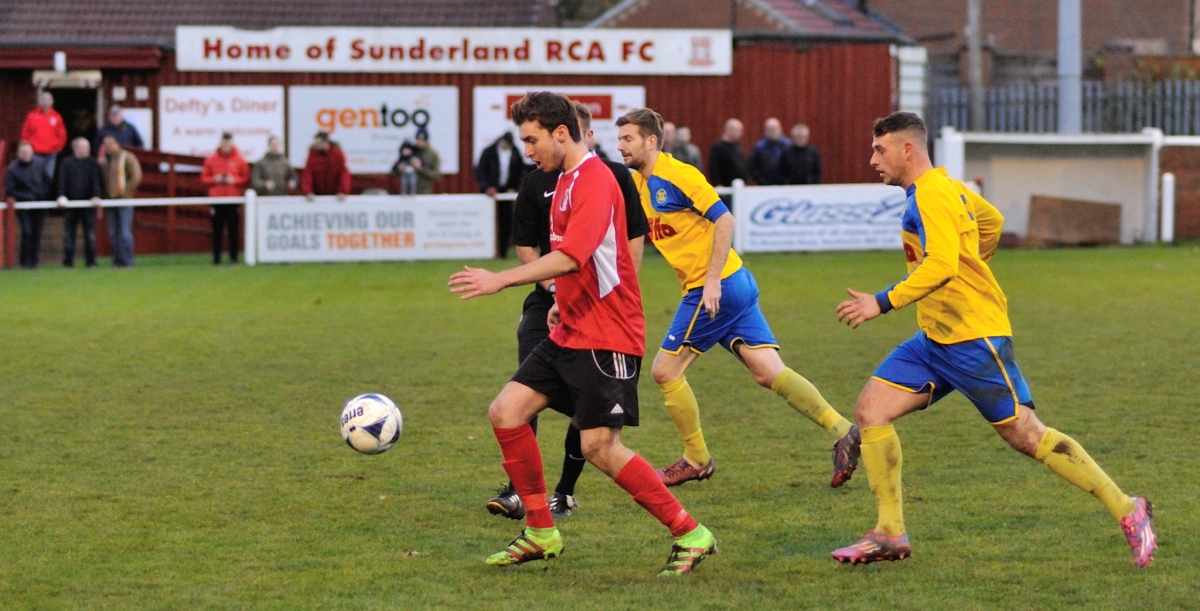 The visitors took advantage of the slope in the first half and as expected both teams took time to settle into the game during a cagey first ten minutes.

Stockton were the first to force any sort of meaningful attack in the 13th minute when a well worked move end with ath ball being forced behind for a corner, Scaife-Wheatley took the inswinging kick which forced Carmichael to palm away under pressure.

RCA broke away in the 15th minute with a ball from Larkin finding Martin on the right. The winger forced a throw in which was taken quickly to Davis who slipped past his marker to deliver a good cross but Coulthard reacted to get to the ball before Callen and clear up field.

Five minutes later a Stockton were awarded a free kick on the left. Scaife-Wheatley curled the kick to the box was headed onto the post by Hayes, the refell to Woodhouse who shot into the side netting.

Within minutes RCA looked to take the game to Stockton and when Callen latched onto a through ball from Armstrong he looked set to score, having out muscled his marker he elected to cross into the box rater than shoot and the ball was cleared by Coulthard, but it fell to Bultler on the edge of the box and the RCA striker made space for his shot but Arthur was well placed to make a comfortable save.

RCA were starting to get a bit of possession and in the 26th minute a Davis freekick was met by McBryde who headed it into the path of Butler, but he fired over the bar when in a good position.

In the final minutes of the half both keepers were forced to make good saves. Arthur from a shot by Callen and Carmichael at the other end tipping the ball over the bar from a shot by Hayes.

Stockton started well in the opening minutes of the half as they pushed forward, a long clearance by Arthur was picked up by Scaife-Wheatley who slipped the ball to Stockton but his shot went well wide of the target.

RCA came back at the visitors and a good cross into the box by Martin caused a bit of panic as the ball fell to Charlton he fed the ball out to Davis who crossed into the box, Carter managed to get a foot to the ball but it again fell to Charlton who sent in a thunderous shot which arthur did brilliantly to turn over the bar. From the resulting corner Richardson headed over to the relief of the Stockton defence who had left him completely unmarked.

Both teams were looking for that touch of class that was going to win this game and it was looking more and more likely that one goal would seal it as both defences looked very solid.

RCA were creating the better chances and the next one came when a throw in was picked up by Davis; he swung in a cross which was met by Butler who headed the  ball back across the six yard box, was completely missed by Charlton and fell to Gordon who tried to place his shot into the bottom corner but it was blocked by Hayes and cleared by Nicholson.

Stockton responded with a spell of pressure of their own. A freekick by Nicholson found Stockton on the right, he cut inside before setting up Hayes, but he shot high from 20 yards out. From the goal kick Nicholson won the ball a nd his header went straight to Woodhouse who sliced in a shot which was always curling wide of the upright.

In the final minute of normal time a through ball from Robinson was picked up by Butler who slid the ball on to Davis inside the penalty area but Arthur once again produced a fine save to block the ball for a corner. RCA had two more chance deep into injury time when a freekick was swung in by Cassidy to the far post where Larkin was able to control the ball but fired his shot into the side netting and then Callen curled in a shot which went inches wide of the upright.

The first half of extra time saw Stockton with the only two real chances. A good run by Carter on the right ended with a wicked cross which flew across the face of goal, but there was no one there to add the finishing touch. Then in the final minute of the first half of extra time, a corner was met by Nicholson who headed it down to Woodhouse but Carmichael was able to turn his shot over the bar.

The second period of extra time saw RCA more dominant and an early chance fell to Butler, but his shot was blocked by Nicholson.

In the 110th minute RCA took the lead when Callen broke into the box took the ball past Nicholson and was brought down by the Stockton skipper. The referee awarded a penalty which Larkin took and although Arthur guessed right the ball was struck too well and nestled in the corner of the net.

Stockton fought back but lacked the end product in the final minutes of the game and although it all got a little scrappy towards the end it was to be expected as players tired and RCA frustrated the Stockton attack. RCA had a great chance to finish the game off in the final minute of the game when Callen broke free of the Stockton defence, he unselfishley played the ball into the path of Butler who, instead of putting the ball onto the net decided to cut back inside and the opportunity was lost as defenders got back to clear the danger.

This was a hard fought win by RCA with a make-shift team. Stockton came on the back of some good results in this competition and can be proud of their achievements this year. We wish them well for the rest of the season and if they maintain this level of performance they wil be there or thereabouts for promotion.

As for RCA we progress to the next round of the Vase and see who we get out of the hat. This was not a vintage performance, but they dug deep and got the result in the end.

Next up is another cup tie, this time it is the League Cup against Northallerton Town on Tuesday, another home game for the fans.