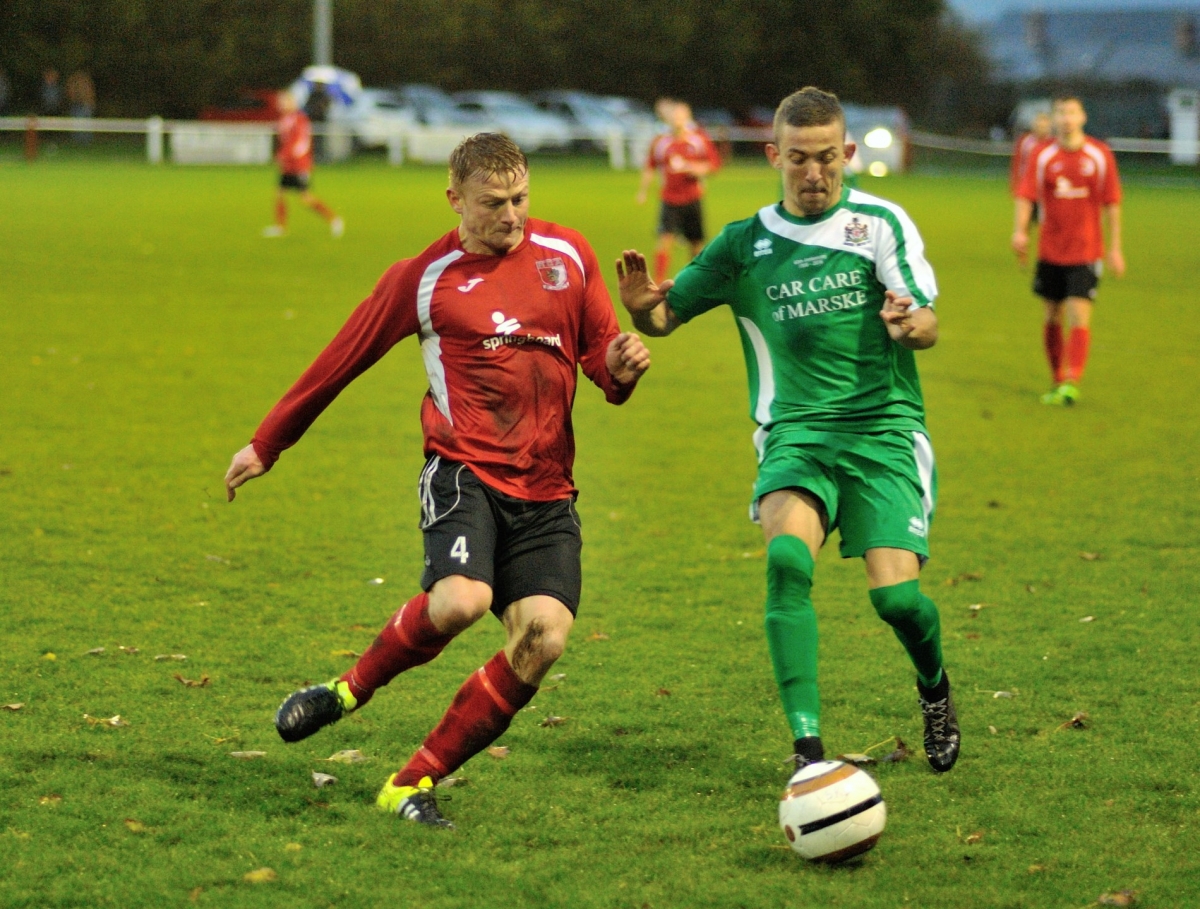 ​Ross Preston makes another important tackle during the second half of the match against Marske United.

The two new signings were included in the squad with Carmichael starting in goal and Robinson on the bench. The management team also brought back Hodgson after missing the Washington match last week.

On the injury front Cassidy was declared fit while McNab aggravated his back in the warm up and was ruled out.

Marske took advantage of the slope in the first half and were quickly on the offensice with Bulmer threading a ball through to Earl who fired over the bar. A minute later N Mulligan sent in a low shot which was blocked by McGuinness and went behind for a corner. Ramsbottom got his head to the corner, but could only direct it over the bar.

RCA's first real attack on the left was halted when Larkin was fouled 30 yards out. Larkin took the kick which he floated towards Callen, but Ramsbottom headed clear to Brockbank who sent a 40 yard crossfield pass to Earl who contrls the ball before squaring to Round, but the winger's shot sailed wide of the target.

In the 12th minute Richardson intercepted a long ball out of the Marske defence and played it forward to Martin on the left, the youngster skipped past two defenders before crossing into the box to Larkin but the normally clinical striker pulled his shot wide.

The visitors took the lead in the 19th minute. RCA conceded a corner on the right and the whipped in kick was met by N Mulligan and his powerful header flashed into the net via the crossbar.

RCA were almost level within a minute when a through ball from Butler was picked up by Callen who took the ball forward before shooting, but Ramsbottom made a good block to deny the home team. The goal seemed to have lifted RCA and they pushed forward looking for a quick reply and they didn't have to wait long. In the 23rd minute RCA were awarded another free kick on the right; this time Larkin picked out Callen at the far post and he headed home from six yards out.

After the initial 20 minutes RCA had fought their way back into this game and almost went ahead when Charlton played a great ball out to the left wing where Butler controlled it before crossing into the box for Callen, but he could only manage to divert the ball wide of the far post.

Despite the terrible conditions the two teams were playing some good attacking football, the game was swinging from end to end and it was Marske who had the next chance as a long kick from Dean was headed down into the path of Bulmer who hit a first time shot just wide of the upright.

Marske again picked up the tempo of the game and it was they who started to look the stronger team as the half progressed, however the goal that they scored in the 39th minute to take the lead is one the RCA keeper will not want to remember. An RCA clearance was picked up on the half way line by Butterworth who advanced unchallenged before firing in a shot from 25 yards out. The ball looked to be covered by Carmichael, but it slipped through his hands and between his legs before ending up in the net.

Two minutes later and the visitors were pressing forward again this time from a free kick Butterworth latched onto the ball and forced a tremendous save from Carmichael; the ball rebounded to Ramsbottom whose shot was stopped by the RCA keeper.

The second half got off to a great start for RCA when they Martin won a corner on the right, Larkin took the kick and Preston met the ball perfectly to send a powerful header out of the reach of Dean and into the net for the equaliser.

This should have been the lift that the home team needed to go on and win the game, but it worked in reverse as Marske took the game by the scruff of the neck and started to run the show.

Within two minutes of conceding the equaliser they were back in front and again it was a fluke of a goal. Marske won a corner on the right, the kick looked to be mishit to the near post where Larkin in trying to clear sliced the ball which somehow squeezed between the upright, McGuiness and Carmichael and found its way into the net.

It could have been so much worse for RCA five minutes later when Marske were awarded a freekick, Round took the kick and Earl rose above everone to win the header but the ball crashed off the crossbar and was cleared.

Marske's dominance at this time in the game was evident in the amount of chances they created Earl had two efforts which went wide, he then set up Butterworth but he shot straight at Carmaichael.

RCA were restricted to long hopeful balls forward, one of which found Callen who slipped the ball to Martin, the winger cut inside evading two tackles before squaring teh ball to Hodgson who fired in a low shot which went wide.

Back came Marske this time it was Newby winning the ball inside the centre circle before driving forward and unleashing a long range effort whichwas well held by Carmichael.

The vistors increased their lead in the 76th minute when a terrible back pass by Swansbury was intercepted by Earl, his shot was blocked by Carmichael as he closed down the angle but the ball fell to Bulmer who deftly chipped the ball into the net.

The final ten minutes of the game saw Marske create more chances as RCA seemed to wilt under the constant pressure, to be fair RCA were trying their best to muster up attacking options but the visitors were winning almost every 50-50 ball and had nearly all the possession. Mulligan headed into the side netting, Risborough forced two reaction saves from Carmichael and had two shots blocked as Marske finished the game the stronger.

A miserable day weather wise was made even more miserable by the amount of mistakes we made today. We gifted them three of their four goals and our overall performance never really matched the opposition.

However, it was good to see Cassidy back on the football pitch and hopefully his injury woes are behind him now. This was a baptism of fire for Robinson and he took a little time to settle into the game.