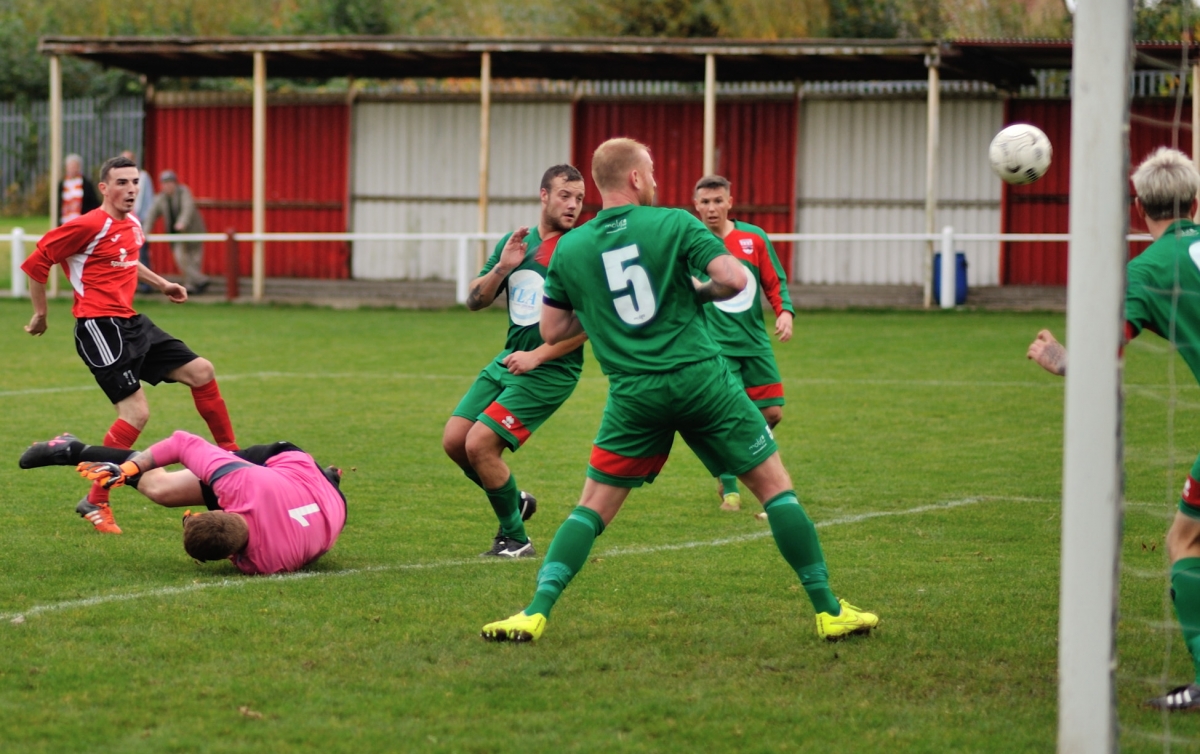 ​Kieran Martin finishes off a great run, smashing the ball into the net to give RCA victory against Washington.

​More photos from the match are here.

As the injury list shortens the team selection becomes more difficult. With Hodgson unavailable due to family matters and Davis unavailable due to work commitments, Armstrong and Callen were called into the starting eleven. The rest of the team had a very familiar look. There was also signs that Cassidy, McNab and Bussey would be fit in the near future.

The Washington team boasted no fewer than seven ex-SRCA players while the RCA team had six ex-Washington players in the squad. There was also the return to the club of ex-RCA manager Neil Hixon and his assistant Stephen "Buddy" Halliday.

The game got off to a blistering start with RCA taking advantage of the slope and immediately forcing a throw in deep in the Washington half. Richardson picked up the ball from the throw and played it forward to Charlton who fired in a shot which was well saved by Connor.

A few minutes later and RCA broke again down the right this time Charlton was the provider as he crossed into the box were Callen headed the ball down, but it was deflected over the bar, the referee inexplicably awarded a goal kick to the astonishment of everyone in the crowd.

Washington started to impose themselves on the game and a strong challenge by Brown saw the ball spring to Wightman, he squared the ball into the path of Brown, but his shot was saved by Harkess.

The next real chance of the game fell to RCA in the 15th minute when Armstrong played the ball to Larkin, he fed the ball to Butler and the RCA striker crossed into the box, but Drysdale was able to clear the danger .

RCA took the lead two minutes later when a cross into the box by Charlton looked to be easily collected by Connor, however the referee had seen a foul on Swansbury as he went to challenge for the ball and awarded a penalty. Larkin, taking over the responsibilty in the absence of J Davis, fired the ball into the net.

RCA took advantage of this stroke of fortune and pushed forward looking for a second. Another good run by Charlton saw him cut inside before chipping in a measured cross onto the head of Callen, but he was unable to generate enough power to trouble Connor who gathered the ball comfortably.

A minute later and another good move by RCA saw Martin skip past two challenges before squaring the ball to Butler, he in turn found Callen inside the box but he could only steer his shot over the bar.

It seemed to be all RCA with Washington reduced to quick breakaways and long balls forward for Wightman to chase.

On the half hour Callen had a shot well saved by Connor, his clearance up field was collected by Armstrong who was immediately fouled. RCA took a quick freekick which caught the "Mechanics" out as Larkin moved effortlessly past two half challenges before shooting low across the goal and out for a goalkick.

The visitors, having absorbed a lot of pressure looked to turn the game round and in the 35th minute  they won a corner on the right, Brown took the corner which was headed clear by Swansbury, the ball fell to Kane who fired a low shot through a crowd of players and luckily for RCA the ball struck a Washington player and was cleared by Preston.

Washington were on the front foot for the first time in the game and Wightman caused problems for the home defence two minutes later when he picked the ball up on the right before cutting inside and and shooting but Preston blocked the shot at the expence of a corner, the corner was taken by Lane and fell to Brown but he shot wide of the target.

In the final minute of the half RCA had a great chance to go 2 - 0 up when Martin picked up a through ball from Armstrong, managed to get to the bye line before crossing into the six yard area where Callen, at full stretch could only manage to hook th eball over the bar.

The opening period of the second half saw the Mechanics taking the game to RCA in an attempt to get an early equaliser, but they were struggling in front of goal as both Kane and Wightman were guilty of shooting wide when in good positions.

The pressure was starting to tell on the RCA back four and eventually in the 54th minute Washington scored and it was a belter. There seemed little danger when Kane received a pass from Shaw but the "Mechanics" striker took the ball forward a few paces before unleashing a thunderbolt of a strike from all of 35 yards which rocketed into the top corner of the net giving Harkess no chance.

RCA came back at Washington, Larkin played a quick one two with Armstrong before playing the ball into the path of Callen but he sliced his shot wide.

There followed a niggly period of play where a number of players were cautioned for minor indiscretions. Wightman produced a great cross into the box just before the hour mark but Kane's shot was easily saved by Harkess.

RCA started to get more possession as the half went on and Larkin was seeing more of the ball than most. In the 67th minute he played a lovely ball forward to Butler who slipped the ball inside to Callen but the RCA leading goalscorer leaned back on the shot and it flew over the bar.

Both teams made substitutions in an attempt to conjour up a winner and it was RCA who provided the sting in the tail, it was Larkin again who was the master planner, he picked the ball up from a long clearance by McGuinness, controlled the ball with one touch before releasing it to Martin on the right edge of the box, the RCA winger cut inside two players and with the Washington keeper advacing was able to smash the ball into the roof of the net to give the home side the lead in the 75th minute.

With the stuffing knocked out of them it could have got a whole lot worse five minutes later when Gordon found space on the right but flashed his shot wide of the post.

Washington picked up the tempo of the game as it entered the final ten minutes and although the had a lot of possession they never really tested Harkess in the RCA goal.

In the final minutes, RCA were able to take the sting out of the game by keeping the ball in the corners and exentually saw out the remaining minutes added on by the referee.

This was not by any means a classic, but both teams worked hard and showed enough to their fans to prove that they deserve to be in the first division.

At the end of the day a soft penalty was given, but it was still a penalty; the two other goals from Kane and Martin were superbly executed and well worth the entrance money.

Next up for SRCA is Marske United on Saturday at home.