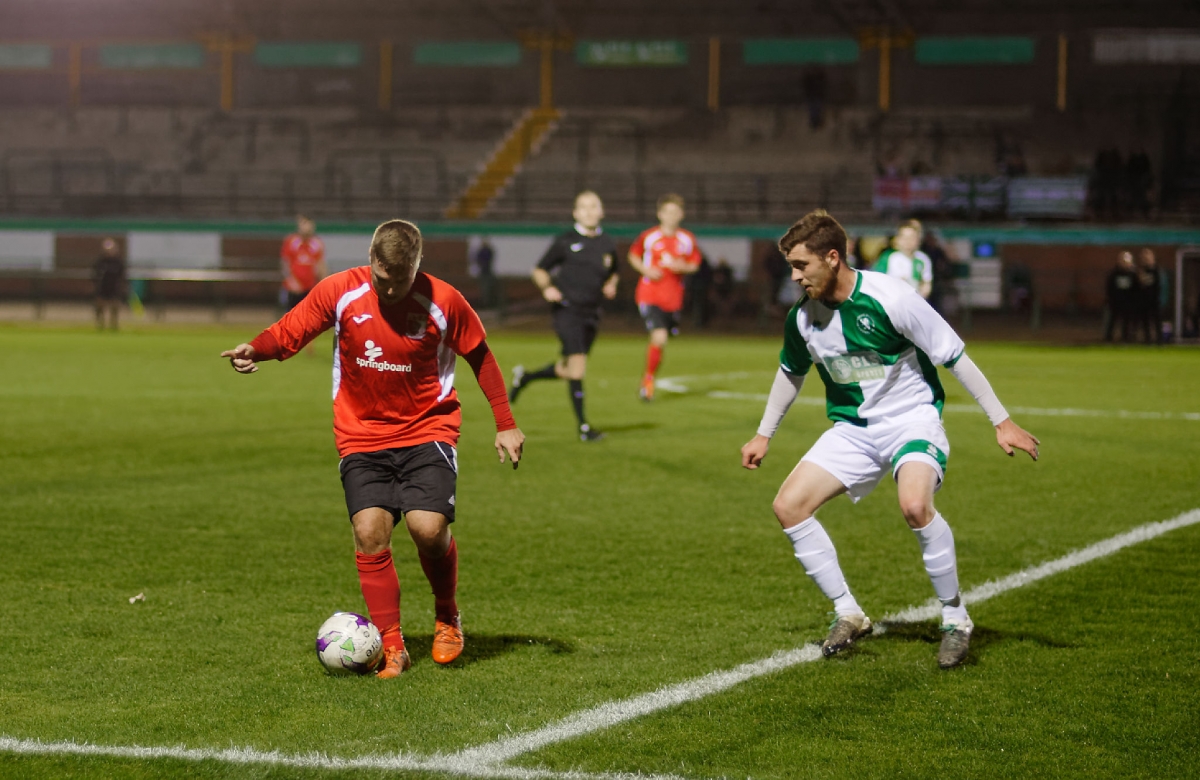 RCA travelled down the A19 to play second division Billingham Synthonia in the first round of the Durham Challenge Cup and the management team made a few changes to the starting eleven, in came Charlton, J Butler and J Davis.

The visitors took the lead with their first attack of the game when a long ball forward from McGuinness fell between Synners two central defenders and J Butler took advantage of their hesitation to lob the ball over the advancing McLaren. Buoyed by this early success RCA pushed on and started to put together a number of promising moves. J Davis found Martin on the left and his ball into the area fell to Larkin but he snatched at the shot and it flew wide.

In the 18th minute RCA thought that they had increased their lead when a cross into the box seemed to deceive McLaren and, under pressure from Charlton, he punched the ball into his own goal. However the referee saw an infringement and awarded a free kick to the Synners keeper.

Within minutes the home team were level. Wilson won the ball on the half way line, skipped past a challenge before crossing into the box, the ball looked to be dealt with by the RCA defence, but a scramble ensued when the clearance seemed to hit a defender and Crust was on hand to stab the ball into the goal.

Wilson was starting to see a lot of the ball on the left and RCA were finding it difficult to cope with his surging runs and in the 28 minute, with the RCA defence rooted to the spot he again produced a turn of foot which won him the ball before sending in an inch perfect cross which was met on the half volley by Langstaff and the ball smashed into the roof of the net.

RCA’s only real response was from set pieces. A corner by J Davis was cleared to the edge of the box where McGuinness struck a first time effort of the bar.

Not to be out done Synners went down the other end and a cross into the box by Wilson was headed against the post by Craggs.

The second half saw RCA committing men forward to try and get the equaliser, but to no avail and it was Synners who almost scored from a breakaway, when the ball was played forward quickly to Brunskill who won a throw on the right, the long throw was met by Peacock who fired in a shot which Harkess did well to tip over the bar.

Back came RCA this time Larkin made space for himself on the right before crossing into the box where J Butler met the ball with a well-timed header buy McLaren managed to palm the ball away. In the 65th minute of the game RCA made a double substitution bringing on Armstrong and Stephen Callen who was making his 100th appearance for the club.

Within a few minutes of his arrival Callen combined with Larkin on the edge of the box before sending in a curling shot which brought a tremendous fingertip save from McLaren.

It was all RCA as an attacking force with Synners defending valiantly, a great run by Martin saw him skip past three players before losing the ball inside the area, the referee waved away his protests for a penalty.

With time running out Richardson picked up the ball on the half way line and ran at the heart of the Synners defence before slipping the ball to Callen who fired in a shot which was again well saved by McLaren.

Another disappointing result with few positives other than Charlton and Armstrong getting much needed game time.