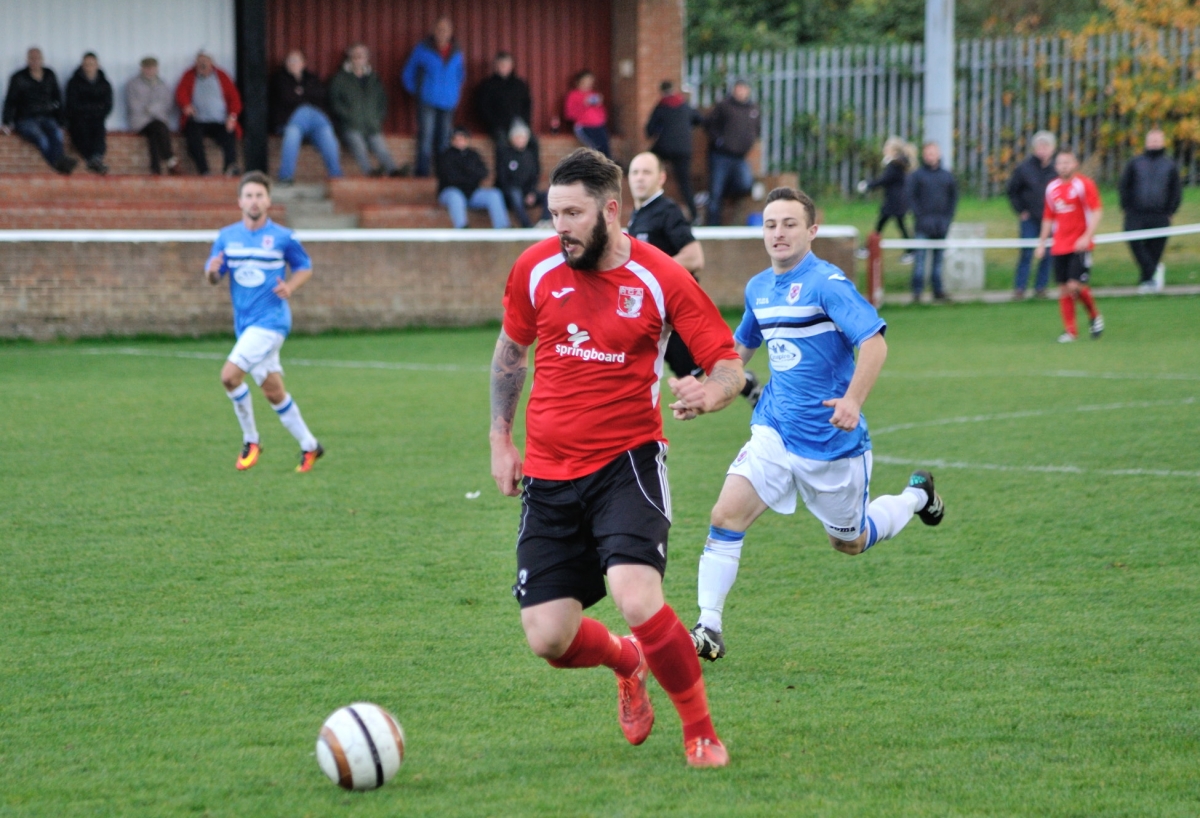 ​Adam McGuinness on the attack during the match against Seaham Red Star.

The management team almost had a full squad to choose from for the match against near neighbours Seaham Red Star. Only McNab (back), Cassidy (Knee) and Bussey (Fractured Ankle) were on the injury list. The return of so many players made the task of selecting the team a little more difficult and following on from last weekend's fantastic performance against Newton Aycliffe the manager kept faith with the majority of that team, with the only change being the retuurn of captain Swansbury to replace Cassidy.

Seaham took advantage of the slope in the first half, but it was McBryde who carved out the first opportunity in the opening minute when he collected a through ball from Callen before hitting a low shot which Newbrook saved.

The visitors reciprocated in the next minute when Newbrook's kick was headed down by Palmer to Bird who swivelled on the edge of the box before driving a low shot which Harkess did well to smother.

As the game settled down it was the Red Star who created the better chances with the on-loan Byrne producing a save from Harkess after Kerr had played in good ball to him.

Five minutes later and an RCA attack down the right by Martin was halted by Donnelly and the ball played out to Kerr, again his forward pass was met by Byrne but he shot straight at Harkess.

With 20 minutes gone RCA started to create some chances of their own. Hodgson played the ball wide to Gordon who crossed into the box but Galbraith was on hand to head away for a corner, Larkins corner was half cleared by Walker but fell to Preston ion the edge of the box but he shot wide.

RCA were starting to apply a little pressure of their own now and some great interplay between Callen, Martin and Larkin set up McBryde but a desperate tackle by Galbraith blocked the final shot denying and almost certain goal.

On the half hour Gordon forced a corner on the right, Larkin took the kick and there followed a massive goalmouth scramble, Martin had a shot blocked then a mishit shot by McBryde fell to Preston inside the six yard area, but his shot was blocked on the line by Walker.

In the 35th minute RCA had a shout for a penalty when a Larkin corner was headed by Swansbury and Scorer's hand appear to block the heared away from goal, neither the referee or the linesman were impressed by the appeal.

Having withstood the pressure Seaham came back into the game and a long diagonal ball by Price was picked up at the far post by Walker but he complete miss timed his shot and it flew wide of the target.

The visitors opened the scoring in the 40th minute when Kerr found Bird on the edge of the area. The diminutive winger turned and fired in a shot which drifted across the helpless Harkess and settled into the bottom corner of the net.

RCA looked for a quick response in the second half and almost had a dream start when they were awarded a free kick on the edge of the box, After some debate McGuinness stepped up to curl a delightful curling shot which struck the ange of the post and bar and was cleared by Scorer.

A ball into to box by Richardson was dropped by Newbook who recovered to collect the ball under pressure from Larkin; the visitors' keeper was obviously hurt by the collision and had to receive extended treatment before being allowed to carry on.

The delay seemed to give Seaham a lift and it was they who created the next attacking move when Kerr intercepted the ball and played a delightful ball to Bird who held up play long enough for Palmer to get into position but he fired well wide of the RCA goal.

With 70 minutes gone RCA were awarded a corner which was taken by J Davis. The cross was met at the front post by Preston whose glancing headed was cleared off the line by Price, the ball fell to Larkin who hit a bouncing shot toward goal but once again Price was on hand to scoop the ball clear.

The home team were building up a head of steam and the visitors were defending desperately. In the 68th  minute RCA were awared a free kick on the edge of the box which McGuinness took firing the ball low through the wall, but Newbrook was alert to the danger and amde a comfortable save at the near post.

RCA were level in the 80th minute when a goalmouth scramble saw C Davis clipped from behind before being brought down inside the penalty area, the referee awaeded a penelty immediately despite the protests of the defenders. J Davis stepped up to cooly slott the ball into the corner past Newbrook.

Within minutes Kerr picked up a loose ball inside his own half and seeing Harkess off his line, tried and audacious chip which landed on the roof of the net.

In the dying minutes both teams came close to stealing all three points. Bird sent in a cross which was missed by three team mates when a touch would surely have meant a goal and a a great piece of interplay between Martin and Callen saw the winger fire just wide of the target.

Both sides had chances to win this game and on balance a draw was a fair result, given the two differing halves produced by the teams. Seaham shaded the first half and RCA dominated the second.

Bonus points from the game today are that Callen looks almost back to his best and Larkin looks sharp and back to the player he was last season. We are looking solid defensively if a little gung-ho at times and we need to learn to be patient and not force games. Results will come if we continue with performances like our last two.