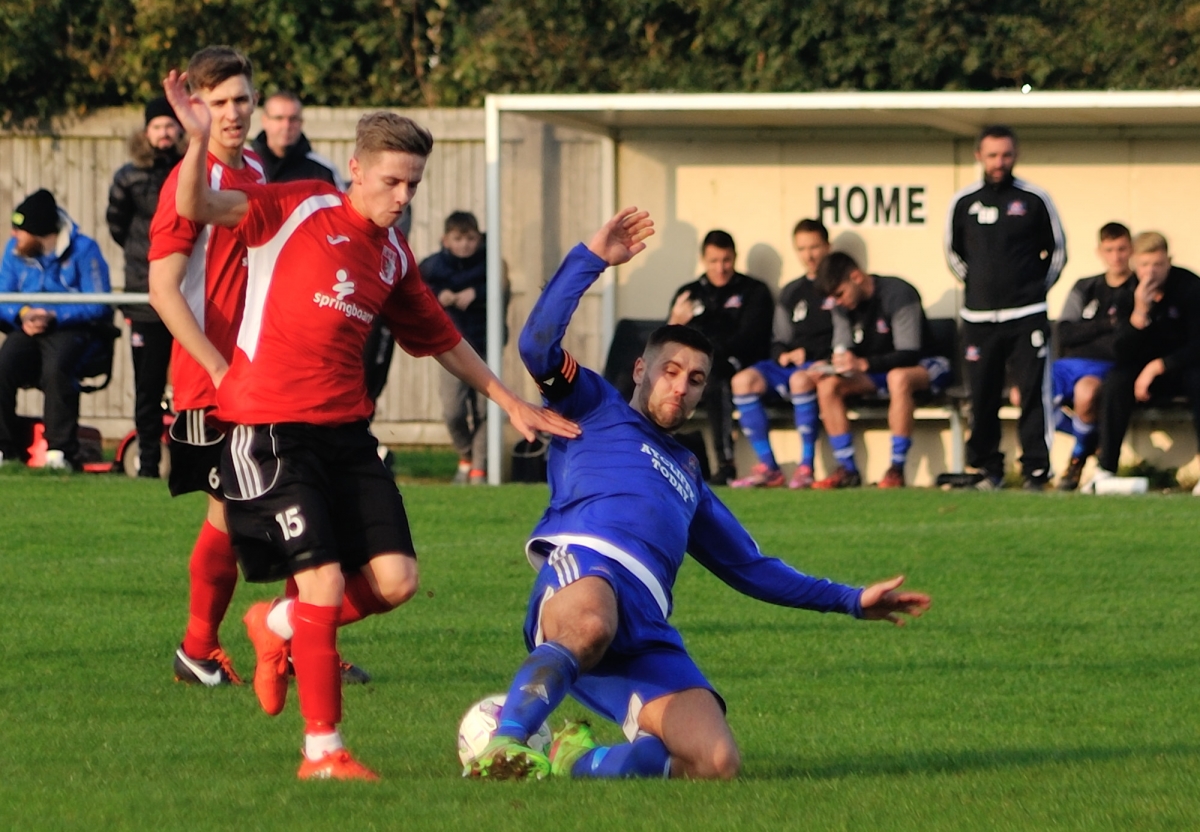 ​Kieran Graham in action during the second half of the match against Newton Aycliffe.

With five players on holiday and three on the injury list it was a miracle that we could field a team at all but on paper this looked a competitive team. There were a number of players still carrying niggling injuries and it was a test of their character that they were willing to play through the pain barrier.

RCA almost had a dream start when they were awarded a freekick 35 yards out. McGuinness took the kick and it was met by Callen who headed it to Preston; he controlled the ball before drilling in a low cross which Kitchen managed to clear with both Callen and McBryde ready to pounce.

Aycliffe responded with a good move which saw Laidler win the ball in Midfield before slipping it to Close. The ex-RCA player sent a lovely weighted pass to Boaggy who took the ball in his stride before hitting a low shot which went straight into the arms of Harkess.

The home team continued to press forward and RCA were forced to defend in numbers. In the tenth minute a through ball from Laidler found Campbell unmarked inside the area, but his side footed shot was turned round the post for a corner. From the corner the ball was headed down by Kitchen to Wood who turned and shot, but it went inches wide of the upright.

Having weathered the early pressure from the home team RCA started to get their passing game together and when Callen headed the ball into the path of Martin he cut inside two defenders before his shot was blocked by Varga, the rebound fell to Richardson who curled in a cross which was well held by Winter in the Aycliffe goal.

Two minutes later and Larkin won the ball in the centre circle, saw the run of Callen and played a sublime ball into the box, unfortunately Callen’s first touch let him down and the ball ran out of play.

It was RCA who were making the running at this point and another move started by Larkin, saw him play the ball forward to Martin, he was well tackled by Varga, but the ball fell to McBryde who played the ball square to Callen and the RCA striker drove in a low shot which forced a save from Winter.

RCA were putting together some good passing moves and in the 23rd minute one of these saw Gordon and Cassidy combine on the left before Cassidy played the ball to Larkin who dropped a shoulder, wrong footed his marker and played a great ball into the box but McBryde could only volley over the bar.

It was then the turn of Aycliffe to apply the pressure as the game shifted to the other end of the pitch, where Close played the ball wide to Campbell, he played the ball across the box to Laidler but his shot lacked real power and Harkess picked up the pieces.

On the half hour mark Wood had a great chance to open the scoring, Garthwaite won the ball in the centre of midfield and played it to Boaggy who in turn slid the ball to Wood but his snap shot went into the side netting.

Aycliffe took the lead during this spell of pressure when Close again played the ball out wide to Cambell, this time he drifted inside before unleashing a terrific shot which flew into the top corner of the net giving Harkess no chance.

Within two minutes it could have been 2 - 0 to Aycliffe when Brown played the ball forward to Garthwaite, his angled cross was missed by the outstretched foot of Wood and evaded everyone else before going out for a goal kick.

Larkin looked to relieve the pressure on RCA with a trademark run out of midfield, having skipped past the last defender he crossed the ball into McBryde who met it on the half volley but Winter pulled off a miraculous point blank save and then managed to collect McBryde’s second shot before it crossed the line.

Back came Aycliffe and in the final action of the half Wood again fired into the side netting.

Both teams started the second half looking to attack, Aycliffe had the first chance of the half when Close played the ball forward into the path of Garthwaite but he blasted his shot over the bar.

In the 50th minute, RCA were awarded a freekick which Larkin took, the ball fell to Graham on the edge of the box and he curled in a shot which went over the bar.

The game became a little scrappy as the defences of both teams got on top and there was little goalmouth action until Aycliffe increased their lead in the 64th minute. Garthwaite broke into the box on the right and Gordon was adjudged to have fouled him. The referee awarded a penalty which Campbell fired low to the bottom right corner and although Harkess got a hand to it he could not prevent it from going into the net.

RCA almost got a goal back immediately when a long ball forward from Preston was headed on by Callen to Martin, his cross into the box was met by Larkin but Winter was able to make the save diving to his left.

The visitors did get a goal back a minute later when a straightforward ball forward was picked up by Callen, he drifted past his marked before stabbing the ball into the net under the body of Winter.

Two minutes later and RCA were awarded a penalty when Martin was fouled inside the penalty area, Larkin stepped up but Winter pulled off another tremendous save tipping the ball round the post for a corner. Larkin took the corner and McGuinness rose above everone else to power a header into the top corner of the net to level the scores.

Aycliffe were completely transformed, from being a team full of confidence they looked shattered and RCA were running the show now. In the 75th minute Hodgson won the ball and played it to McBryde, he clipped the ball into the path of Callen who in turn played in Graham, the RCA substitute cut inside, evaded two challenges before curling a delightful shot inches over the crossbar.

Totally against all expectations RCA took the lead in the 78th minute when Larkin picked out McBryde on the left hand side of the penalty area, the RCA striker drifted inside before sending in a low drive which Winter managed to get a hand to but the ball squirmed under his body and over the line to make it 3 – 2 to RCA.

The final ten minutes of the match were played out with RCA retaining possession and Aycliffe unable to get any meaningful attempts on goal.

This was a great result for the lads. They battled hard and got their just rewards in the end, Larkin was outstanding in this match but his contribution was helped by a brilliant team performance.

It was a peculiar game to analyse as both teams had long spells of pressure and both teams had chances which were not taken but it came down to one team, RCA, sticking together as a team and battling the odds. At 2 – 0 down they could have been forgiven if their heads went down, but they didn’t.