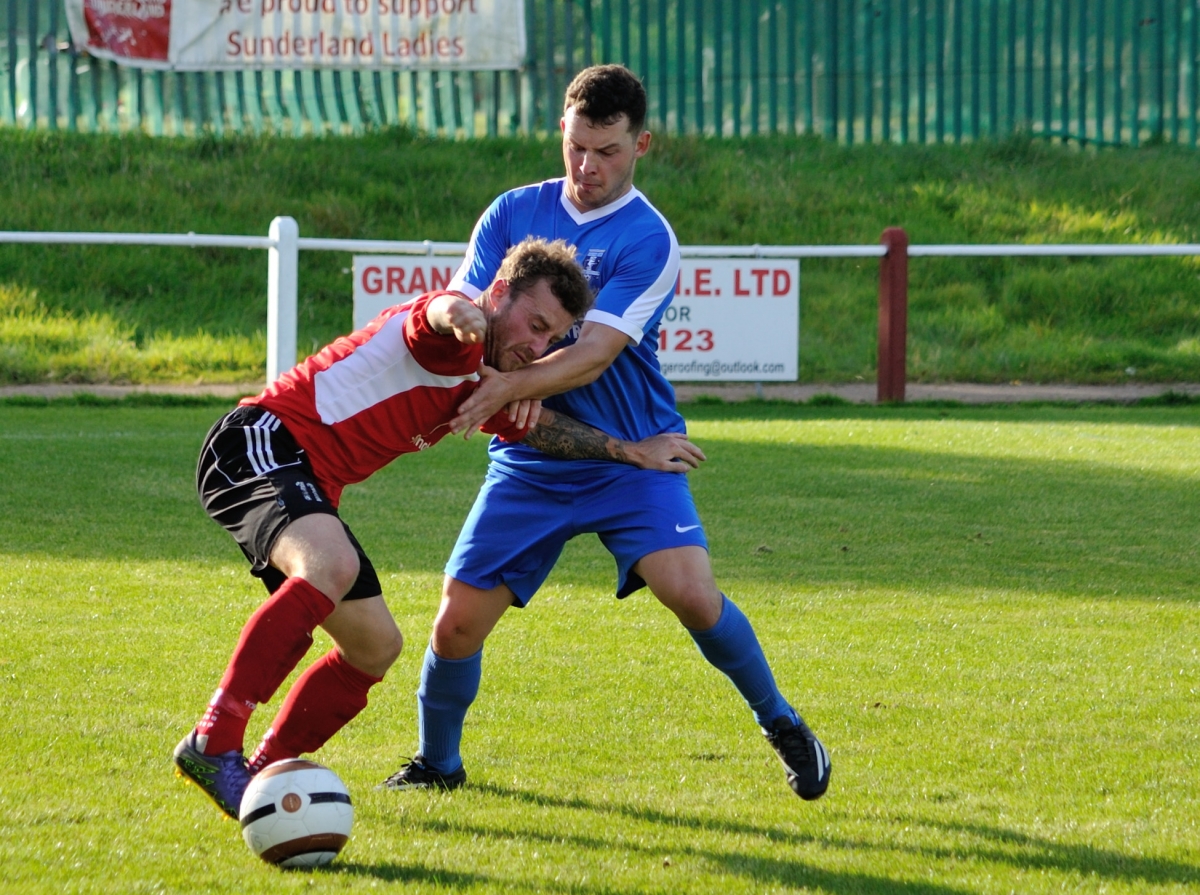 Club Captain Clayton Davis holds off a Dunston defender during the 2 -1 defeat.

Some good news on the injury front as Stephen Callen returned to the squad for the match against Dunston UTS and after limping off on Tuesday Liam McBryde declared himself fit enough to go on the bench. Into the starting eleven came Clayton Davis.

The game started well with both teams playing some good attacking football but equally both defences were managing to stop any real goalmouth opportunities to the opposition. It wasn’t until the 16th minute that there was a shot on target and it came when McNab played a one two with Butler before sending in a cross which was met by the unmarked Hassan, but his header went straight into the arms of Holden.

There was little to choose between the two teams as they tried in vain to breakdown stubborn defences. Dunston had set up with only one attacker and unfortunately had to make a change when Heslop went off injured to be replaced by the free-scoring Morien.

RCA should have taken the lead on the half hour when Hodgson won the ball in midfield and played the ball out to C Davis who laid the ball to Richardson who whipped in a cross which deceived the Dunston defence, but Hassan, with the goal at his mercy, missed the ball completely and it was cleared up field.

Dunston’s best chance of the first half came from a well worked freekick on the edge of the box. Burrell played the ball into space on the right where Drane fired in a low cross which flew beyond the far post with three Dunston players unable to get a touch on the ball.

The half ended in a flurry of activity for RCA when a throw in by McNab was chested into the path of C Davis by Butler the RCA winger fired in a dipping shot which went narrowly over the bar and a minute later a crossfield ball from Larkin was volleyed goalward by J Davis, but Holden made a comfortable save.

The second half saw a much more open game, With RCA pushing forward with the advantage of the slope. A good move involving McNab, Hodgson and Larkin, saw the ball reach J Davis on in the edge of the box but his shot was blocked Capewell. In the 54th minute Dunston took the lead with the simplest of goals. Smith broke down the right before crossing into the area, Guthrie looked certain to collect, but the ball bounced from his grasp and Lucckock was on hand to fire the ball into the net. Dunston took heart from this and started to put pressure on the RCA defence. A Morien freekick was deflected and the resulting corner was headed down by Capewell and a goalmouth scramble ensued with Guthrie eventually grabbing the ball off the foot of Luccock.

RCA bounced back and in the 62nd minute equalized when Hodgson found J Davis on the right, he dropped the ball off to Richardson who crossed the ball to the back post where Butler managed to direct a header back into the danger zone, Larkin was first to reacted and he hit a shot which went in off the post.

Within two minutes RCA could have taken the lead when a quick breakaway by C Davis down the left saw him play the ball into the centre of the goal where J Davis squared the ball to McBryde, but his angled shot went just past the post.

RCA were turning the screw and another move down the right saw Larkin feed the ball to Richardson who drove in a low cross which Holden saved at the feet of McBryde. At the other end Dunston showed that they were not finished as an attacking force when a ball forward by Gilhespy found Smith in space but his shot was saved by Guthrie.

With five minutes left on the clock RCA should have wrapped the game up when the three substitutes combined. Martin won the ball on the left and skipped past a defender before sending in a cross which was chested down by McBryde into the path of Callen who fired in a terrific drive which Holden appeared to tip over the bar. The referee gave a goal kick.

Holden sent the kick forward and Dunston were awarded a free kick near the half way line. The ball into the box was not cleared properly and it fell to Burrell on the edge of the box and he blasted the ball home to give the visitors a 2 – 1 lead. There was still time for another chance for RCA this time it was McBryde supplying the cross into the box for Larkin but the RCA striker was unable to keep the ball down and his shot flew over the bar.

This was another game where missed chances have cost us points. On the positive side Callen’s return showed that he is still eager to get on the score sheet, McBryde seemed to come through unscathed and new signing Martin looks full of pace. but might have to curb his temperament.

Next up on Wednesday is the League Cup match against Esh Winning who appear to be going through a little resurgence under new management.