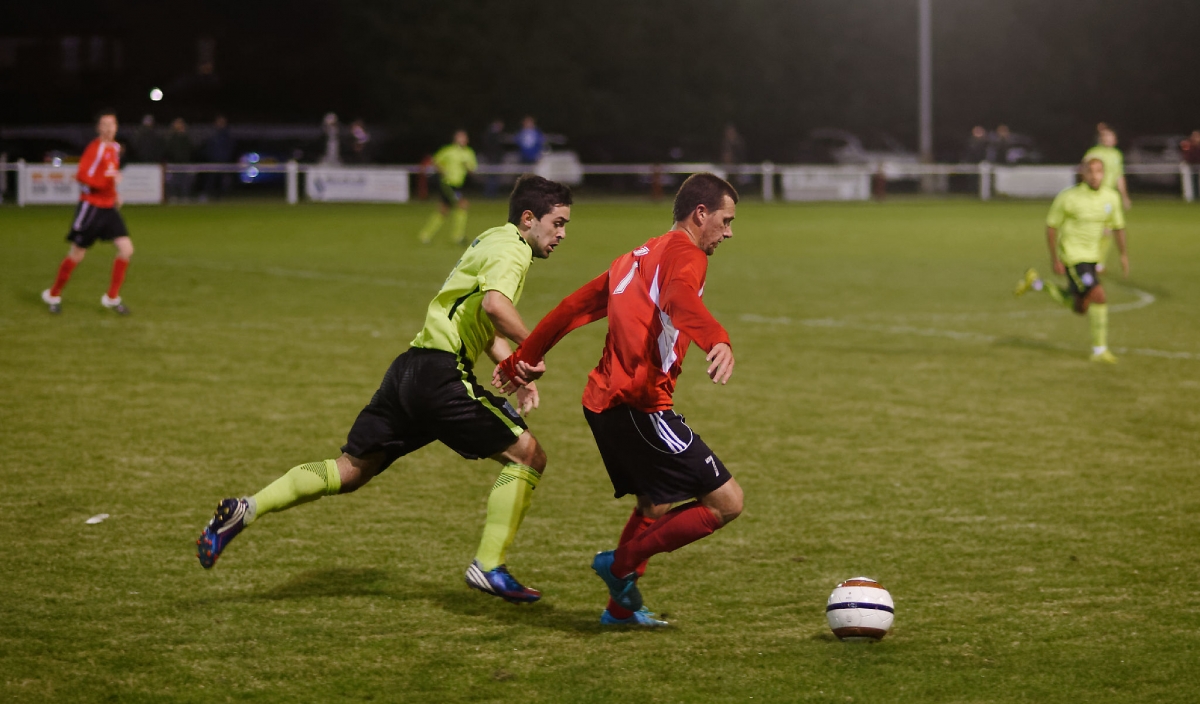 ​Goal scorer Colin Larkin in action during the 2 -1 win over Bishop Auckland.

Injuries continue to blight the season with the latest to join the queue being Michael Charlton, there are currently ten players receiving treatment which meant that we were down to the bare bones with only 13 fit players and two registered coaches available for the match against Bishop Auckland.

After their historic win against Farsley Celtic in the FA Cup on Saturday the visitors also had injury problems the most notable was the absence of Andy Johnson from the 16.

The game kicked off on a lovely evening with RCA taking advantage of the slope in the first half, the visitors however were quickly into their passing game and proving why they are such a difficult team to play against.

Bishops had the first real chance of the game when after a spell of passing which saw the ball switched from the right to the left wing before Hoganson played in Elliott, his low drive was well saved by Guthrie.

With both teams settling into their passing game it became a bit like a game of chess as the ball was moved around the pitch at pace by both teams.

RCA broke the deadlock in the 14th minute when a Bishop attack broke down near the corner flag, good play saw the ball played forward to McBryde who sent a long looping ball into the path of Larkin, who looked up and seeing Wilczynski racing off his line lobbed the keeper and the ball dipped under the crossbar and into the net.

The visitors, clearly shocked by this turn of events, produced another good passing move which started with Madden and included Hoganson and Elliott before the ball was passed out to Nicholls, his cross was palmed away by Guthrie and fell to Bennett who hit the ball first time but Preston was able to block and the ball was cleared.

Not to be out done RCA started their own attacking move from the back when Swansbury played the ball to Butler, he flicked it on to Larkin who fired the ball across the box, Madden got to the ball first but his clearance landed at the feet of Hodgson unfortunately his shot lacked power and Wilczynski was able to smother the ball.

Bishops continued to press forward looking for the equaliser, but for all their possession they were lacking in the final third and the RCA defence looked well able to contain the threat.

In the 28th minute RCA increased their lead when another promising move by Bishops was thwarted and they broke quickly, the ball was played forward to McBryde who controlled the ball before send a beautifully weighted ball into the path of Hassan who took one touch before cooly smashing the ball into the net giving Wilczynski no chance. 2 – 0 up might have flattered the hosts but they had shown that they were able to contain the attacking threat of Bishops and also when they broke it was with the sole purpose of getting a shot at goal.

The visitors continued with their passing game and RCA were happy to confine them to long range efforts up until half time.

During the half time interval there was a little concern over the well being of Ross Preston but a strong cup of tea and a chocolate bar seemed to do the trick and he emerged for the second half.

RCA were quickly on the attack in at the start of the half, a free kick from Davis was swung into the box where Wilczynski got a hand to the ball and although it fell agonising close to the goal Francis was able to hook it clear. The ball was picked up by Richardson on the right and he crossed into the box for Swansbury, but he could only direct his header inches over the bar.

As the half settled it was the visitors who again started to get on top with their range of passes causing problems for the RCA midfield. In the 50th minute Hoganson broke down the right before cutting inside and unleashing a shot which flew high and wide.

Five minutes later and Bishops were on the attack again. Bennett down the right cut across two defenders before picking out Winn, but he shot wide of the target.

The pressure exerted by Bishops was starting to tell and it was no real surprise when just past the hour mark Elliott pulled a goal back when he burst into the penalty area before driving a low shot across Guthrie and into the net.

RCA counter attacked to great effect in the 65th minute when Larkin broke on the right before playing the ball to McBryde, he played a lovely pass inside to Hassan who completely missed the ball, any sort of connection would almost certainly have resulted in goal.

Inside the final quarter of an hour Bishops had a great chance to equalise. A quick breakaway on the left saw Hoganson play the ball forward toward Fairley who slipped the ball past Guthrie but, with an open goal begging he fired into the side netting.

Back came RCA in an attempt to kill the game off and a long ball forward was headed on by Hassan to Butler who fired in a shot which was easily saved by Wilczynski.

In a final push for an equaliser Bishops pushed everyone forward and succeeded in winning a corner, sending everyone forward including the goalkeeper the ball was swung into the box where Guthrie managed to punch clear and the resulting long range effort from Hoganson flew wide of the target.

This was an excellent result for RCA who have been going through a rough time of it results wise this was their first win in eight attempts. It was a good solid performance throughout. We again did well defensively and although we had players playing in unusual positions they coped admirably.

Next up Dunston UTS on Saturday.