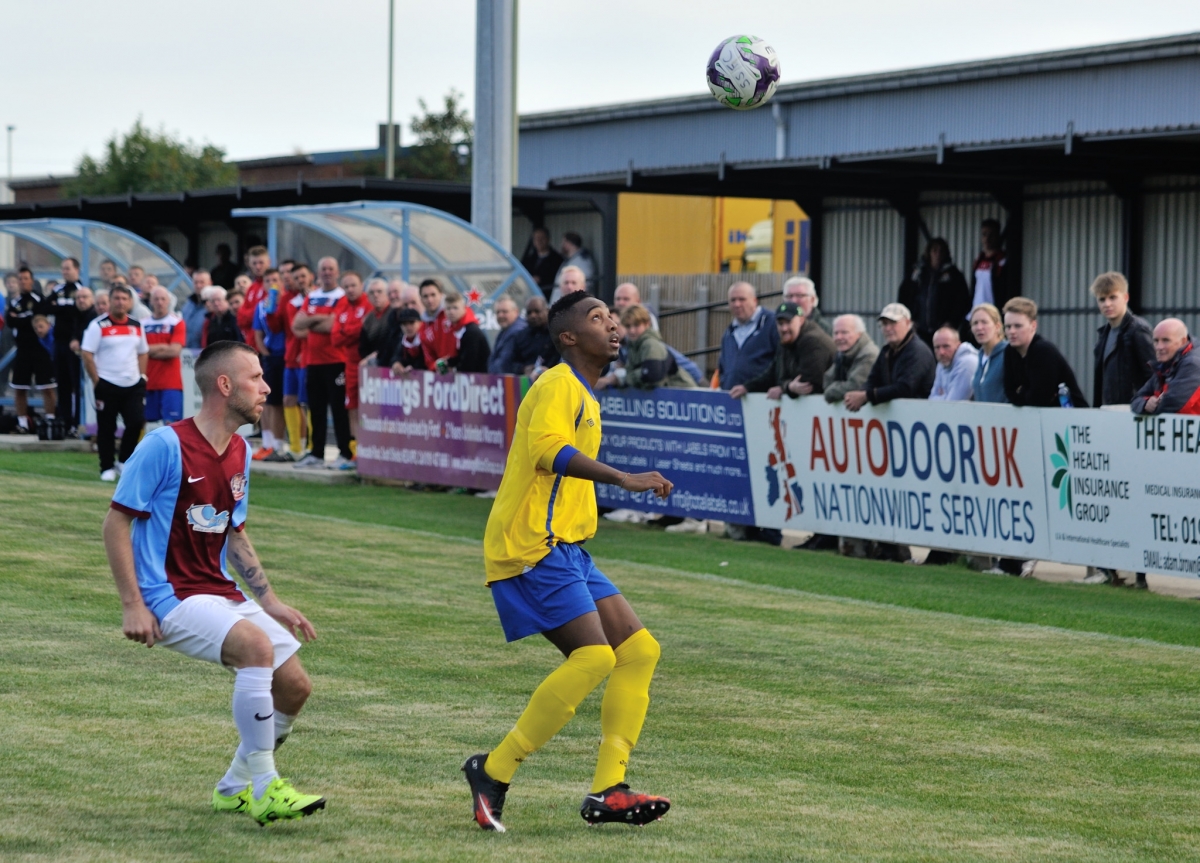 Flavio Pereira Da Veiga during the match against South Shields.

Craig Hodgson and Michael Charlton returned to the side after the mid-week defeat at Shildon. They replaced the injured Kevin Gordon and James Cassidy. The South Shields team saw the return of Julio Arca after a three week lay off through injury.

RCA started brightly and almost took the lead in the third minute when Noble played the ball forward to Butler who controlled it on the edge of the area before slipping it through the Hassan. He produced a powerful low drive which struck Connell on the foot and flew wide of the target.

The Mariner’s responded immediately with a slick move which saw Smith play the ball forward to Briggs who in turn squared the ball to Hannant, but his shot was comfortably saved by Guthrie.

Hassan was causing a few problems for the Shields defence and in the 12th minute Charlton won the ball on the left before passing to the far post where Hassan had time a space to shoot, but Shaw was able to get block on the ball and Scroggins cleared up field.

The momentum was with the visitors as they almost broke the deadlock a minute later when Davis played the ball between two defenders and Butler bustled his way into the area to pick up the ball, but fired wide.

In the 15th minute Charlton again pounced on a misplaced pass before surging forward and firing over the bar, unfortunately in doing so the RCA winger injured himself and was replaced by Pereira Da Veiga.

Jonathan Davis was the next to get a shot on target when Pereira Da Veiga was fouled on the edge of the box. He fired in a curling shot which Connell did well to collect at the foot of the post.

Pereira Da Veiga took over where Charlton had left off. His runs on the left were causing problems and when he skipped past two challenges to set up the ball for Butler it looked likely the striker would score, but he fired wide.

RCA’s passing game was excellent and South Shields were struggling to get a hold of the ball.

The Mariners were under pressure at this point but must have taken heart from the fact that they were still level at this time and in Scroggins they had someone who was willing to urge his team forward, leading by example he produced a stunning half volley which was well saved by Guthrie.

This seemed to lift the home side and they pushed forward, a corner was half cleared by Preston and fell to Briggs on the edge of the area and he thundered a shot wide.

The visitors were getting pushed deeper into their own half as the hosts tried to up the pace of the game, they almost took the lead in the 25 minute when Briggs broke down the right before crossing into the box where Finnigan at full stretch managed to get a toe to the ball but could only watch as it struck the post and out for a goal kick.

South Shields were having a good ten minute period in the game and both Finnigan and Hannant had good chances to take the lead but squandered the opportunities.

Having weathered the storm RCA hit back and in some style. A through ball from Davis was met by Pereira Da Veiga and he won a corner, Davis took the corner to the near post where Swansbury was able to direct a brilliant header past the outstretched hand of Connell and into the opposite corner of the net.

It was RCA’s turn to apply the pressure and they almost doubled their lead in the closing minutes of the half when Pereira Da Veiga broke past his marker, but could only fire a shot over the bar.

The half time team talk must have worked for South Shields as they came out for the second half on the front foot and almost equalized in the 48th minute when a corner on the right was taken by Briggs to Finnigan, his shot was heading towards goal when Cogdon stretched to hook the ball but only managed to divert it wide of the target.

South Shields made a double substitution in the 53rd minute, bringing on Arca and Baxter, and what a substitution it proved to be.

Within a minute of entering the field of play Baxter made a surging run down the right wing, played a one two with Arca, before shooting into the arms of Guthrie from 25 yards out.

A through ball from Arca on the hour mark was picked up by Finnigan, but his shot was saved by Guthrie.

A minute later and Shaw played the ball forward for Arca who dribbled through the centre of the RCA defence before stabbing the ball toward goal, but Guthrie was again able to make the save.

Arca was running the show now and RCA were finding it difficult to cope with the accuracy of the Mariners passing game. A long ball forward by Morse was picked up by Cogdon who set off on a darting run before crossing into the box where Briggs could only manage to head wide.

Baxter was causing all sorts of problems on the right and he was linking up well with Arca and Cogdon. In the 63rd minute a great move involving all three saw Baxter fire in a terrific shot which was equally well saved by Guthrie. The resulting corner saw Shaw head an Arca corner onto the roof of the net.

RCA were reduced to sending long hopeful balls forward in the hope that Hassan or Butler would be able to get on the end of them.

In the 69th minute one of these long clearances was pounced on by Butler and he slipped past the last defender who unceremoniously dragged him to the ground. The referee had no option but to dismiss Morse. McNab stepped up to take the freekick and drilled it into the bottom corner of the net.

With 20 minutes left to play RCA had a 2-0 lead and although it was against the run of play in the second half they were well worth the lead on overall play.

The response from the home team was immediate as they managed to score within one minute of the restart. Cogdon latched onto a through ball from Briggs and somehow managed to squeeze the ball into the net under pressure from two RCA defenders. Just what RCA didn’t want, having silenced the crowd with 60 minutes of effort the visitors had left the door open for a revival and the home crowd’s response was massive.

RCA started to defend deeper and deeper which gave South Shields the impetus and they pressed on even with only 10 men.

Baxter almost equalised when he was played in by Arca, but Swansbury was able to get across and make a great block to deny him. Guthrie was called into action again when Cogdon burst into the box but the young keeper was able to narrow the angle before turning the ball away for a corner. From the corner the ball was played to Hannant whose cross was blocked by McNab and flew up onto the cross bar and away for a corner.

It was almost one way traffic as the 10 men of Shields ripped into the heart of RCA and the pressure eventually told when they were awarded a corner, Briggs swung the ball over and the ball fell to Hassan, unfortunately his clearance fell to Arca on the edge of the penalty area, he took one touch to control the ball before curling a delightful shot out of reach of the despairing dive of Guthrie and into the top corner of the net.

Shields continued to push forward looking for the winner, but RCA managed to hold them at bay and breathed a sigh of relief when the final whistle went at the end of an enthralling match.

This was very much a game of two halves. RCA played well in the first half and more than matched their opponents for 60 minutes while South Shields played outstandingly for 30 minutes, 20 of them with 10 men.

The double substitution made by the Shields management team was what changed this game in their favour. Arca’s passing and influence on the game was mesmerizing at times, almost every pass was played along the ground until he fired in the equalizer.

However, we have to take heart from this match, defensively we did very well under extreme pressure. Our central midfield coped admirably while our strikers probably created more shots on target in the first half than in the previous four matches.