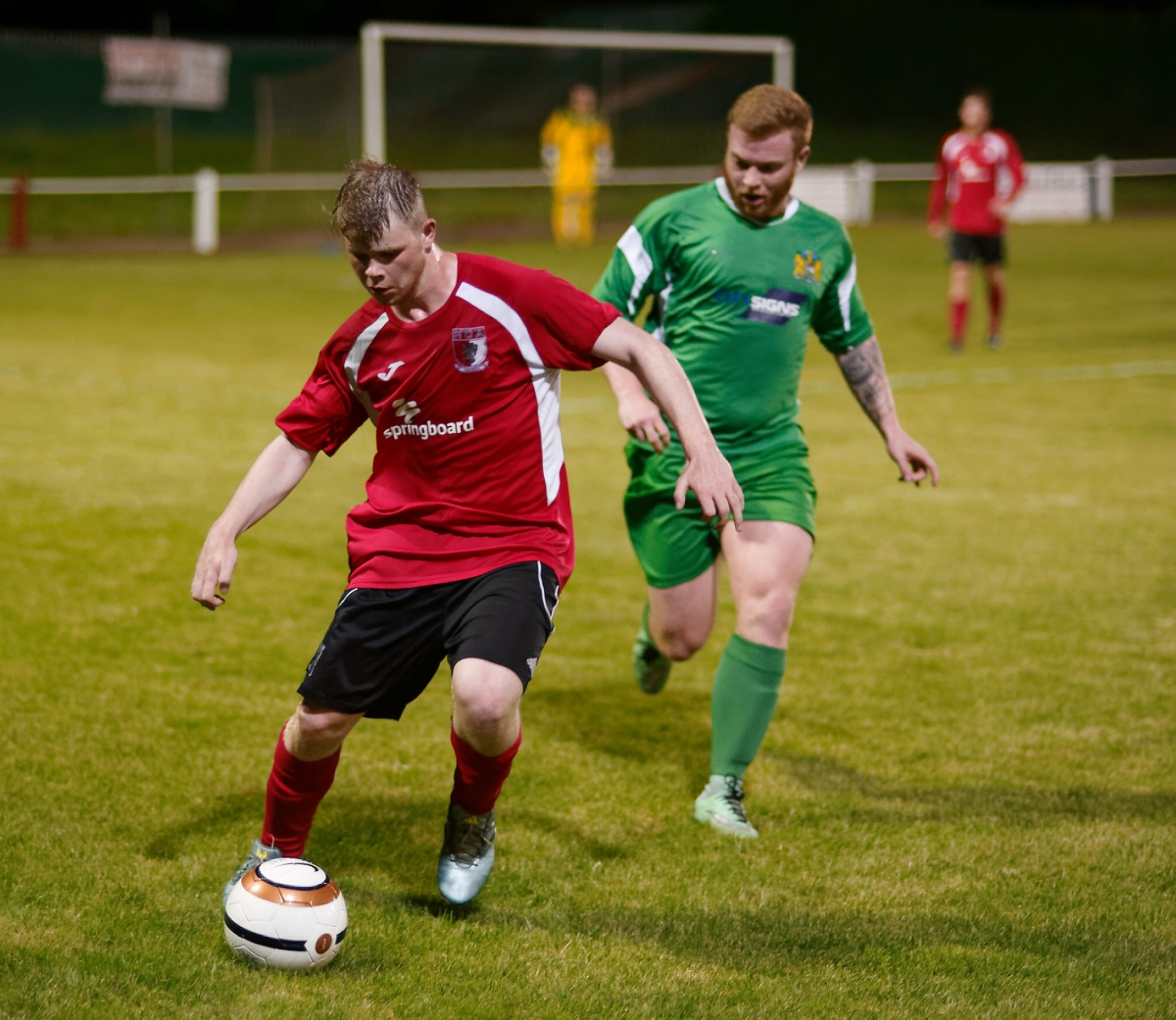 RCA took advantage of the slope in the first half, but it was the visitors who created the first chance of the game when in the second minute McCarthy broke quickly down the left before slipping the ball inside to Brayson, but the Benfield striker placed his shot well over the bar.

The game settled quickly with with both teams looking to attack at every opportunity,but it became a scrappy affair with too many misplaced passes and very little in the way of goalmouth action.

The only chances during the opening 15 minutes fell to Hassan who hooked over the bar after a great diagonal ball from Noble caught the Benfield defence out and then a cross from Cassidy was headed on by McBryde to Wightman, who also shot over the bar when in a promising position.

In the 20th minute the home side took the lead when a cross field ball found Wightman at the far post;  he delivered a beautiful cross to the far post where Armstrong side footed into the goal despite Grainger getting a hand to it and clawing it out; just to make sure Hassan followed up and volleyed into the roof of the net.

Wightman was seeing a lot of the ball and almost doubled the RCA's lead two minutes later, but elected for power instead of placement and drove the ball inches over the bar with Grainger beaten.

On the half hour Wightman picked up a loose ball on the half way line and burst forward before sending in a thunderbolt of a shot which again flew inches over the crossbar.

Benfield were level a few minutes later as McCarthy and McEvoy combined on the edge of the box to open up the RCA defence and McEvoy fired home under the body of the advancing Bussey.

The visitors were taking a hold of the game and a minute later McCarthy set up Scott, but Bussey was equal to the shot saving with his legs and the ball was eventually cleared by Hodgson.

As the game headed toward half time the RCA defence became very jittery as Benfield mounted a number of attacks, Hudson set up McCarthy but his shot was saved by Bussey.

However in the 45th minute Benfield took the lead. Hudson, looking two yards offside, was on hand to smash the ball home. Differing versions of why he was not offside emerged after the game. The Assistant's version was that he was played on by the Red 4. The Benfield version was a lucky ricochet in the area is another augument. Whichever was the right one the goal stood and RCA had yet again conceded in the final minute of a half.

The second period saw Benfield take control of the game, forcing RCA into counter attacking football and long balls which the Benfield defence seemed to soak up with ease.

From the kick off Brayson broke into the box and fired across goal and then within minutes Brayson became the provider as he fed the ball to MotM Hudson who fired over.

RCA's only response came from a free kick on the edge of the box when Butle, on for the injured Armstrong, floated a cross into the penalty area, but Hassan could only head wide.

On the hour mark Grainger decided to go for a route one approach sending a ball forward straight to Hudson who controlled the ball with one touch and fired over the bar with the next touch.

RCA's next opportunity again fell to Hassan. This time Richardson sent in a cross which was met by the RCA striker, but again his header went wide.

Benfield went straight down the other end after this scare and should really have clinched victory when Brayson was through one-on-one with the keeper and instead of drilling it low he elected to lob Bussey. The ball struck the bar and rebounded to the RCA keeper.

In the 80th minute J Davis made a darting run past two defenders before releasing the ball to Cassidy, he played the ball forward to Hassn who turned and fired in a shot which Grainger saved diving to his left.

In the final minute of the half RCA pushed men forward in an effort to get something from the game, but were caught twice by quick breakaways, in the first Scott burst into space before firing across the body of Bussy and wide.

From the goal kick RCA mounted another attack, Cassidy and J Davis combining to get into the Benfield penalty area, but the final ball into the box was intercepted and cleared up field where Scott latched onto it and this time smashed his shot wide of Bussey, but just inside the far post.