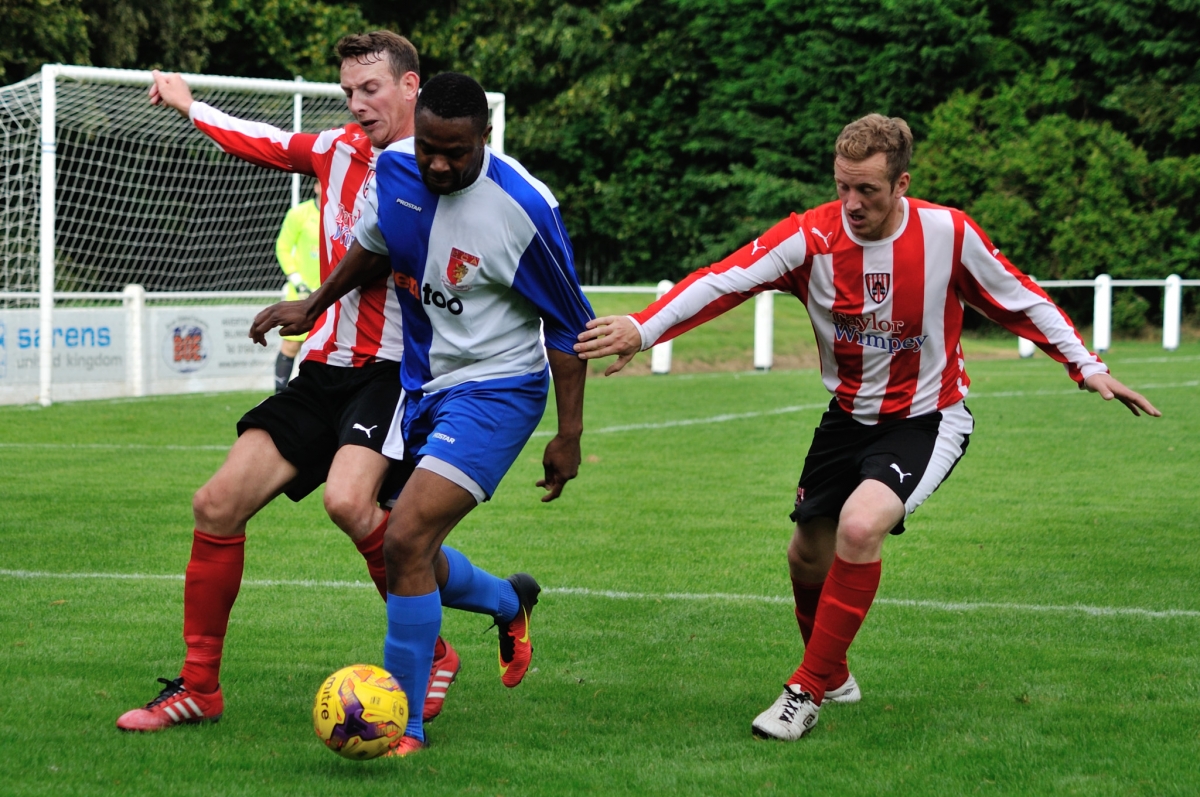 RCA started well and had the first chance of the match when a good ball by Noble inside the full back was picked up by Callen who crossed into the box where Hassan was inches away from connecting and the ball was cleared up field.

In the seventh minute Guisborough's Bligh was booked for a deliberate trip and was lucky the referee didn't see the second kick at the player on the ground.

In the eighth minute Galloway fouled McBryde on the edge of the box, J Davis took the kick but fired over the bar and a minute later C Davis picked up the ball on the right played it to Gordon who switched play to to the left where Noble, in acres of space drove forward before sending in a terrific shot which stung the hands of Escritt in the Guisborough goal.

RCA were dominating possession without any real penetration but in the 12th minute Swansbury intercepted a forward pass and played in Callen who laid the ball off to Noble and his cross was met at the far post by Callen but he was not able to get his header on target.

As the game settled down RCA won a corner which was cleared up field by Escritt, the ball fell to Smith who wrestled his way past an RCA defender but was fouled on the edge of the box by Bussey who was immediately dismissed and a freekick awarded outside the penalty area. RCA took off Gordon to allow substitute keeper Harkess to replace Bussey in goal. The free kick was well saved by Harkess.

The visitors re-organised, but kept on pushing forward and were unlucky not the take the lead on the half hour mark when a ball in by Noble found McBryde who cross was punched away by Escritt, it fell to Hassan who stabbed the ball inches wide of the upright.

As the game started to open up the Priorymen had their first real attemp at gaol when Roddam played the ball forward from defnec and Helm slipped into the penalty area before firing in a shot which flew past the post.

The 10 men of RCA deservedly took the lead in the 34 minute when Noble played a great ball into the box for McBryde who shrugged off two challenges before placing the ball beyond the reach of Escritt and into the net.

It should have been 2 - 0 within five minutes when RCA were awarded a freekick on the edge of the box after Carling upended C Davis. J Davis took the kick and Hassan was first to get to the low cross his shot, from two yards out, was somehow blocked by Carling and flew over the bar. The resulting corner was met by Hassn who forced a good save from Escritt.

The game was heading towards half time when RCA were awarded another freekick after Cassidy was fouled, J Davis picked out Callen with a lovely flighted ball but RCA's leading goalscorer headed over the bar.

The visitors were left to rue the missed chances when in the 45th minute the home team were awarded a corner it was swung into the box and McPhillips, unmarked inside the penalty area headed home to make the half time score 1 - 1.

Guisborough looked to up the tempo at the start of the second half and were utilising Bligh and McPhillips to supply crosses in to Helm but the RCA defence was coping very well with the threat and Harkess was only forced to make one save in the opening 10 minutes of the half.

RCA restored their lead in the 59th minute when Noble picked the ball up in his own half, saw the run of C Davis on the right and sent a long ball forward, Hassan managed to flick the ball into the path of C Davis who controlled the ball before drilling in a low shot past Escritt and into the net off the post.

With the lead restored RCA started to press forward again and almost killed off the game in the 76th minute when a ball forward from Hodgson was met by Hassan, but his header was blocked by Galloway, the ball fell to C Davis who crossed into the box but the ball was again blocked this time by Carling, the loose ball was picked up by Hassan who with his back to goal spun and shot but it flew over the bar.

The game was starting to get physical as it entered the final 10 minutes and a players from both sides were booked for niggly fouls although in the last few minutes a late tackle by Bligh, already cautioned, went unpunished.

As the game entered the final minute Guisborough were awarded a free kick on the left, the ball was swung in by Roddam and in a carbon copy of his earlier goal, McPhillips found space to head home leaving the RCA players absolutely distraught.

Conceding late goals is become a trademark of RCA's season. We seem to switch off completely just before half time and full time, this needs to be addressed. It is difficult to take when we out played Guisbourgh for the whole game, they had three shots on target and scored twice.

There was no lack of effort from every player today and they really deserved much more than a draw in this match.