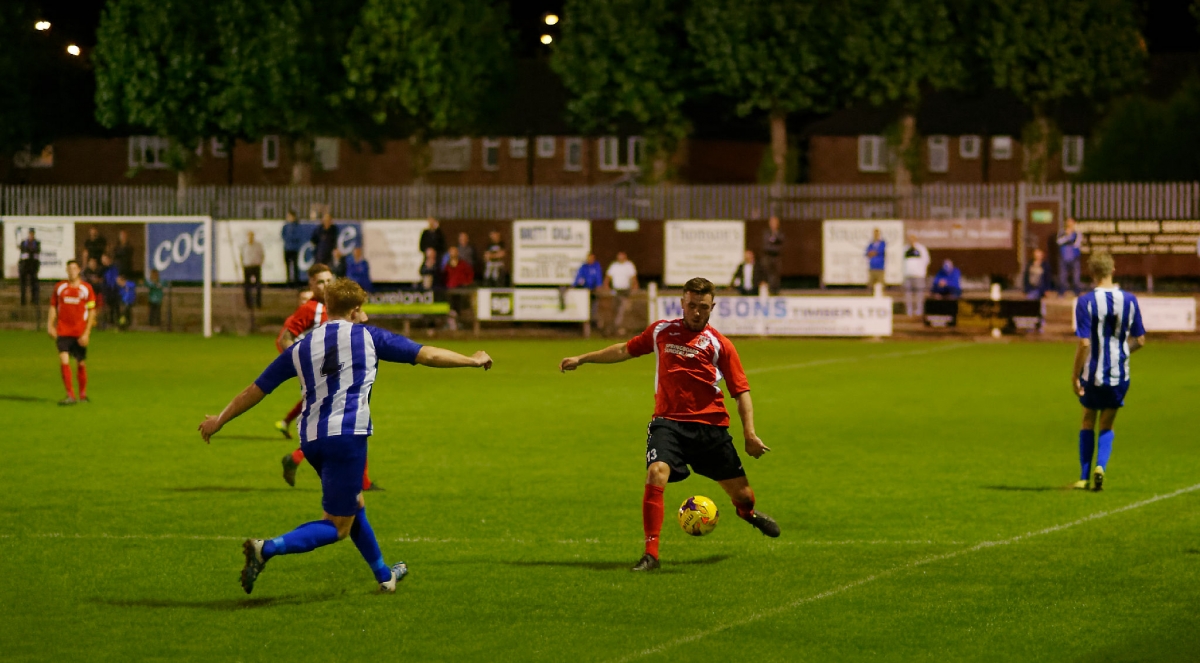 The game started with RCA on the attack, a superb through ball from Noble found Callen on the left and the RCA leading goalscorer cut inside his marker before outpacing a second defender and forcing a brilliant one handed save from Flynn low down to his left.

The injury curse which has blighted the RCA season so far struck again when captain Larkin had to be replaced after only four minutes.

A quick re-shuffle of the team as Stewart came on and slotted into the left back slot.

Callen was in the thick of the next RCA attack when he received the ball from Gordon before playing in McBryde but his effort was blocked by Eleftheriadis.

Two minutes later and RCA were awarded a free kick on the edge of the box when Davis was fouled, Davis picked himself up and fired in a curling shot which Flynn managed to palm clear.

As the pressure mounted RCA had a penalty appeal waived away despite the fact that a Whitley Bay defender had hold of Hassan inside the area and remained holding onto the RCA player as the ball was played towards the other end of the pitch.

Whitley drew level in the 20th minute when a quickly taken free kick  was played to Fowler who fired in a long range effort which Kempster, on the edge of the box, got his head to a ball and deflected it past Bussey into the the net.

The visitors restored their lead in the 23rd minute when Lay cleared the ball up field and Hassan outpaced his marker before squaring the ball to Davis on the edge of the box and Davis smashed the ball into the net.

The home team started to get their passing game together and in the 30th minute a quality crossfield ball from Haley found Fryatt in acres of space on the right wing, the ex-RCA player sent a curling dipping shot inches wide off the far post with Bussey rooted to the spot.

With the game drifting toward half time the game got bogged down in a midfield battle with both teams content to cancel each other out.

Whitley Bay started the second half on fire attacking continuously but being met by a stubborn RCA defence ably commanded by Swansbury and assisted by Lay and Gordon who were not giving anything away.

In the 55th minute a surging run by Haley saw him slip through two tackles before squaring the ball to Shanks who fired high over the bar.

The introduction of Andy Robertson on the hour added a greater physical presence to the Bay attack but still the visitors held firm.

As the pressure mounted on the RCA defence Patton picked up a loose ball 30 yards out and played in Shanks but again the Bay player was rushed into his shot a the ball flew wide of the target.

The visitors were frustrating their opponents with their delaying tactics and they had a great opportunity to increase their lead when, against the run of play, Graham received the ball wide on the right before playing the ball forward to Davis who turned his marker before clipping in a great ball to the far post where McBryde rose but could only direct his header into the side netting.

From the goal kick the ball was picked up by Richardson who played the ball forward, what looked like a high foot cleared the ball and while the RCA player protested, the ball was swung forward to Shanks who controlled the ball before being tackled by Stewart, the referee awarded a penalty and dismissed Stewart for a second yellow card. Bussey, who was also cautioned for protesting about the decision, was beaten by the powerfully taken spot kick of Patton.

With time running out the home team must have thought that the final chance had gone when in the 89th minute Shanks was left one on one with Bussey and chipped the ball over the advancing  keeper only to see his effort cleared off the line by Gordon.

However as the game entered injury time the ball was hoisted into the RCA penalty area and in the goalmouth scramble that ensued, substitute Wilkinson seized on a ball inside the six yard area and squeezed in a shot between the keeper and the post giving the home team the victory.

RCA where a Jekyll and Hyde team in this game, brilliant at times in the first half and almost unrecognisable as the same team in the second.

Give credit to Whitley Bay they stuck at it and got a lucky break with the penalty decision and in the end their second half performance was deserving of the win. However we still created the better chances over the ninety minutes but once again injuries have robbed us of key players at cricial times in the match.

We also have to try to keep 11 players on the pitch, lazy tackles are usually down to fitness and this season there is a bigger emphasis on not who wins the tackle but whether there is any follow up contact. (Automatic Yellow)