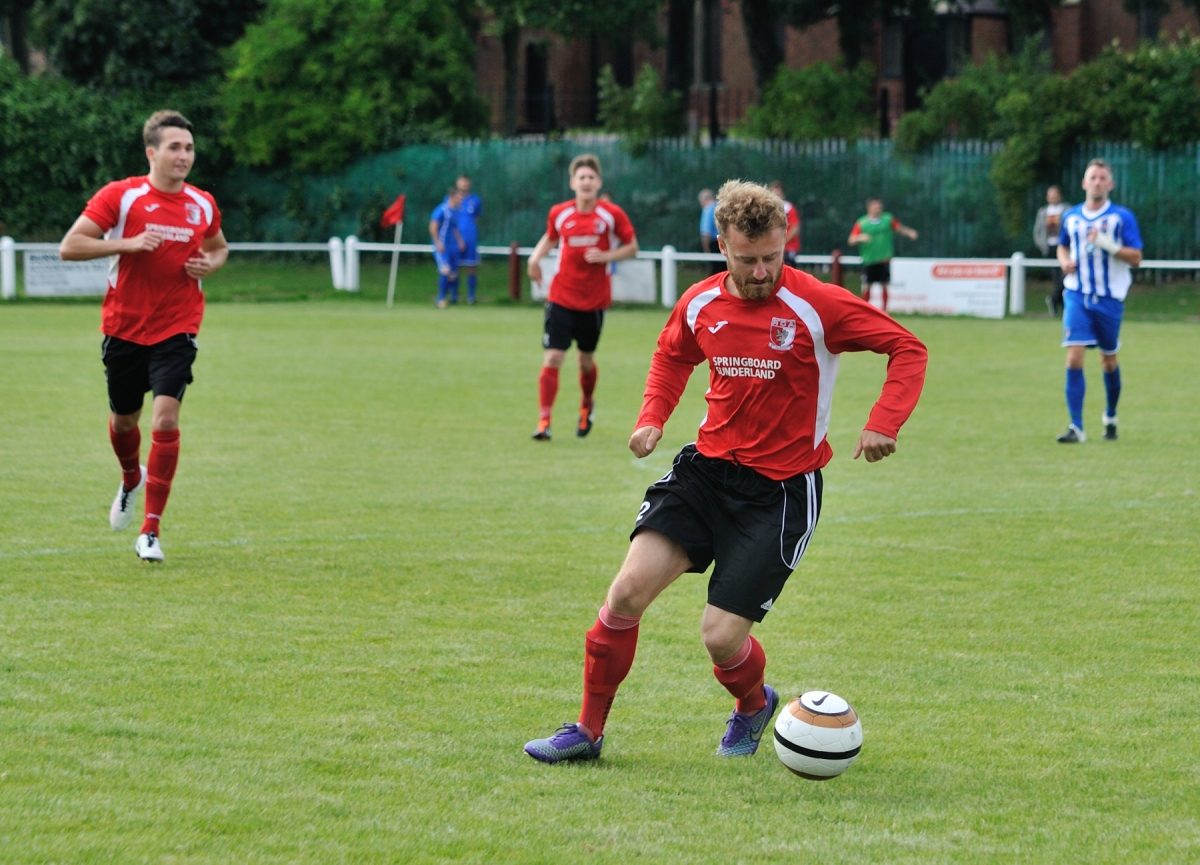 RCA started really well defending the Beechbrook end of the ground and in the opening minutes Callen almost opened the scoring when he volleyed a first time effort over tha bar from a Larkin cross. Two minutes later Callen turned provider when J Davis played the ball to him, he clipped a cross to the far post where Charlton couldn't quite connect but managed to salvage the ball before sending in a cross which Provett collected with some ease.

The momentum of the game continued in RCA's favour and a neat passage of play saw the ball switched from Larkin on the right to Cassidy on the left, he cut inside his marker before squaring the ball to Hassan, he in turn laid the ball off for Gordon but the full back shot high over the bar.

A break in the twelth minute saw Hassan play the ball quickly to Cassidy but his cross was headed away by Johnson under pressure by Callen.

With the opening 15 minutes of the game gone Morpeth started to get into their stride and a shot from the edge of the box by Chilton was blocked McNab, the ball fell to Graydon who played the ball wide to Carr, but his cross was cut out by Swansbury and the danger was cleared.

In the 20th minute of the game Harkess was forced to make his first save of the game when Forster won the ball on the right and played the ball to Carr whose shot was partially blocked by Mcnab and the ball flew through the the RCA keeper.

RCA had a great chance to open the scoring in the 24th minute when a J Davis freekick was headed down by Hassan and Callen was first to react firing in a volley which was destined for the net until Provett somehow managed to get a hand on it to tip over the bar for a corner, from J Davis' corner the ball was again headed down this time by Swansbury, the ball again fell to Callen who tried to pick out the corner of the net but Forster was able to head off the line.

The home team deservedly took the lead just after the half hour. Charlton played a wonderful ball to Larkin on the right and the RCA skipper produced a scintillating turn of foot before crossing into the box where Callen had the simple task of firing home from close range.

It so easily could have been 2 - 0 a few minutes later when Hassan dispossessed Hall before bearing down on goal, however his final shot was well saved by Provett.

Provett was called into action again in the 38th minute when McNab played a defence splitting pass to Cassidy whose cross into the box curled wickedly towards goal and the Morpeth keeper did well to palm the ball over the bar. The resulting corner was swung into the box by J Davis, Hassan chested the ball down to Callen but he mishit his shot and Hall cleared up field.

These missed chances seemed to spur the visitors on and the began to grow in confidence and in the 42 minute they got back into the game when  Carr slipped past his marker before sending in a terrific shot which rebounded of the underside of the bar, Robinson following in was the quickest to react smashing the ball into the roof of the net.

From the restart RCA pressed forward and a lovely through ball from Charlton was picked up by Callen who was through one on one with the keeper but once again Provett was the Highwaymen's saviour making another outstanding save.

Morpeth emerged from the dressing room a full five minutes before the home team and from the start of the second half showed their intent. In the opening minutes Carr played a through ball to Chilton who fired in a low shot which went into the side netting.

In the 49th minute the visitors did take the lead. An RCA attack was halted by Sayer who played a long ball over the RCA defence to Carr, the diminutive striker held the ball up before squaring it to Graydon who hit the ball with the outside of his boot into the bottom corner of the net.

RCA did what they normally do in this situation, they attacked in force and it took a herculean effort by Hall to prevent first Callen and then  Charlton with two outstanding blocks and when the ball eventually fell to Larkin Mullen was on hand to head off the line.

In the 67th minute Morpeth were awarded a free kick, Graydon floated the ball onto the foot of Taylor who controlled the ball before driving in a low shot which Harkess saved at the second attempt.

RCA finally got there just rewards in the 70th minute. A free kick into the box by Harkess was met by Hassan, the downward header was flicked on by Larkin to Swansbury who stabbed home from 5 yards out.

It should have been all over two minutes later when Davis played a delightfull ball forward to Callen who broke into the box, instead of shooting he elected to square the ball to Larkin but the ball was intercepted by Hall and the danger passed.

As the game entered the final ten minutes both teams were looking to win the game, a good run by C Davis saw his cross into the box fall to Callen but the RCA striker mishit his shot styraight at Provett.

In the dying moments of the game the visitors had a claim for a penalty when Anderson was impeded on the edge of the penalty area, after consulting with her assistant a freekick was awarded and the resulting kick was well wide of the target.

On another day this could have been a good win for RCA, but credit to Morpeth, they rode their luck in the first half and came back into the game in the second half.

That being said RCA had a number of clear chances to win this game and squaunderd all of them. However there were a lot more possitives than negatives, the team spirit is still there and we are creating chances which is a good thing, somewhere along the line some team are going to suffer.

Next up is the little matter of a Ryhope derby, the first one in the Northern League. Let's get along to Welfare Park and support your team. Kick off is at 11:00am.