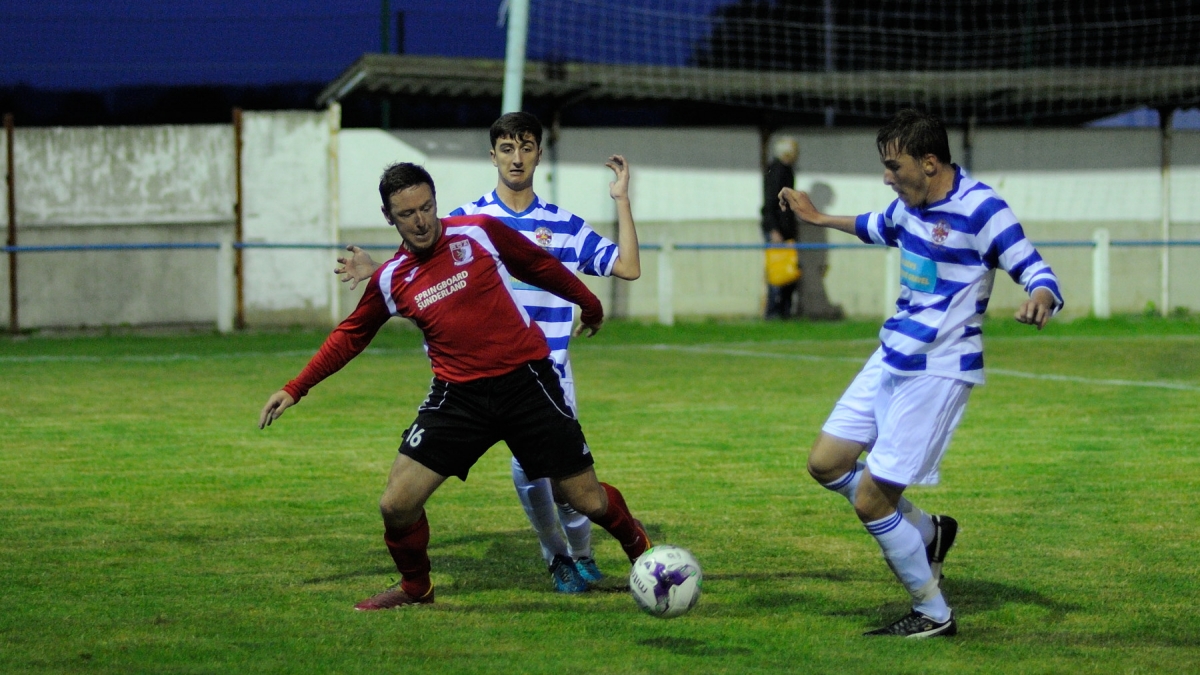 The management team made a bold decision in moving Colin Larkin onto the right wing and playing Michael Charlton in a more central midfield role.

The “Cestrians” took advantage of the slight slope in the first half, but it was the visitors who created the first opening, with the game only a minute old Larkin received the ball from Gordon on the right before picking out McBryde with a low cross which the RCA striker hooked over the bar from 10 yards out.

The home team were not getting to grips with the swift passing movement of the visitors as they found space all over the park. In the sixth minute a good move between Charlton and Davis saw the ball moved forward to Callen who slipped past his marker before chipping the ball into the box where Cassidy was on hand to head past Wilson but the ball struck the post and was cleared.

RCA continued to control affairs and in the 13th minute a “Route one” through ball from a Bussey free kick found Callen unmarked in the “Cestrian” penalty area, but he lofted the ball over the bar.

The home team had the first shot at goal two minutes later when a long clearance from Wilson fell to Mole who was fouled by Swansbury, Marron took the freekick which he curled round the wall, but Bussey was able to collect.

The visitors took the lead in the 21 minute when Davis sent a thorough ball to Callen, he spotted Charlton running into the penalty area and played a reverse ball to him, Wilson, spotting the danger raced out out of his goal but fouled Charlton in an effort to get to the ball and the Referee awarded a penalty. Davis stepped up and made no mistake blasting the ball into the bottom corner.

The “Cestrians” were reduced to sending long balls forward in the hope of a mistake in the RCA defence but they remained resilient and were able to stave off this attacking threat.

On the half hour RCA almost doubled their lead when Callen picked up a ball from McNab before playing in Cassidy on the left his cross was headed wide by McBryde.

From the goal kick the ball was sent out wide to Stephenson who cut inside before sending in a wicked looking cross which just needed a touch by any of three players to score but to the relief of the RCA defence it drifted wide of the far post.

RCA's response to this threat was emphatic. Bussey played the ball to McNab who in turn played the ball to Lay his forward ball was picked up by Charlton who threaded a delightful ball through to Callen and the RCA striker slotted the ball right footed into the corner of the net.

There was an immediate response from the home side as the ball was played forward by Marron from the kickoff to Mole, he turned on the edge of the box and was fouled by Lay, Marron curled the freekick just wide of the upright.

The attacks were coming thick and fast now. Swansbury played the ball to Charlton who switched it out to Larkin, he measured his cross which was met by McBryde, but Wilson pulled off a terrific save at the expense of a corner, a good header from Surrey cleared the danger from the corner but the ball came straight back and under pressure another corner was conceded. This time Davis drove the ball into the box where McBryde flicked a header toward goal but it was blocked on the line, the rebound fell invitingly for Callen who stabbed it home from close range to make it  3 – 0 to RCA.

The second half continued in much the same vein with RCA rampaging down the slope at will and Chester Le Street having to defend in numbers. Callen, who had been a thorn in the side of the “Cestrians” all night almost got his hat trick in the 47 minute when a cross ball from Cassidy fell to him on the edge of the box but his powerfully driven shot hit Surrey on the thigh and was cleared.

It was now one way traffic as the home team found it difficult to get out of their own half, in the 50 minute Callen won the ball 20 yards from goal and squared it to Charlton who sent in a low shot which went wide of the target.

From the restart the ball was won by Gordon who set off on a run down the right, evading a number of challenges, he found himself in the penalty area but his forced shot went into the side netting.

It didn’t take long for RCA to extend their lead, a ball out to Charlton on the right saw the RCA midfielder skip past two challenges before looking up and clipping the ball to Callen who, unmarked, 3 yards out had the simple task of heading into the net for his hat trick.

On the hour mark Callen had a great chance to add to his tally when he met a corner from Davis but his well-directed header was saved by Wilson.

The “Cestrians” started to get frustrated and were guilty of committing a number of niggly fouls. Whether this unsettled RCA or whether they took their foot off the peddle or just got tired is open to debate, but the reality was that they let Chester-Le-Street back into the game in the 70 minute, a long ball found Laws on the right, he burst into the box and crossed from the bye line into the path of Mole who smashed the ball home from 5 yards out.

Two minutes later and Laws again broke forward, this time a well-timed tackle from McNab stopped his progress although the “Cestrians” substitute thought he had been fouled in the process.

This gave the home team a massive boost and it was they who were starting to look the stronger as RCA’s passing game fell apart.

In the 80th minute a long ball forward from Bussey, trying to ease the pressure on his defence, found Callen who controlled the ball brilliantly before unleashing a terrific shot which the keeper was pleased to see go just beyond the post.

Charlton had a the next chance for RCA as he raced onto a through ball before firing wide.

The final 5 minutes of the game saw RCA trying to run down the clock while the “Cestrians” looked to get possession and launch another attack.

In the end it was the visitors who managed to nullify the threat in the final minutes of the game.

In the first 70 minutes of the game it was the RCA that everyone wants to see turn up week in week out. Callen in this form is unplayable, Charlton was excellent in the centre of midfield and the defenders did their job.

Then they looked like they hit a brick wall, the passing deteriorated, the closing down stopped and the overall performance levels dropped allowing Chester Le Street back into the game.

Three points is three points as they say and it sees us propelled to the dizzy heights of fourth in the League.

Next up is Ashington at Meadow Park the first of three home matches in a row.