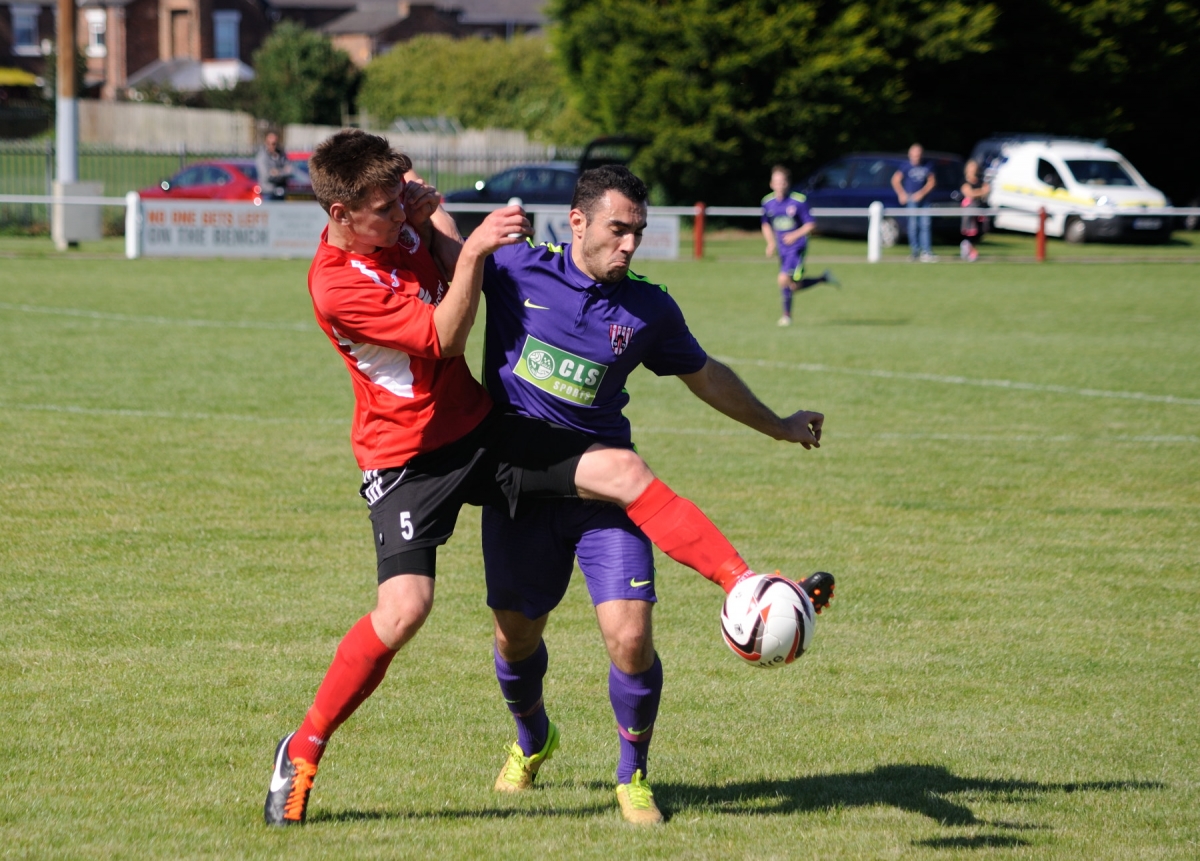 The mid week win against West Auckland had boosted the confidence of the team and there was an air of expectation in the dressing room before the match.

Historically matches between these two teams have produced high scoring games, RCA have won 7 of the eighteen games played with Guisborough winning 5 and 6 being drawn, in those 18 games a total of 72 goals have been scored which is an average of 4 goals per game.

After a slight shower just before kick off the players took to the field in brilliant sunshine.

RCA took advantage of the slope in the first half but it was the priorymen who produced the first meaningful attack when Roddam played in Charmey but his effort flew straight into the arms of Bussey.

The home supporters didn't have to wait long for their teams first foray into the oppositions penalty area,  a long crossfield ball from Lay was flicked into the path of Larkin who pulled the ball across his marker before curling his shot wide of the far upright.

Within two minutes RCA were back on the attack with a well weghted ball from J Davis finding Cassidy on the left wing, he took the ball forward before driving the ball wide of the near post.

From the goal kick Thackeray sent the ball to Bligh who turned the ball on to Pennal but Hodgson was able to get across and make the tackle to concede a corner, the corner was swung into the box where McPhillips glanced a header just wide of the target.

Guisborough opened the scoring in the 18th minute with a stunning move down the right, Roddam outpaced two defenders before crossing from the byeline into the box where Pennel was on hand to set up Charmey who made no mistake from close range.

RCA hit back within 90 seconds when a great run down the left by Cassidy saw him evade two tackles before spotting McBryde at the far post, he clipped a delicate ball to the RCA striker who headed home from 3 yards out.

The goal sparked the home team into life and they started to put Guisborough under extreme pressure, it was therefore no surprise when 5 minutes later they took the lead. Charlton won the ball on the right before slipping it to J Davis, his measured cross was missed by the whole of the Guisborough back 4 and the keeper and fell onto the chest of Cassidy who helped the ball over the line.

It has to be said that both teams were playing some very good football with Bligh and Wood trying to outdo J Davis and Noble in the centre of the park.

In the 35th minute the visitors levelled the scores with a supurbly taken freekick, Bulmer from 20 yards out curling the ball over the RCA wall and into the top corner of the net.

It could have been worse for RCA 5 minutes later when Bulmer dribbled the ball into the penalty area before firing inches wide of the goal.

RCA had the final chance of the half when Charlton found McBryde free on the left of the area, he controlled the ball before squaring it to Davis but his effort went straight into the arms of Thackeray.

The second half opened brightly with McBryde almost getting onto the end of a lovely through ball but McPhillips managed to get a foot to the ball and Ferguson cleared up field.

RCA pressed forward and two minutes later Charlton outpaced two defenders before crossing into the box where once again McPhillips was on hand to head clear.

The home team were looking to control the game and were having their best spell of the match, Cassidy picked up a ball from Hodgson before cutting inside his marker and sending in a low cross which was blocked by Carling.

The priorymen were still dangerous on the break and when Wood played the ball froward to Bligh the diminutive youngster wriggled past two defenders befoer setting up Pennal but his effort went wide.

RCA almost took the lead in the 58 minute when Gordon and Charlton combined to send Davis into space on the right, his cross was met perfectly by McBryde at the far post but his header struck the bar and over for a goal kick.

The visitor continued to pose a threat on the break and when a long hopeful punt forward fell into the path of Bligh it looked likely that he would score but he stabbed the ball wide.

Both teams made substitution with around 20 minutes remaining and it was the visitors substitute Helm who had an almost immediate impact driving in a long range effort which flew wide of the post.

RCA were awarded a freekick on the edge of the box when Gordon was fouled, C Davis took the kick and McBryde flicked it to the back post where Cassidy placed a shot just wide of the goal, however it wouldn't have counted as he was adjudged to be offside

As the game moved into the last 10 minutes Bligh became a constant threat, another long ball forward by Carling was controlled by Bligh who turned and shot but Bussey was equal to the shot.

A minute later at the other end and the ball broke to Pounder who chipped the ball to the back post for Gordon but McPhillips was able to get a head on the ball and the danger was cleared.

There was a big scare for RCA when a poor clearance fell to Bulmer who shrugged off the challenge of Lay before taking a shot which took a wicked deflection before hitting the post and rebounding to safety.

The home team should have learnt from that but in the final minute of normal time McNab sent in a terrific crossfield ball toward Gordon on the right wing, unfortunately for RCA Ferguson saw the danger and was able to head the ball forward to Bligh who collected the ball before driving forward to the edge of the penalty area and smashing in a terrific shot which gave Bussey no chance as it rocketed into the roof of the net.

In a cruel end to the match RCA were guilty of another mis-placed pass in the third minute of injury time and the ball fell to Clark who calmly rounded the keeper before firing home.

This was a game in which both teams played better up the slope and against the wind.

With 30 seconds of normal time remaining we should have been looking to retain possession and hold out for a point instead we looked to kill the game off, over committed players forward and were caught on the counter attack.

That being said there were some solid performances for all to see, if McBryde's header had gone in then we would have been raving about the contribution of Cassidy on the left, Charlton on the right and Hodgson in the centre of defence. these positives are sometimes lost in defeat.