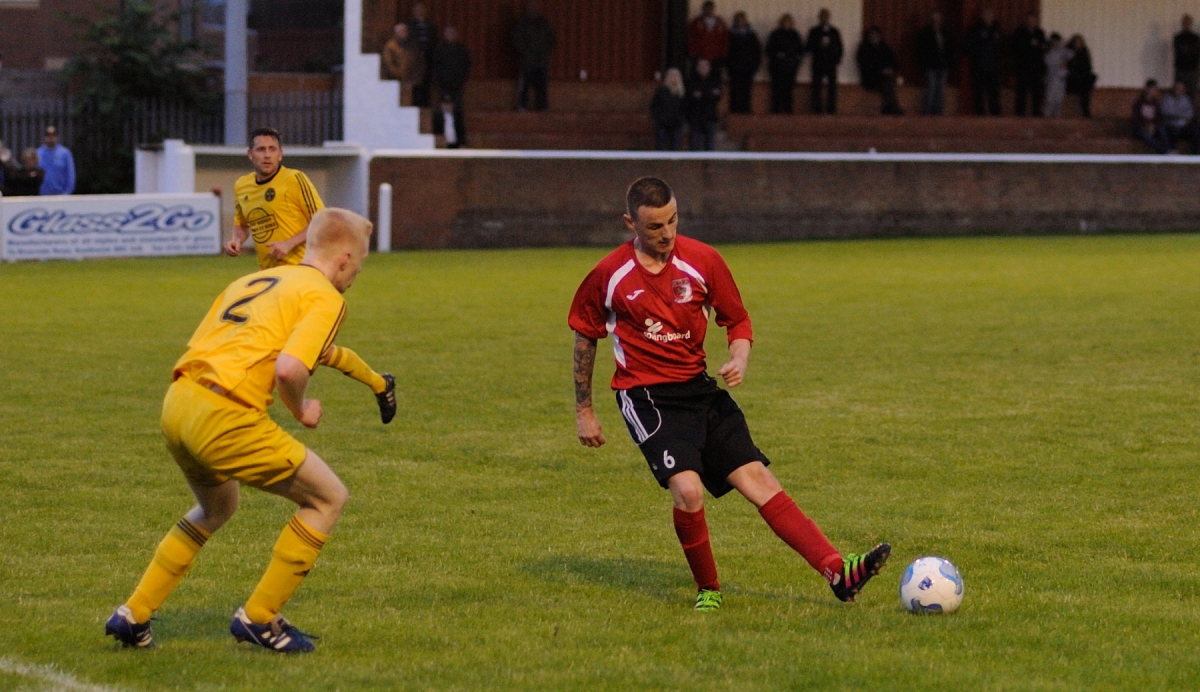 RCA where quickly on the attack kicking up the slope. A long ball forward from J Davis gave Callen a chase, he outpaced the West defence before cutting inside but his shot was pulled wide of the target.

West opened the scoring with their first attack of the game in the sixth minute. Gardner whipped a free-kick into the penalty area, the ball was headed clear but only as far as Rundle who held off two challenges before slipping the ball to D Richardson he slotted the ball home past the outstretched hand of Bussey.

The home team responded with some good football and in the eighth minute and were almost rewarded with an equaliser when Cassidy broke past his marker before cutting the ball back to J Davis on the edge of the box, unfortunately his curling shot went flying over the bar.

Two minutes later and the threatened equaliser materialised when they were awarded a free kick for handball, Noble floated the freekick to the far post where it was headed back across goal, Callen picked up the loose ball close to the bye-line before crossing to McBryde who headed home from no more than a yard out.

A minute later and the home team should have gone in front when McBryde and Davis combined to find Callen in space he slipped past the West defence but his effort was off target.

West picked up the pace kicking down the slope and when S Richardson burst into the area and sent in a low shot, McNab was forced to concede a corner sliding in to block the shot.

The resulting corner saw Bussey palm away and Cassidy cleared the ball up field. There followed a period of play which saw both teams trying to get a grip of the game and it became a bit scrappy. In the 20 minute M Hudson sent a through ball to Gardner who picked up the ball before smashing in a long range effort which Bussey managed to get a fingertip to and the ball went out for a corner.

Straight from the corner RCA went on the attack, Cassidy picked up the loose ball before passing to Noble who found Davis, his ball into the box was held up by Callen who turned and shot, Nelson blocked the shot, the ball fell to Charlton who smashed in a close range effort but Marron was able to get his body in the way and the danger was cleared.

With half an hour gone the visitors started to get a foothold into the game, a Nelson cross into the box was headed goalward by S Hudson but Bussey was able to save fairly comfortably.

However, four minutes later West regained the lead when a long clearance by Marron was flicked on by Burnicle into the path of M Hudson whose first touch saw the ball loop over the head of Bussey and into the net.

It could have been even worse in the 38th minute when Rundle swung in a corner which fell to Burnicle at the far post his first time volley was blocked by Gordon and the rebound shot by Brackstone was also blocked this time by McNab.

West continued to press forward to try and kill the game before half time but shots from S Richardson and Rundle didn’t trouble Bussey in the RCA goal.

In a final flurry before half time Cassidy won a freekick on the edge of the box when he was fouled by Gardner and although the freekick came to nothing the ball was never really cleared and RCA were awarded another when Charlton was fouled.

RCA with the advantage of the slope in the second half took full advantage and in the 48 minute they were back on terms, Charlton received the ball from Stewart and squared the ball to Callen 25 yards out, the RCA striker took the ball forward a few paces before unleashing a tremendous shot which flew into the top corner of the net.

The home side almost took the lead a few minutes later when Cassidy, who had swapped wings with Charlton, picked up a Bussey clearance on the right wing, out stripped the West defence before cutting inside and firing in a low shot which Shaw turned superbly away for a corner.

RCA had the bit between their teeth and it took a magnificent block by Marron to deny Charlton. West, against the run of play almost took the lead when Burnicle tried his luck from distance and almost caught Bussey out, however the RCA keeper managed to turn the shot behind for a corner.

A run by Cassidy was stopped by Richardson and the West full back was then fouled by Cassidy, from the freekick the ball was played forward to M Hudson who laid it into the path of Gardner whose long range effort looked destined for the top corner but Bussey managed to tip over the bar.

With the game moving into the last 20 minutes RCA were reduced to ten men when Stewart was booked twice within the space of three minutes.

West looked to make their man advantage count and they won a corner as RCA tried to regroup and there was panic stations in the penalty area from the resulting corner as a header from Brackstone was blocked by Lay, Gordon miskicked his clearance and then a shot from S Richardson was blocked before the ball was finally cleared to Charlton.

At the other end a minute later and Noble had a speculative effort easily saved by Shaw.

Both teams then made substitution, RCA to try and shore up their defence while West looked to capitalise on their man advantage.

It looked like it was going to be a long last 15 minutes for the home team who looked content to clear the ball up field to McBryde to try an hold the ball up, and in the 76 minute A ball forward was controlled by J Davis inside the penalty area where he was bundled to the ground and a penalty was awarded. J Davis picked himself up and took responsibility for the kick and although Shaw got a hand to the ball he couldn’t stop it from entering the net giving RCA the lead.

RCA, although down to 10 men continued to press forward, good football by J Davis and Noble found Cassidy on the left and he pull the ball back toward McBryde but Shaw just got there first.

Cassidy was finding a lot of space late in the game and aminute later he found himself in a good wide position, unfortunately this time his cross was collected by Shaw.

Both teams continued to attack which made an excellent spectacle for the spectators but heart attack time for the management.

RCA continued with route one football which almost got McBryde away in the 85 minute but Shaw came out quickly and cleared.

As the game entered the final few minutes West were awarded a free-kick the ball was floated to the back post where McNab, under pressure, managed to head behind for a corner.

RCA substitute Wightman made an immediate impact winning a corner with his first touch, he then had a good chance to put the game to bed but Maddison was able to get back a stifle the danger.

The minutes added on at the end of the match produced little in the way of goalmouth action and RCA ran out winners 3 – 2.

This was an entertaining match full of end to end action, it had goals, bookings and a dismissal.

RCA must build on this, although it is early days there seems to be a team spirit building which bodes well for the season, but we have to stop picking up silly bookings. In the last eight games of last season we didn't have a booking and we didn't pick up one in pre-season. Next fact is that the only players booked in the first two games are new signings.

However back to reality, this was the first league match of the season and there is still another 41 to go. The two teams on display in this match might be the best two teams in the league nobody knows.