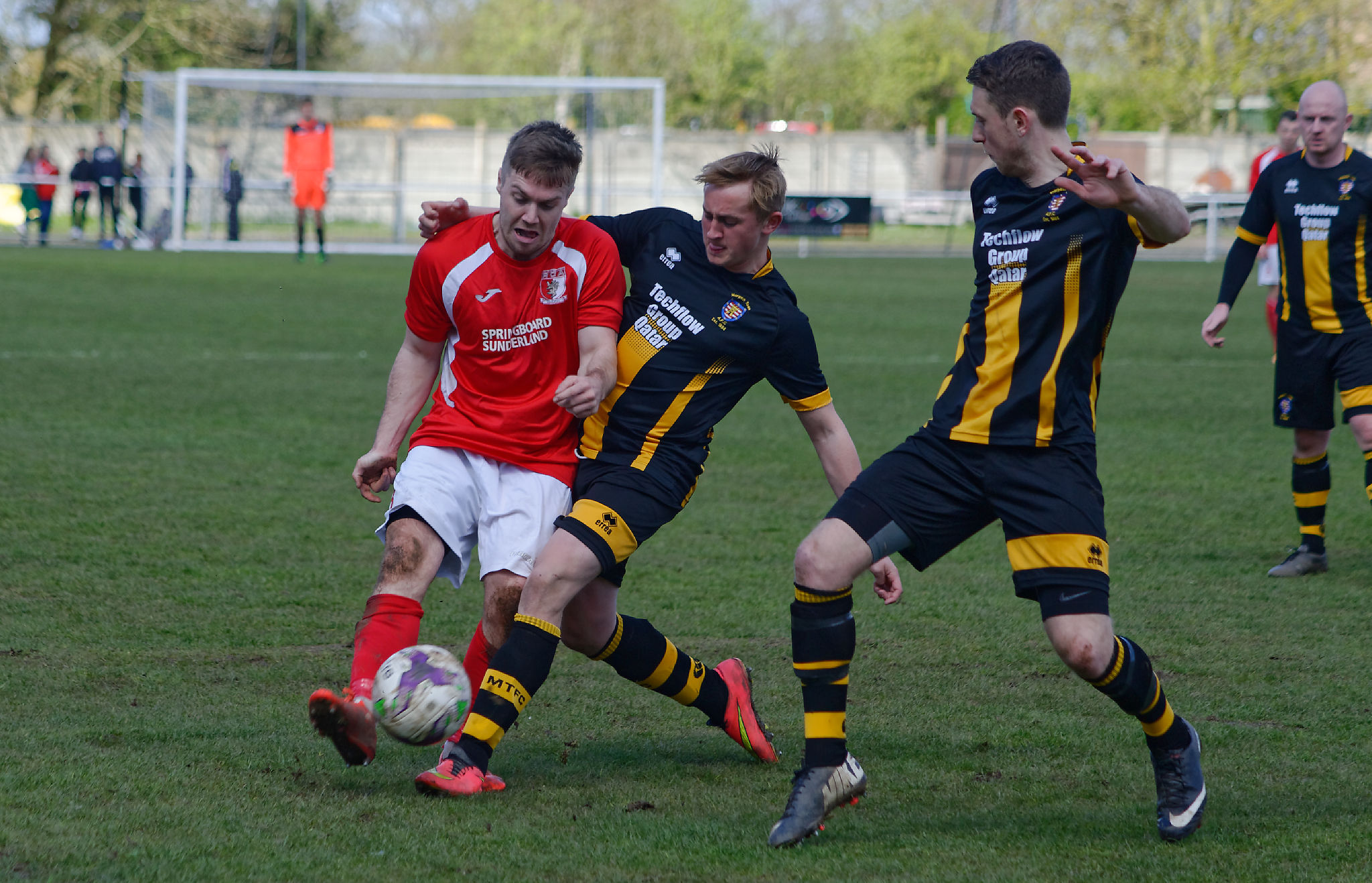 Michael Charlton comes in for the usual attention.

Sunderland RCA travelled up to Morpeth for their second encounter with Morpeth Town in five days. Although it was overcast and there had been some heavy showers in the morning the pitch looked in remarkably good condition.

Both teams made five changes to their respective teams with RCA bringing in Woud, Armstrong, McNab, Proctor and Butler.

Morpeth, as expected, went straight on the attack trying to avenge the 2 - 0 defeat five days ago at Meadow Park. However the long ball tactic employed was easily dealt with by Larkin and McNab. This left McCulloch well protected.

Butler was looking to get his foot on the ball in the centre of midfield and a good sweeping ball out to Graham saw the youngster take on Reid before crossing into the box but Jewells was able to head away with Gordon closing in at the back post. The home team responded almost immediately with a good move which saw Taylor break forward on the left before cutting inside his marker and firing in a shot which flew over the bar.

In the 12th minute an injury to RCA’s captain Reece Noble saw him hobble from the pitch and Jennings replaced him with Gordon switching to right back.

As the game progressed it was obvious that Morpeth were in no mood to concede anything to the RCA attack and a number of meaty challenges ensued. This was a game where chances were few and far between, what little goalmouth action there was seemed to be dealt with by the defenders of both teams and neither goalkeeper seemed unduly troubled.

Morpeth resorted to a tried a tested formula against RCA, a long ball from the right back forward to the left winger, in the past this ploy has caught the RCA defence out, but today Gordon was able to utilise his speed to cover any danger and if the winger was successful in getting past him Larkin was on hand to clear up.

The nearest the visitors came to scoring was from a free kick taken by Butler which flew well over the crossbar and the nearest Morpeth came was also from a free kick when Graydon fired in a shot which deflected off the wall and Woud was unable to collect cleanly. The ball fell to Taylor, but he scuffed his shot straight at the RCA keeper.

The two teams emerged for the second half in brilliant sunshine and fully five minutes before the officials were ready.

As in the game last week it was swinging from end to end as both teams looked for an opening goal. A good run by Armstrong down the left was picked out by Charlton and his cross into the box was met by Jennings, but he shot wide. Morpeth came back on the attack through Reid when he played a one two with Graydon before firing wide of the target.

RCA almost took the lead in the 75th minute when Lane and Armstrong combined to set up Jennings, but he elected to pass the ball across the face of the goal toward Cresswell, but his pass was too strong and went behind for a goal kick to the relief of the Morpeth defence.

The home team made their substitutions in an effort to instil some energy into a flagging game, but nothing seemed to work. However in the final 10 minutes they did take the game to RCA piling on the pressure, but every cross into the box was well dealt with by Woud who was looking to emulate RCA’s other young keeper in keeping a clean sheet.

Both side were cancelling each other out as the game entered its final minutes and it was probably a relief to both teams to hear the final whistle with honours even.

This was another workmanlike display from the lads and another point to add to our tally. Next up is Guisborough Town on Thursday in this re-scheduled match kick off is 7:45pm. Get along and watch our last home game of the season.