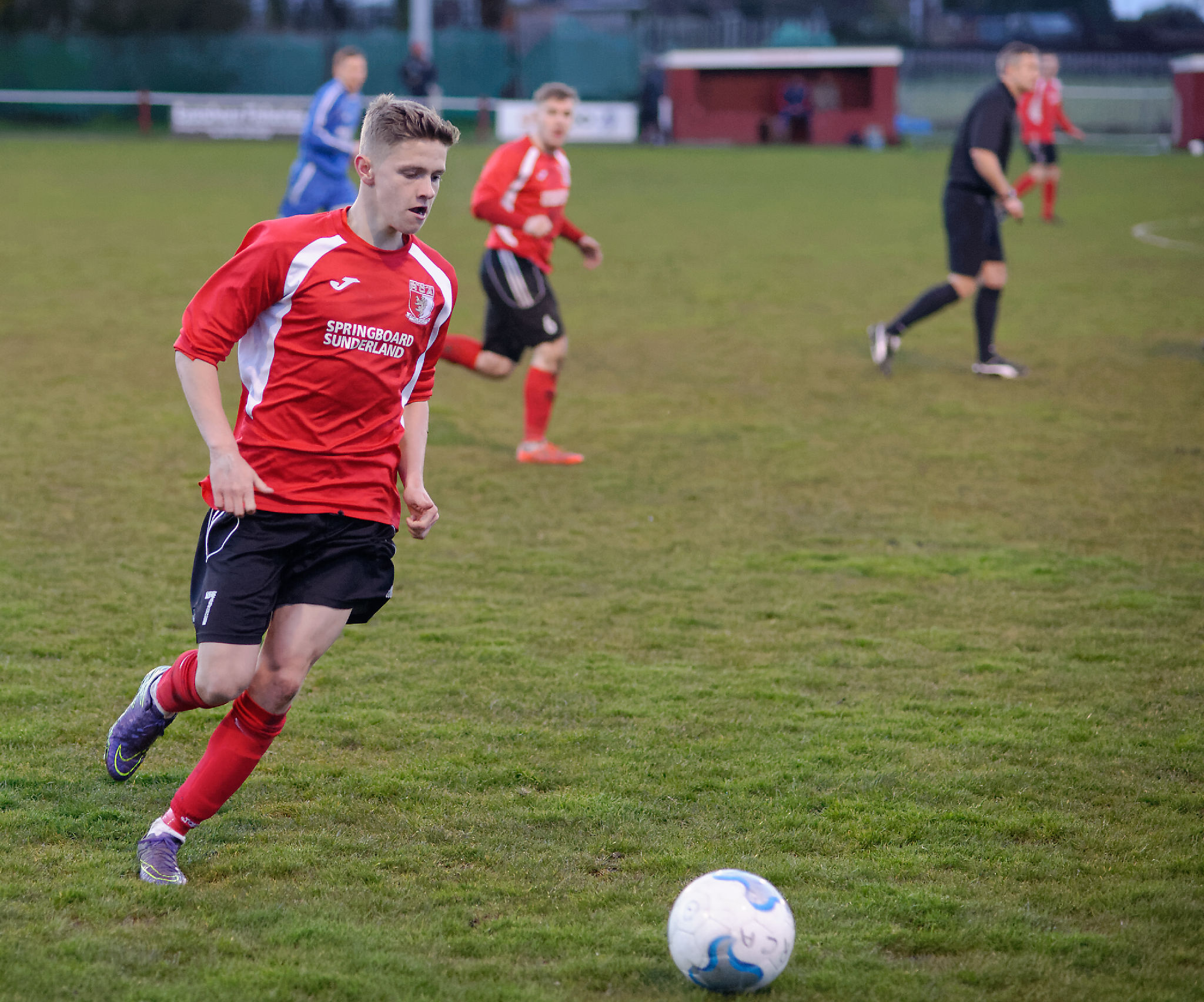 Kieran Graham in second half action.

Sunderland RCA were at home to FA Vase finalists Morpeth Town. This was Morpeth’s third match this week having already played on Monday (won against Washington) and Wednesday (lost against West Auckland) while we had already played against Marske on Tuesday, so both teams fielded changed teams for tonight’s match.

At 5:30pm this match was in doubt as torrential rain and sleet poured down on Meadow Park. The match referee, Mr Barry Gordon arrived to inspect the pitch at 5:45pm and declared it playable. The ground staff are to be applauded for the efforts they made in getting this game on.

The RCA management team had a dilemma defensively with the suspension of Buchanan and the injuries to Richardson and Armstrong and so Byrne was drafted in with Larkin moving from striker to central defence and two wingers, Lane and Gordon taking up defensive full back positions. Hughes and Wightman and McCulloch returned to the team which was as follows: McCulloch, Gordon, Lane, Byrne, Larkin, Noble, Graham, Charlton, Wightman, Hughes and Callen, subs: Butler, Woud and Proctor.

Morpeth took advantage of the slope in the first half and looked to test the RCA defence with high balls into the box, but the makeshift defence coped admirably in the opening minutes and McCulloch wasn’t really tested in the RCA goal.

The visitor’s had a penalty appeal, quite rightly turned down, after five minutes when Graydon burst onto a through ball from Jewels, but the ball caught under his feet and he fell to the ground.

The first real attack of note came in the 15th minute when Wightman controlled a long ball forward before sweeping it to the opposite wing where Callen dribbled inside two defenders before unleashing a low driven shot which Drysden turned round the post at full stretch.

From the corner Morpeth cleared and went on the attack and a freekick was given when McAndrew was fouled. Graydon took the resulting kick whipping in a wicked cross which Taggert headed wide of the far post.

As the game progressed it was RCA who looked to be creating the more clear cut chances while Morpeth were reduced to long range efforts. RCA should have taken the lead when they produced a stunning piece of play. A throw in on the right was picked up by Wightman he played in Hughes who slipped past two defenders before cutting the ball back into the path of Wightman, but with the goal at his mercy he scooped his effort over the bar.

More pressure came from Morpeth but with little end result, the only half chance came from a Graydon cross which McCulloch managed to get a fingertip to before Taggert and the ball went out for a corner. The keeper was injured in the process, but continued after a spell of treatment.

The home team were guilty of missing another open goal a few minutes later when Callen sent the ball wide to Graham who measured his cross onto the head of Byrne but, with only the keeper to beat, he headed well wide of the target.

Both teams looked to tire toward the end of the half and there were no further efforts on target.

The second half started as expected: RCA pushing forward down the slope and Morpeth trying to break on the counter.

The two teams were trying to play football with the visitors utilising the services of Graydon in the centre of midfield to great effect. Early in the half, a great ball forward by him found Bell in a bit of space, but his shot was plucked out of the air by Mcculloch.

The game was swinging from end to end as both teams looked for an opening goal, a good run by Callen was spotted by Noble and the RCA winger stepped inside before hitting a low shot which went just wide.

RCA took the lead in the 64th minute when Byrne picked out Callen on the half way line he turned a complete miskick into the perfect pass into the path of Wightman who sprinted past two defenders before passing the ball into the net beyond the reach of Dryden.

Worse was to follow for the FA Vase finalists. Two minutes later a long clearance from Larkin was collected by Wightman who slipped the ball to Hughes and his burst of pace took him into the penalty area where he smashed in a shot under the body of Dryden who gat a hand to it but couldn’t prevent it from crossing the line.

Morpeth tried to get back into the game and a good move involving Graydon, Reid and Bell ended in a cross into the box by Bell being well collected by McCulloch diving to his right.

To try and prevent the passing excellence of Graydon the manager placed a marker on him and in the final 10 minutes brought on Butler to try and nullify the game.

The final chances of the game came from freekicks. A Graydon free kick from the edge of the box went wide of the upright while a late free kick by Noble was deflected for a corner, from which Byrne headed over the bar.

Morpeth looked really tired at the end of this match as did a lot of the RCA players.

Three more points from a solid performance which has seen the re-emergence of the team spirit which had been lacking of late.

A couple of mentions regarding the younger element of the squad: Graham put in another solid performance in this match as did McCulloch in goal. However everyone contributed to a good overall performance.

We can look forward to the re-match on Monday. Remember it is a 1:00pm kick off.