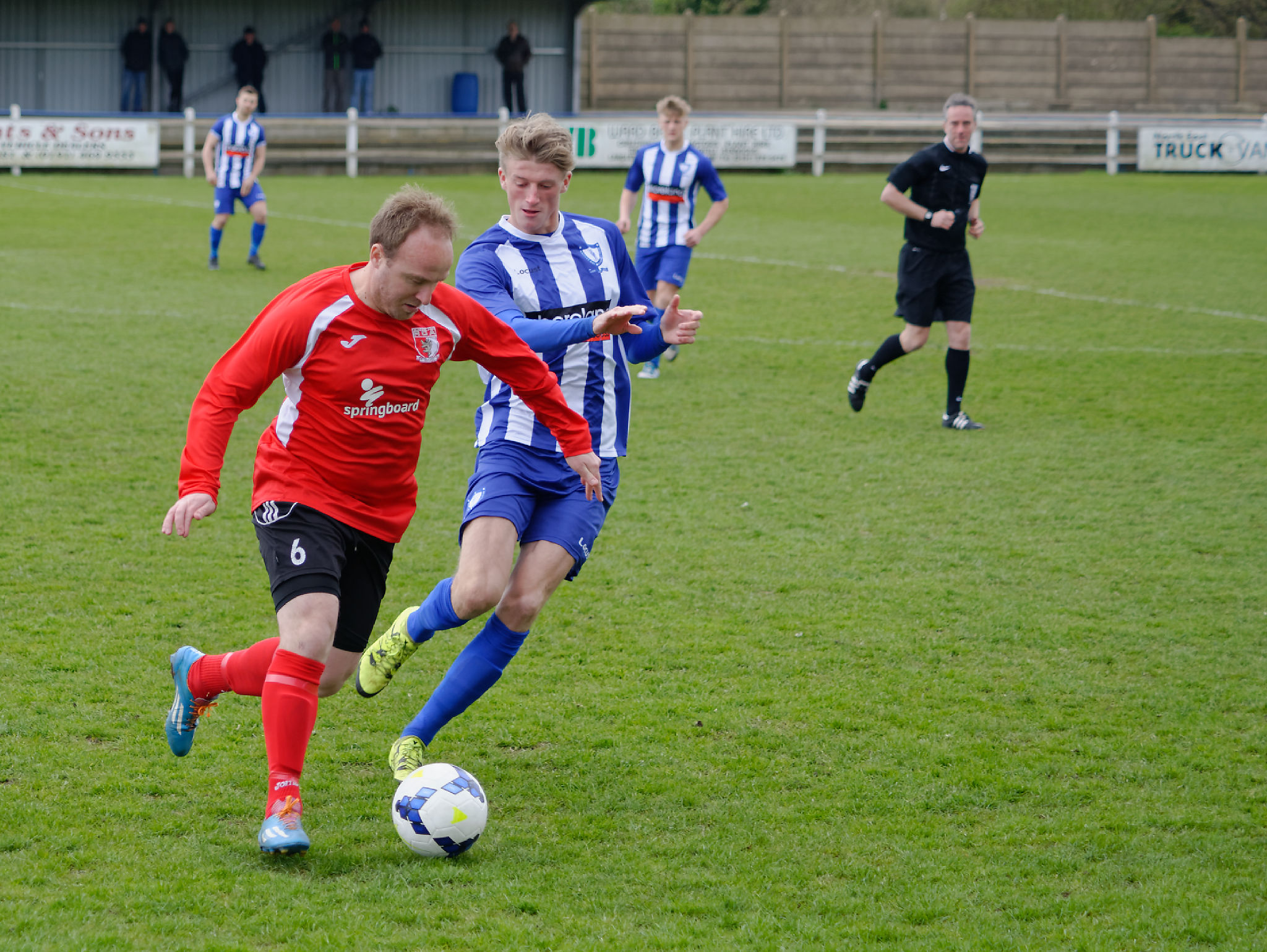 RCA’s injury ravished team travelled through the Tyne Tunnel to play Whitley Bay, and the injury crisis went from bad to worse as first Kevin Gordon declared himself unfit with a neck injury and then James Armstrong was injured in the warm up and replaced by Luke Richardson.

The good news was the return to the starting eleven of Michael Charlton after a lengthy absence with an ankle injury. Thomas Butler and Ross McNab were also recalled by the management team.

Whitley Bay were also suffering with injuries and had a number of players were nursing little knocks. The Bay team also included ex RCA players Callum Patton and Ashley Davis.

Both teams still required points to ensure first division survival for next season and with the fixture backlog it was becoming impossible to forecast what sort of team clubs would be able to field.

The home team started the better of the two teams pressing forward from the kick off and putting a very shaky looking RCA team on the defensive. RCA were trying to utilise the pace of Larkin and Charlton, but the Bay defence seemed able to cope in the early exchanges.

The first effort of the match came when a poor clearance was picked up by McFarlane and sent forward to Kempster. He squared the ball to Haley who fired in a long range effort which was comfortably saved by Woud in the RCA goal.

Although RCA seemed to be coping with the pressure there were far too many poor passes which allowed the home to put pressure on the defenders. In the 10th minute a good run by Davis was halted on the edge of the area by Buchanan and the ball was sent forward by Noble to Charlton. His cross into the box was met by Larkin but he couldn’t generate enough power on the shot and Gladstone able to pick up the ball.

The Bay took the lead in the 12th minute when another loose ball was picked up by Munro 30 yards out. He brought the ball forward before hitting a ferocious dipping shot which bounced just in front of Woud who could only parry the ball into the path of Kempster who drove the ball into the roof of the net.

The longer the half went on the more dominant the home team was becoming. However RCA did come close in the 25th minute when a ball out to the right by Butler found Charlton; he went past his marker before crossing into the box where Gladstone was relieved to tip the ball over the bar. inexplicably the assistant referee gave a goal kick.

Two minutes later and a great run down the left by Kempster was halted by a brilliant tackle by Noble, but the ball spun out of play for a corner. The corner was taken deep to the far post and although Woud managed to get a hand on the ball it fell to Davis who headed the ball toward goal, but Richardson was able to clear off the line.

The home team continued to put pressure on the RCA players and when a wayward back pass to Woud bobbled in from of the young keeper it looked odds on that Kempster would increase the Bay’s lead, but the keeper kept his head and although his clearance struck Kempster the ball went wide for a goal kick. The young Work Experience keeper on loan from Sunderland was kept busy and only a few minutes later had to be at his best when Munro fired in an effort from the edge of the box and he was forced to concede a corner turning the ball round the post at full stretch.

What was said to the players at half time seemed to get the right response as RCA looked a different team at the start of the half. Almost from the kick off Lane floated a ball into the feet of Larkin who turned and fired in a shot which flew wide of the post.

Two minutes later and Butler played a ball out to Charlton on the right. His cross into the box was met by Callen who dribbled past two defenders, but couldn’t find the killer touch to put the ball in net and Gladstone smothered the ball.

RCA were dealing with the aerial threat of Davis with both McNab and Buchanan making it difficult for the striker to get any meaningful touches. At the other end it was a different story as Hope and Butler got to grips with the Bay midfield, they were able to send balls forward quicker and it was the Bay defence that was wilting under the pressure.

In the 65th minute RCA almost scored when they were awarded a free kick 25 yards out. Butler took the kick and although he managed to dip the ball under the bar Gladstone was able to get a hand to the ball and divert it for a corner.

In the 70th minute RCA brought on Hughes for Charlton which was to prove a masterstroke by the management team. His first contribution to the game was to skip past his marker and drive in a low shot which struck a defender before Larkin got the final touch to guide the ball into the net.

The response from the home team was immediate as they sent a long ball forward toward Kempster. He controlled the ball before driving the ball into the box where substitute Day fired in a shot which was saved by Woud.

With the clock ticking down Callen caused problems for the Bay defence when he played a good one-two with Larkin before laying the ball to Hope on the left, but his cross looked to be cleared by Flynn, but Callen chased the ball down and won it back playing in Hughes who burst past the last defender and struck a terrific shot past Gladstone. The ball hit the far post and rebounded straight into the path of Hope who cooly slotted the ball into the net. Although Whitley Bay tried to respond it was not to be and the RCA defence, who had been in control for most of the second half gave nothing away.

The old adage of a game of two halves certainly applied today Bay were dominant in the first half and could have been 3 - 0 up, in the second half it was virtually one way traffic as RCA dominated proceedings. The introduction of Hughes caused major panic in the Bay defence. His pace was staggering at times and every time he got the ball it looked like something could happen.

So SRCA head for their 10th season in the Northern League first division, can the other senior team at the Stadium of Light do the same? The draw against Arsenal certainly keeps the pressure on Newcastle to deliver in their final three games. As I said after Thursday’s match, we can take heart from the second half performance and move on. Next up is Marske United who will be buoyant after their win against Champions elect Shildon on Saturday. Once again we are carrying a long injury list and will have to dig deep.