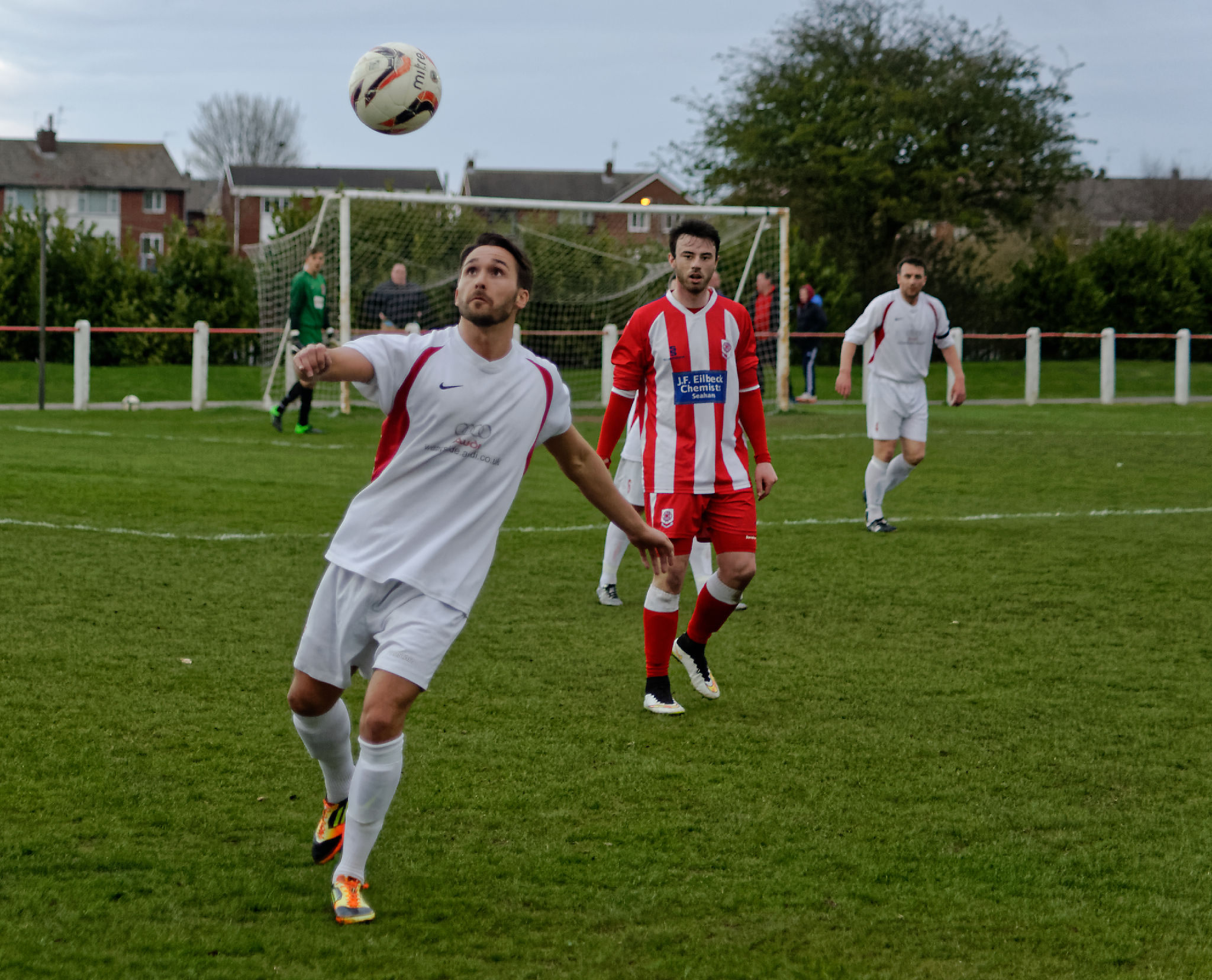 Kevin Gordon waits for the ball to come down.

RCA, with nine games in 19 days, understandably made changes for tonight’s derby against the highflying Seaham Red Star. Into the starting eleven came Armstrong, Callen and Wightman with the team re-shuffled so that Noble returned to central midfield, Hatch reverted to central defence and Richardson switched to right back.

The visitors started really positively taking the game to the home team and it was no surprise when the took the lead in the 3 minute, a slick move saw the ball played out to the left where Wightman slipped his marker before pulling the ball back to Noble who fired in a terrific low drive for his first goal of the season and they continued to press forward but were met with some stern defending.

In the 11th minute, and against the early run of play, Red Star were back in the game. A hopeful ball into the box should have been cleared by Hatch, but the ball rebounded to Lynch and the RCA defender bundled him over. Ex RCA player McBryde converted the kick sending Woud the wrong way.

RCA almost regained the lead in the 15th minute when Larkin played a delightful ball out to Wightman on the left and his measured cross to Gordon was volleyed over the bar. Two minutes later and Larkin again posed a threat as he burst past two defenders before sliding the ball into the path of Callen, but Walker was able to get a foot to the ball and clear the danger.

RCA were to rue these missed opportunities as the defensive frailties which have blighted the team in recent weeks returned. Richardson failed to deal with a routine clearance and Bird nipped in, controlling the ball before finding McBryde who drove the ball into the bottom corner of the net.

It was now Red Star’s turn to apply the pressure. A sweeping move saw Donnelly set Lynch away on a great run and his pass inside found McBryde who fired wide of the target. RCA were finding it difficult to get any forward momentum, but in the 35th minute should have had a penalty when Larkin ran past the left back, cut inside the box and looked to be pulled back as he tried to cross the ball, but nothing was given.

Red Star increased their lead in the 43rd minute when Hatch mistimed a tackle on the half-way line and the ball was picked up by Bird who took it on before smashing the ball into the net.

The visitors had the first opening of the second half when Callen sent a good ball into the path of Wightman, but he scuffed his shot wide. Red Star then took the initiative and could easily have increased their lead when Lynch found himself in space on the edge of the box, but fired straight at Woud.

Apart from the early chance, RCA struggled to get any forward play going and this was causing defensive mistakes. The match should have been over as a contest in the 59th minute when some poor defending by the visitors allowed Lynch to pinch the ball before setting up Bird for his second to give Red Star a 4-1 lead. Unassailable you would have thought, but RCA hadn’t fully read the script and produced a stunning 10 minute period reminiscent of the matches against Tadcaster and Hemsworth.

It was started with a good run down the right by Gordon, his cross into the box was headed clear as far a Richardson on the edge of the box, his skied shot looked to be covered by Newbrook, but somehow the ball slipped from his grasp and Callen pounced to stab home from a foot out. Three minutes later and it was 4 -3 as Larkin picked up a ball from Noble, broke forward before slicing his cross into the box; the ball hit the inside of the post and rebounded into the net game on as they say.

The RCA faithful didn’t have long to wait until their side equalised. Another scintillating run down the right by Gordon brought the RCA winger to the edge of the area and his low cross into the box was met by Charlton who volleyed home at the second attempt. However RCA switched off defensively and were dealt a killer blow when a long ball out of defence seemed to be dealt with by Hatch but his pass out of the box was intercepted by Reay who made no mistake from inside the area.

In the 85th minute Red Star were awarded an indirect free kick on the edge of the box when Hatch brought down Bird. Kerr took the resulting free kick where he caught keeper Woud off guard to fire in a shot which struck the bar before hitting the young keeper and settling in the net.

RCA continued to push forward and both Hughes and Lane went close, but in the end it was Red Star who came away victorious and moved up to joint second in the league, while RCA were left wondering what they have to do to get something out of a game. Answer, defend better. Having said that the second half tonight was a marked improvement on recent matches and to score four times away from home should give us some heart for the next six games. We have now scored 99 goals in all competitions however we have also conceded 99. Will we be the first team to score over 100 goals while conceding 100 goals in a season? Probably not the first.