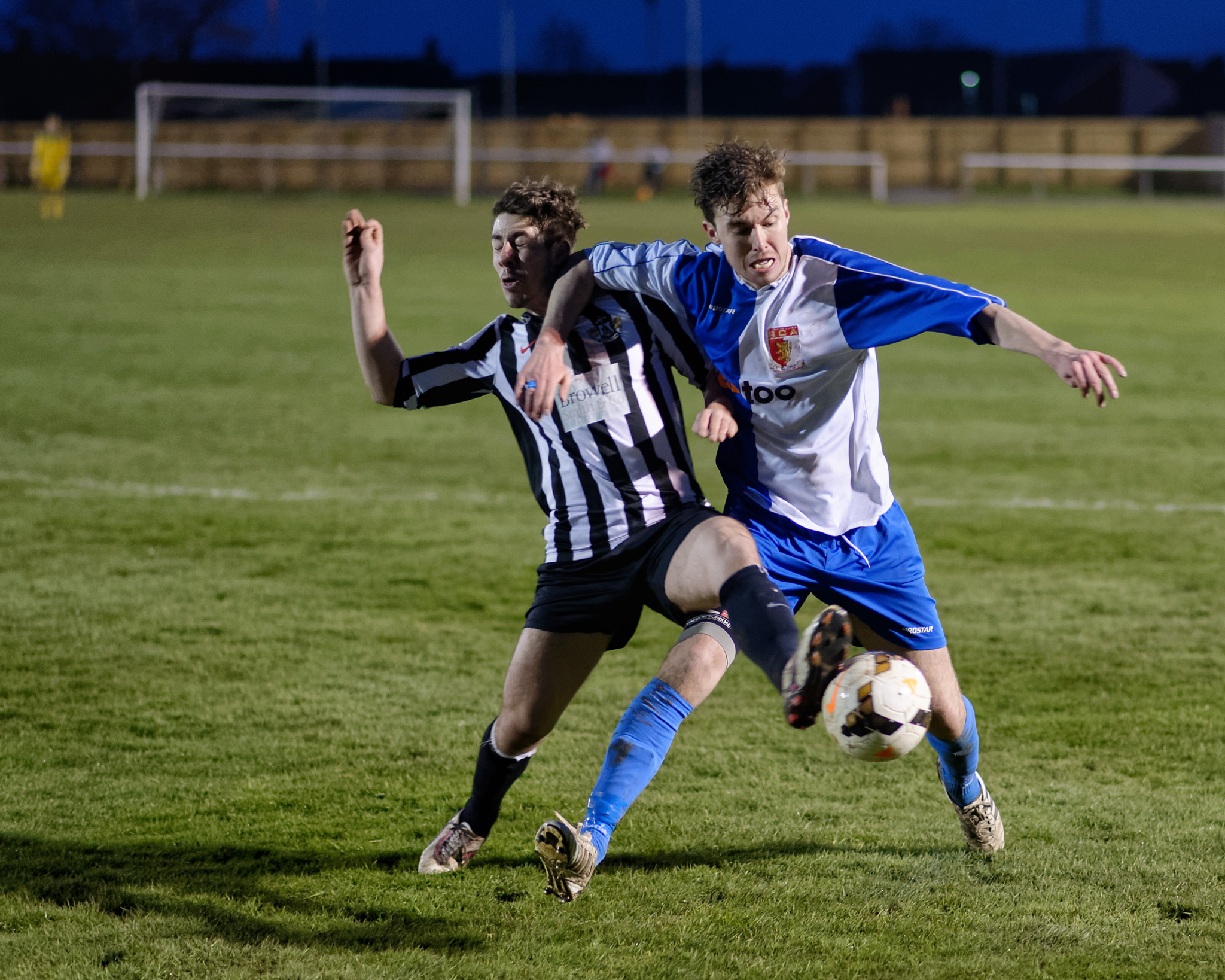 The Ashington defender clears the ball ahead of RCA's James Armstrong in the second half of the match..

Please click here for a few photos from the match.

More changes to the RCA starting line-up as once again work commitments and injuries continued to decimate the squad, however the inclusion of Davis, Byrne, Noble and Armstrong should have strengthened the side in the opinion of most RCA supporters.

Although both teams started the game passing the ball well it was Ashington who looked the most decisive in the final third.

After five minutes Grieve intercepted a wayward pass and sent the ball forward to Johnson who had found space on the left, his cross was met by Stevens who swept the ball wide of the upright.

This should have served as a warning to the RCA defence, but two minutes later and the same ball caught them napping again as Johnson picked up the ball before switching play to the right where Harvey crossed toward B. Harmison, but his header was saved easily by Woud.

RCA tried to get their passing game going and although they were playing some good stuff they seemed to hit a barrier and the final ball was inevitably going astray.

Ashington took the lead in the 21st minute as they once again took advantage of a misplaced pass and Harvey sent Johnson away on the left, this time the Ashington winger played a measured pass into the path of Downey who picked his spot driving the ball into the bottom corner of the net.

With little response from RCA it was the home side who looked the sharper and more likely to score and so it was that in the 28th minute another misplaced pass was intercepted, this time on the right and Harvey was left with loads of space in which to cross into the box where Stevens was left with the simple task of firing past Woud.

This second set back did get a response from RCA. A flowing move saw Butler pick the ball up on the halfway line before picking out Callen who slipped the ball to Gordon, he spotted Davis in space on the opposite wing and played a great ball to the RCA full back who took the ball in his stride before firing in a low effort which Grant managed to save with his feet.

As the game ebbed and flowed both teams were guilty of misplaced passes. Unfortunately for RCA there was worse to come as a long clearance looked to be heading straight to Byrne to clear, but the ex-Sunderland player completely missed the ball and Stevens was left one on one with Woud and slotted home to make it 3-0 with seconds remaining in the half.

The second half saw RCA looking a totally different team as they pushed forward looking to get into the game. In the 47th minute a through ball from Butler was picked up by Callen and the RCA striker hit a great shot which produced a magnificent save from Grant tipping over for a corner. Two minutes later and it was Hope who broke through into the Ashington penalty area picking up a Callen through ball before his shot was blocked by Grieve.

How RCA didn’t reduce the arrears in the 55th minute is beyond me. Armstrong played in Gordon who dribbled past two defenders before rounding the keeper, however his shot was brilliantly blocked by Grieve and the follow up shot from Gordon flew inches over the bar.

In the 56th minute Butler picked up the ball in the centre of the park before spraying a beautifully weighted pass to Lane who took the ball to the by-line before crossing into the box for Callen to head home his first goal since Hemsworth on 21st November.

Five minutes later and RCA had a goal disallowed when Butler, again the instigator, played the ball forward to Hope, his deft lob cleared the last defender and into the path of Callen who fired into the net, but the offside flag had been raised.

In the 75th minute B Harmison was shown a straight red card for what appeared to be an elbow into the face of Buchanan. In the resulting flare-up Buchanan (RCA) and Harvey (Ashington) were booked.

With a man advantage and playing a lot better in the second half, RCA pushed men forward in an attempt to retrieve something from the game, however the decision to push Buchanan forward seemed to diminish the attacking options of the visitors as they resorted to the long ball aimed at the RCA captain and both Grieve and J Harmison seemed to cope with this quite easily. The only real effort that either team had was when Lane got away from his defender on the right, cut inside and fired in a shot which Grant did well to hold.

In the second minute of Injury time Buchanan was dismissed for a second yellow as he tussled for the ball with Dixon and that basically summed up RCA’s evening. This was another game where we conceded goals from sloppy defending and poor passing. We seem to wait until we are 2 – 0 down before we start to play. We also, once again, showed a distinct lack of discipline; when will players learn in this team that once the referee has made his decision he is not going to change his mind? Berating him and arguing long after the event only serves to put us under pressure. On the plus side Mr Swales showed commendable restraint in not responding to the sustained goading of the Ashington supporters. We also looked to be getting back to our passing game in the second half and caused Ashington a lot of problems especially through the efforts of Tommy Butler, Glen Lane and Stephen Callen who has eventually got the Monkey off his back and should now be able to relax in games and the gals will flow again.

Next up at home a visit from the VA Vase finalists Morpeth Town and a return to Meadow Park for Mr Graydon.