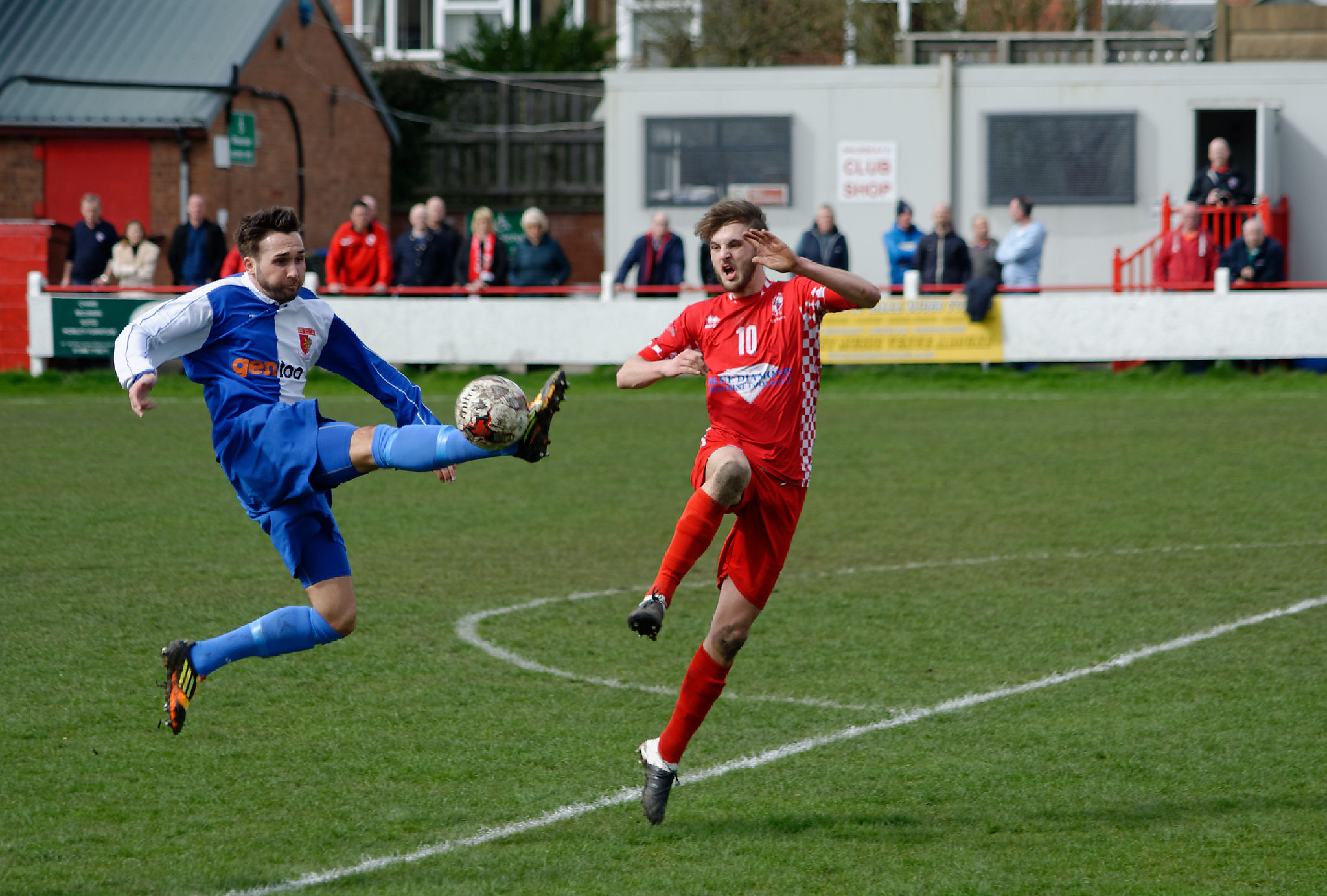 RCA’s Kevin Gordon gets in an athletic interception in the second half of the match.

With 10 games to play in the final month of the season we look to have secured enough points to make us safe although it would be better if we could get another two or three points on the board.

Before the start of the game we were informed that regular first team keeper, Jordan Harkess had been rushed to hospital with a broken jaw and possible fractured skull and we wish him a speedy recovery.

The return of Gordon from injury was the only plus at the management team looked at the selection of the team today; side-lined, are Armstrong (suspension) Charlton, Cummings, Davis and Larkin (injuries) and Hatch and Cresswell (working).

Shildon, as expected pressed forward from the off and RCA, although they had the advantage of the slope, were forced to defend in numbers.

Early in the game the home team showed what they were capable of when a ball forward by Moore was picked up by Bell who moved effortlessly into the box before scooping his shot wide.

A few minutes later and the same ball forward by Moore was picked up by Bell. This time he chipped the ball over Woud, but McNab was able to clear off the line.

In the ninth minute Shildon took the lead when the ball was played out to the right wing where Greulich-Smith managed to get half a yard on the defender before crossing low into the box for Wing to place the ball low into the bottom corner of the net.

Shildon continued to attack and RCA were finding it difficult to get any sort of passing going and were being penned back as the home team poured on the pressure. A good ball in from Rae found Greulich-Smith in space and the tall forward turned, but dragged his shot wide of the target.

A minute later a cross from Bell was volleyed over the bar by Rae.

RCA’s first meaningful attack came in the 20th minute when Butler found Lane free on the right. His cross into the box was headed behind for a corner, which was taken by Hope and although Buchanan was first to the ball Moore managed to head the ball clear.

Shildon increased their lead in the 21st minute when Groves was allowed to run at the defence as they backed off and his little chipped cross was met by Greulich-Smith who headed past Woud.

The home team had further chances to increase their lead as the took the game to RCA and Rae was guilty of another miss when he blasted over the bar before Bell was again off target on two separate occasions.

The second half saw RCA make changes: Richardson was replaced by Proctor with Gordon switched to right back.

It didn’t take long for Shildon to get back in their stride and only some brave goalkeeping from Woud kept RCA in the game as he saved at the feet of Greulich-Smith in the 47th minute and two minutes later Rae was sent through by Greulich-Smith, but once again the young keeper pulled off a great save diving at the feet of the Shildon forward.

Eventually RCA started to get some momentum building and it was substitute Hughes who looked to get on the scoresheet. Graham beat his marker on the right before crossing toward Hughes who, seeing Hayes off his line, tried to lob the ball over him, but it flew safely over the bar.

Five minutes later and Hughes was involved in the build-up of RCA’s next attack as he picked up a pass from Hope before sending the ball into the path of Callen, but his low driven shot was saved by Hayes at full stretch.

The nail in the coffin arrived in the 87th minute when a clearance was charged down and the ball rebounded to the far side of the penalty area where Shildon’s substitute Connor ws first to react and he fired home from eight yards out.

In a final flurry RCA’s Hughes was set up by Proctor, but his terrific drive hit the upright and rebounded to safety.

With nine games still to play we really need to be looking at getting some more points on the board just to guarantee safety for next season.

While we are not directly involved in the title race we may have a say in who finishes where as we have to play third placed Morpeth (twice), second placed Marske, and sixth placed Guisborough Town, three of the top six sides.

Next up a local derby away to Seaham Red Star on Tuesday, 7:30 kick off. Followed by an away match on Thursday, at Ashington which is also a 7:30 kick off.