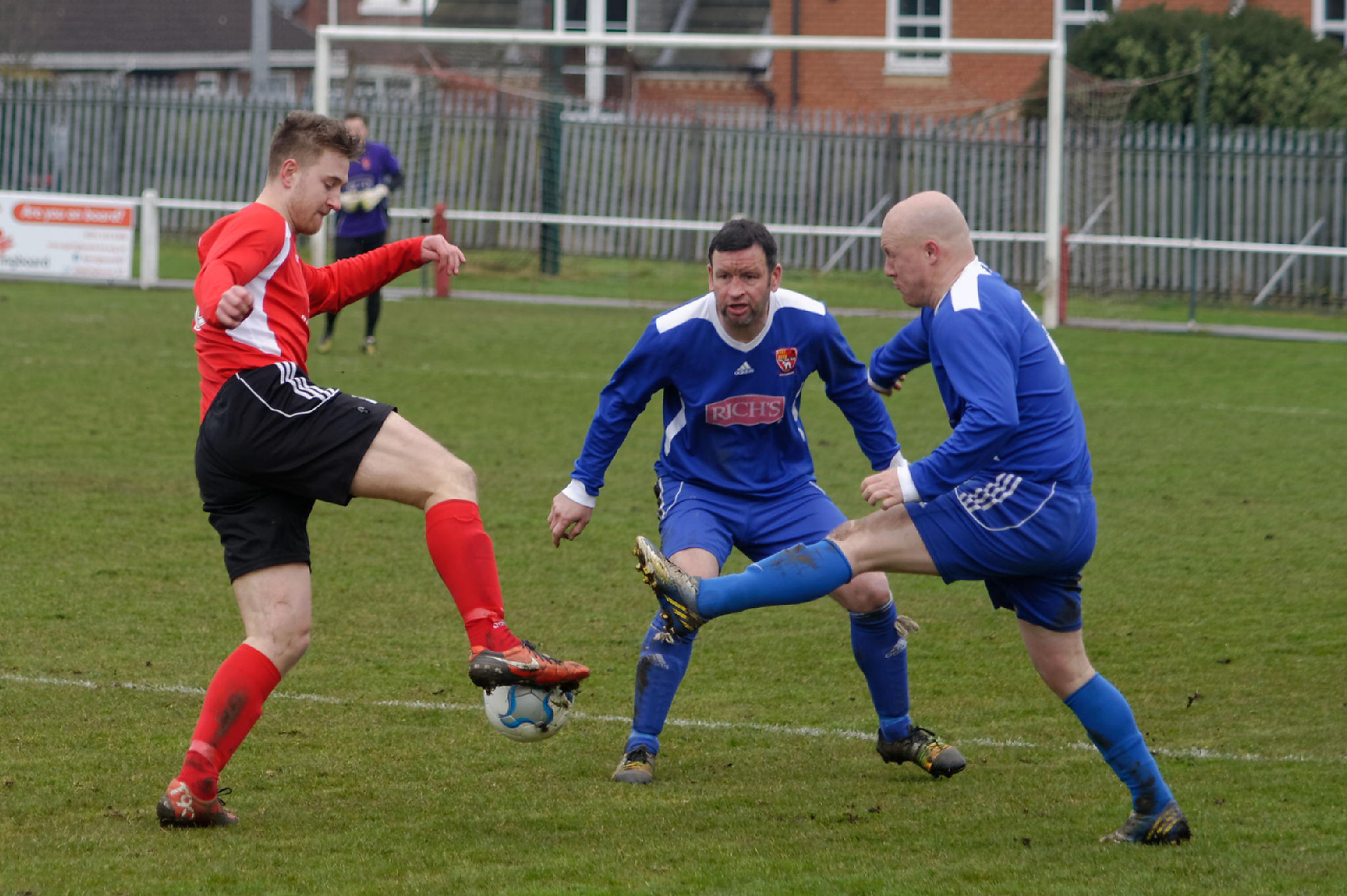 Shane Jennings up against two Terriers.

Four defeats in a row have seen RCA dragged perilously close to the relegation dog fight and today’s match against a Bedlington Terriers side, who have shown signs of improvement in recent weeks, was going to be another stern test for the lads.

The management team introduced new signings Michael Woud (goalkeeper) and Thomas Butler into the starting line-up for their debut. Noble returned after suspension and Proctor and Jennings were preferred to Cresswell and the injured Davis.

Bedlington took advantage of the slope in the first half, but it was RCA who claimed first blood when Woud threw the ball out to Noble, he sent the ball forward to Lane who had slipped his marker, he looked up and sent a deep cross to the far post where Wightman was on hand to head past Beale in the Terriers goal and into the net.

RCA were playing some good football in the opening spell and most of the pressure was coming down the right. In the sixth minute Lane again got free on the right and this time his cross was met by Jennings, but he couldn't keep the ball down and it flew over the bar.

The Terriers then produced a bit of magic of their own when Baxter burst past two defenders before shooting low, but Woud was able to make the save at full stretch before smothering the ball as Wright moved in.

The next RCA attack again came from the right, this time Proctor found Lane on the right he played the ball to Callen who in turn slid the ball to Jennings who dropped it off for Proctor who curled a shot toward the top corner, but Beale was able to claw the ball away.

Bedlington regrouped and started to play some good passing football a move started by Ferrell saw the ball played forward to Baxter who crossed into the box where Hudson's shot was deflected for a corner, from the resulting kick Woud was able to use his height to collect easily.

However RCA had to be at their best defensively as Baxter once again broke clear on the right, this time his cross was partially blocked by Hatch, but the clearance fell to Stephenson who found Hudson on the edge of the box. The Terriers striker turned and fired in a shot which went just wide of the upright.

In the 18th minute RCA should have increased their lead when Butler picked out a great run by Callen. He controlled the ball brilliantly before crossing into the path of Jennings who had his shot blocked by two defenders, if he had squared the ball Wightman was free on the left with an open goal.

Within minutes Wightman had a good opportunity when he latched onto a long ball from McNab, but fired his effort wide of the target.

RCA had picked up the pace of the game and were causing all sorts of problems to the Terriers’ defence, in the 22nd minute Noble and Butler played a number of passes between them to open up the Terriers midfield before the ball was sent forward, the bounce beat the defender and Jennings headed on to Wightman, cool as you like the RCA winger moved in on goal before delicately lobbing the ball over Beale and into the net.

Back came Bedlington, Ferrell stopped an RCA attack before sending a lovely ball forward to Drane who flicked the ball past Hatch and into the path of Hudson, but his effort went wide of the target.

The game was starting to get scrappy which suited RCA who were in command of the game. A good move down the left saw Wightman set up McNab, but his effort was saved by Beale and cleared away for a corner.

RCA should have sealed the match in the 32nd minute when Callen received the ball from Butler, he crossed into the box for Jennings who squared it to the unmarked Proctor who, from less than five yards out missed an open goal.

RCA continued to probe looking for another goal and in the 40th minute, after a promising attack on the left, the ball was again cleared for a corner. As usual we sent up the two towering defenders, unfortunately the ball was cleared from the front post by Pendlebury and when Butler's hasty clearance hit Baxter the speedy winger chased after the ball. Woud, aware of the danger, raced from his line, but Baxter skipped past him and from an acute angle fired home to make it 2-1.

Two minutes later Bedlington were to suffer a blow when Wright was carried from the field after his head had collided with the arm of an RCA defender.

Bedlington started the second half much the brighter and it took some sturdy defending by the RCA back four to keep them at bay.

In the 55th minute Ferrell again sent a good ball forward to Hudson, this time the striker laid the ball off for Drane but his low drive went agonisingly wide of the target.

Both teams were reduced to 10 men when a flare up between Jennings and Stoneman which saw Staneman grab the Jennings by the throat and instead of just walking away Jennings retaliated with a head butt.

After this the game settled down a bit and although end to end there were few clear cut chances until the 70 minute when Lane was sent free, but he shot straight at Beale.

In the 81st minute a cross into the box by Baxter was headed just wide by Walton with his first touch of the game after coming on as a substitute a minute earlier.

Two minutes later and Bedlington almost equalised with Baxter again the instigator as he slipped past two tackles before firing in a dipping shot which Woud was happy to tip over the bar.

In the 87th minute RCA produced one of the best moves of the game when Noble sent an exquisite ball forward to Wightman who controlled it before bringing in Gordon; he cut in from the right before pulling the ball back to the edge of the box where Hope was on hand to steer the ball out of the reach of Beale to nestle in the bottom corner of the net.

To add insult to injury Bedlington were further undone deep into injury time when Gordon again broke free of the Terriers’ defence before playing the ball to Hope. This time with a bit more to do he dribbled past three defenders before rounding the keeper and blasting the ball into the roof of the net.

Welcome back Callum Hope, 25 minutes on the pitch six minutes of magic and two very composed goals. More to the point three points after a dismal run of results.

Another sending off has not improved our disciplinary record and another one which could have been avoided if he had just walked away.