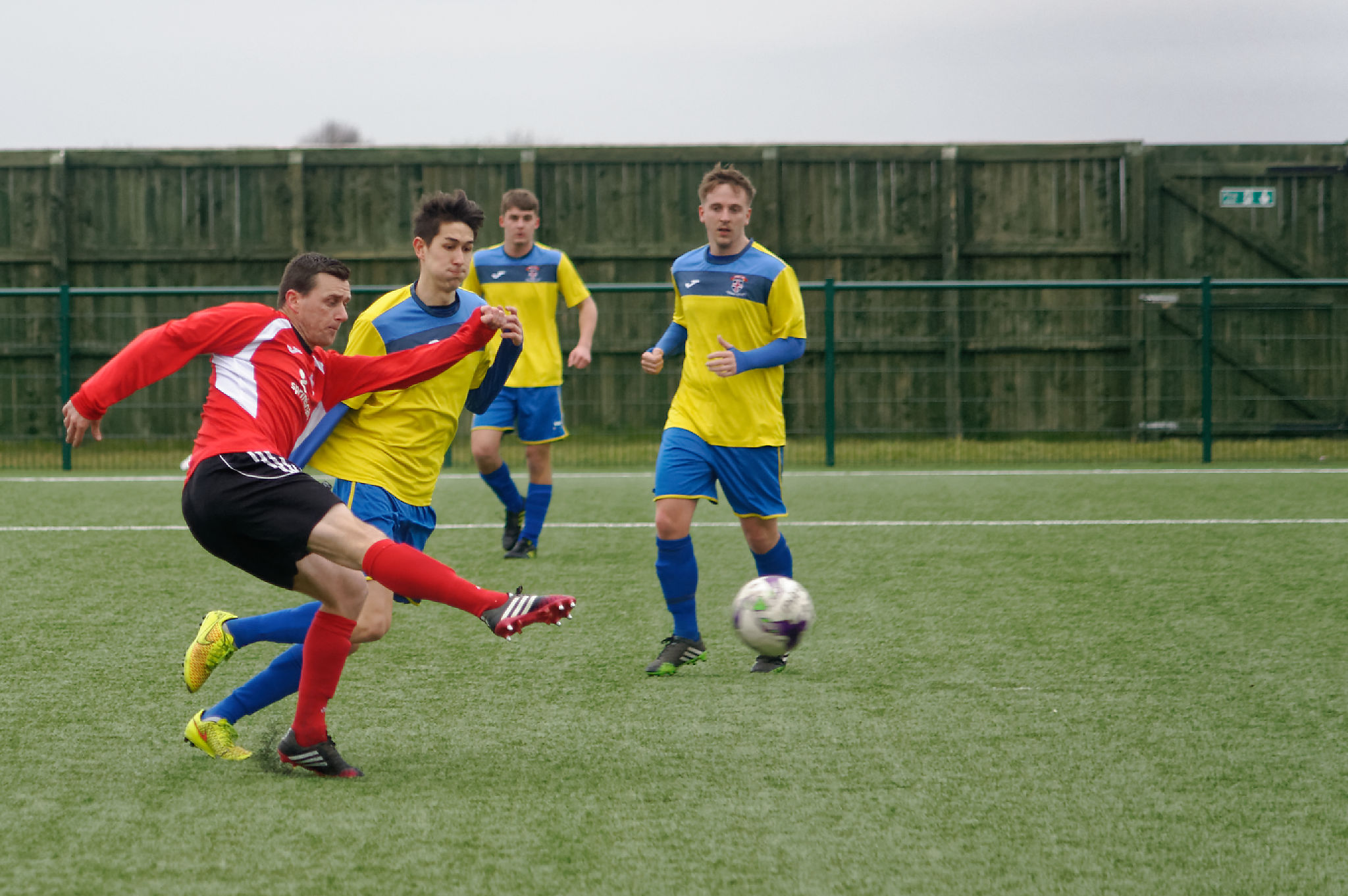 RCA's Colin Larkin fires in a shot in the second half of the match.

RCA travelled to Consett to play third bottom club Durham City and after their last two victories against Washington and Dunston expectations were high. The management team selected an unchanged side from the one that played so well against Dunston on Tuesday night. They also welcomed back Kevin Gordon after injury and he took his place on the bench.

The game kicked off with high drama. From the start the ball was played into the corner by Durham, McNab and Moore collided and the Durham manager, Moore, then kicked out at McNab and was dismissed.

This early setback did not deter Durham and they immediately went on the attack down the left and a cross into the box was met by Saunders in acres of space, but he lifted his shot over the bar.

RCA tried to set up some sort of forward momentuml, but their efforts were poor and Durham’s big defenders kept the RCA attackers at bay.

In the ninth minute Jennings went down injured and was replaced by Pounder. Ten men Durham continued to press forward and their passing game was causing all sorts of problems for the RCA defence. In the 15th minute a freekick was awarded on the edge of the box and Allan stepped up to curl a wicked shot inches over the bar, although Harkess seemed to have it covered. It took RCA 20 minutes to register a meaningful effort on goal. Larkin, playing on the right wing, sent in a low cross which was controlled by Callen, he slipped the ball to Wightman who cut inside before unleashing a right foot drive which scraped the post.

Durham were awarded a penalty in the 28th minute when Saunders was fouled, and the same player took the kick which was saved by Harkess diving to his left.

RCA’s best spell of the game followed with Proctor finding Callen with a through ball, he sent in a reverse pass which fell to Pounder, but he curled his shot wide of the far post. Two minutes later and Pounder raced into space on the left angle of the box before firing in a low drive which flew past Jennison and the far post and a minute later Wightman again beat his marker before cutting the ball back to Noble who fired in a long range effort which flew over the bar.

RCA’s injury bug struck again in the 40th minute when an innocuous challenge by Pounder left him in damage.

RCA started the second half well and early on had a shout for a penalty turned down after Noble went down in the act of shooting. The referee waved away RCA’s protests.

Noble was involved in RCA’s next attack as the midfielder played a one-two with Larkin before blasting the ball over the bar.

In the 50th minute RCA were awarded a free kick on the edge of the box when Brown was fouled. McNab curled a wicked free kick towards the far post, but Callen was just unable to get the touch that would give RCA the lead.

Two minutes later and a long ball forward by Cummings was chested down by Callen into the path of Proctor who hooked the ball over the bar.

Durham were now hitting RCA on the counter attack and Saunders was proving to be a thorn in their side with his devastating turn of pace and his direct approach.

In the 55th minute a ball out from Archer was picked up by Saunders who skipped through two challenges before crossing to Allen who fired over the bar.

Wightman, who was getting into some positions on the left, set up Larkin on the hour, cutting the ball back into the penalty area for the RCA striker, but Jennison pulled off a stunning save to deny Larkin from eight yards out.

Durham lifted themselves after that shock and could so easily have taken the lead when both Allan and Saunders were guilty of shooting wide when in good positions.

In the 70th minute Wightman again broke down the left and beat two defenders before hitting in a low cross which was met by Callen. His shot hit the post and rebounded to Larkin who once again was denied by a superb save by Jennison. Immediately the play switched to the other end as Jennison's kick sent Saunders away one on one with Harkess, but the Durham frontman sent his shot wide.

Durham did not have to wait long to take the lead and it was that man Saunders again. This time he made no mistake when bursting clear of the RCA defence and blasting the ball home from the edge of the box. They almost doubled their lead five minutes later when Bakhti made a 40 yard run up the left touchline before crossing into the box where Saunders was once again unmarked, but he could only steer his shot wide of the target.

RCA tried their best in the final ten minutes to get something out of the game, but they never really threatened the Durham goal until the final minute when they were awarded a corner which was taken by Brown and headed inches wide by Callen.

Not sure what to say about this performance. We looked very complacent in all departments. The new look formation in the first half did not seem to work and the injuries to key players did not help. That being said Durham tried to play football on the ground while we persisted to lump hopeful balls forward which Archer and Wilkinson picked off fairly easily.

10 man Durham did what 10 man RCA did last week. They stayed strong and resilient and on this form should beat the drop.

We move on to Norton and Stockton Ancients on Wednesday, kick off at 7.30pm.