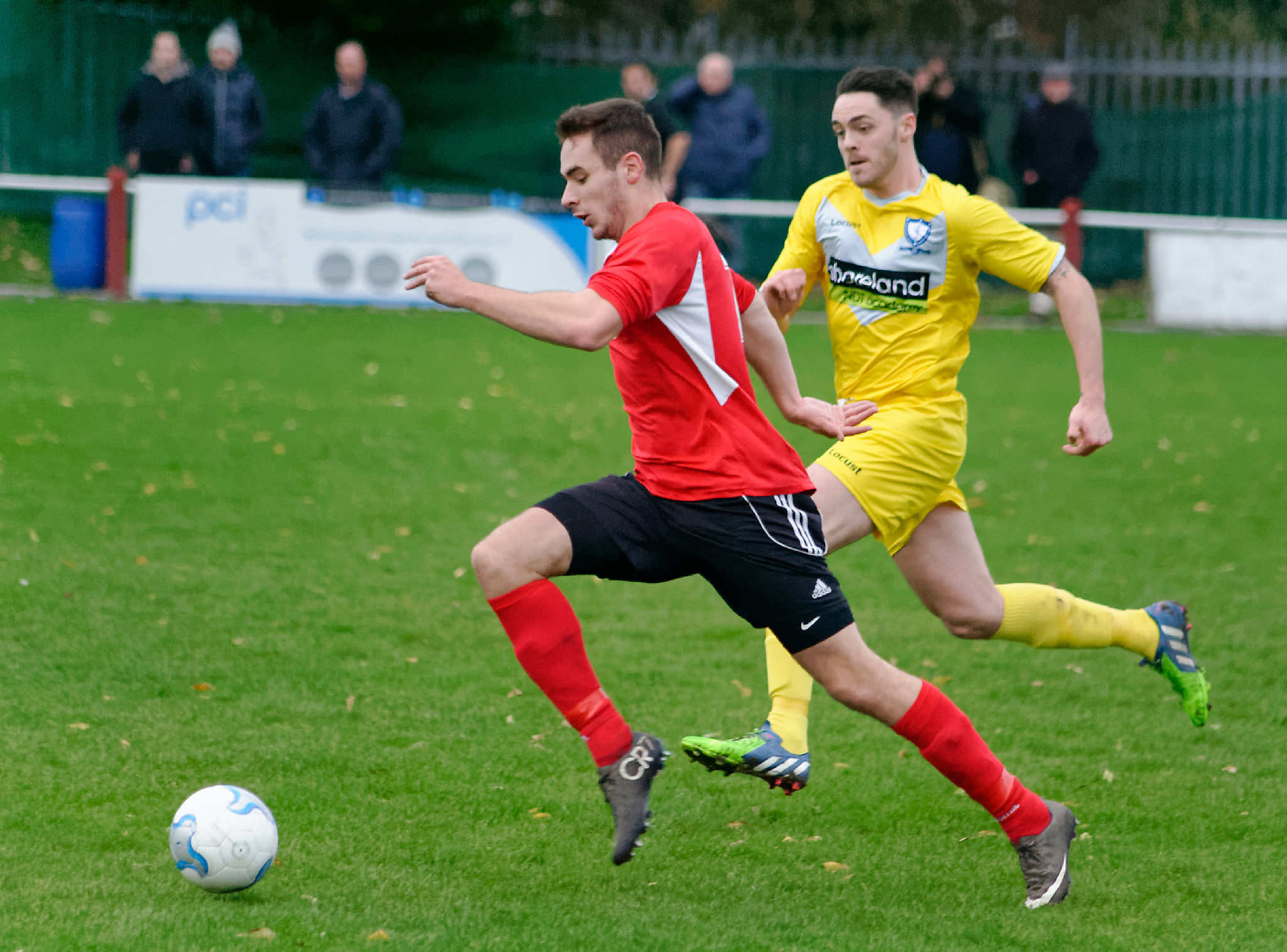 The threatened overnight rainfall did not materialise and so the pitch was passed fit to play.

The RCA management’s selection problems for this match were very different to recent weeks, this week there was a full squad to choose from save for the two long term injuries to Davis and Armstrong, both of whom are progressing well.

Into the starting eleven came Harkess for Talbot (on international duty in Ireland), Noble returned in place of Hope and McNab came in for Lane.

Whitley Bay, who are an improving side, made a number of changes to the team that won at our neighbours RCW in mid-week.

The visitors took advantage of the slope in the first half and were the first to put together an attack with Hughes breaking into space before shooting high and wide from the edge of the area. Whether it was the conditions under foot or the tactics of both teams there was little in the way of quality football played in the opening 15 minutes as both teams looked to match each other all over the park.

In the 16th minute RCA’s first chance fell to Callen who ran onto a through ball from Charlton. He checked back to beat his marker, but allowed Laws time to come back and clear his shot for a corner. The corner kick was taken by Proctor and was met by Callen who powered in a downward header which was cleared off the line by Bramley.

The “Bay” responded with a number of raids down the left, the first a long ball from Gladstone was picked up by Kempster and the speedy winger turned inside before seeing his shot blocked by Drysdale. Then McDonald intercepted a pass meant for Gordon and set off an mazy run which saw him drift past two challenges before firing in a shot which hit the side netting.

In the 27th minute a suicidal back pass was picked up by Hughes but Harkess, having read the danger was able to close down the striker and block the shot for a corner, the corner was met by Laws whose glancing header flew wide of the far post. Two minutes later and the influential McDonald picked up another loose ball before sending a great forward pass to Hughes who cut the ball back before unleashing a low drive which Harkess did well to turn away for a corner. The resulting kick saw Bertram play it to the edge of the box to Kempster who drove the ball over the bar.

Having been under pressure RCA suddenly sprang to life, a quickly taken free kick by Noble set Callen free on the left and he squared the ball to Proctor who shot wide from the edge of the box. Then in the 40th minute a a move involving McNab, Charlton and Noble saw the three of them combine to tear through the visitors’ defence; the cross from McNab was punched away by Gladstone with Larkin and Callen ready to pounce.

The tide was turning as the game entered the end of the half. A great run by Gordon ended with a cross into the box which Callen met, but could only steer over the bar. Then in a dramatic finale, Noble won possession and the ball was played forward towards Charlton on the halfway line, Gladstone, the “Bay’s” keeper, inexplicably ran 20 yards to tackle the RCA winger who slipped the ball past him before being brought down. The referee awarded a free kick and a yellow card was shown to the keeper. However justice was done as the free kick taken by Proctor was floated to the toward the back post where Callen rose to head home and give the home side a half time lead.

So often this season RCA have started the second half slowly and been punished and today was no exception as the visitors swept forward looking for the equaliser. A lovely through ball from Bertram was brought under control by Bell, but his shot didn’t trouble Harkess who picked it out of the air after the initial shot had been half blocked by Buchanan. A minute later and another attack by the visitors seemed to have been stopped when Drysdale headed a Kempster cross away, but the ball fell to Hughes who blasted in a shot which Cannoned off the post and away to safety.

The threatened rain started to fall heavier making the condition under foot a little difficult and players were slipping as they controlled the ball.

RCA started to get into the game as it wore on and on the hour mark Callen flicked on a header to Gordon but his shot was blocked by McDonald at the expense of a corner. The kick was taken by Hope who clipped it to the near post where Callen headed it on to the back post, but Laws was able to get to the ball just before Drysdale and headed the ball clear.

Callen was becoming a major threat as time and again he broke free of his marker only to find his way blocked or his final ball to a colleague fell short of its target.

In the 71st minute Kempster produced a piece of magic on the right. Receiving the ball from McDonald he slipped the ball inside his marker before clipping the ball to the bye-line and then producing a sublime cross to the far post where Hughes was on hand to volley home.

The equaliser was short lived as RCA broke down the other end within minutes and were awarded a free kick when Callen was fouled. Hope curled the kick into the box where it was half cleared by Laws, but the ball fell to Larkin on the penalty spot and the RCA striker sliced the ball into the top corner of the net.

With 15 minutes to go the visitors pushed forward once again looking for another equaliser, but stout and determined defending by the RCA back four meant that Harkess was well protected. The memory of last Saturday’s last kick of the match equaliser must have been on the minds of every RCA player and they dug deep to keep out the visitors. At the final whistle there was visible relief all round the ground from the RCA supporters.

This was not our best performance of the season, but we ground out a great result against a decent Whitley Bay team who will improve as the season progresses. They say it is the sign of a good team that they continue to win even when not playing that well. 11 games undefeated in the league is fantastic for any team in this league and for us to maintain it with a relatively small squad is even more amazing. I know I keep banging on about team spirit but it is there for everyone to see. Let’s keep it going lads.

Is there a piece from another

Is there a piece from another report, from a Norton & Stockton match, mixed up in that report? "Ancients" "Poole", "Davies" and "Martin" don't seem to be in context, somehow.

Amended cheers Keith. At least someone reads my reports.