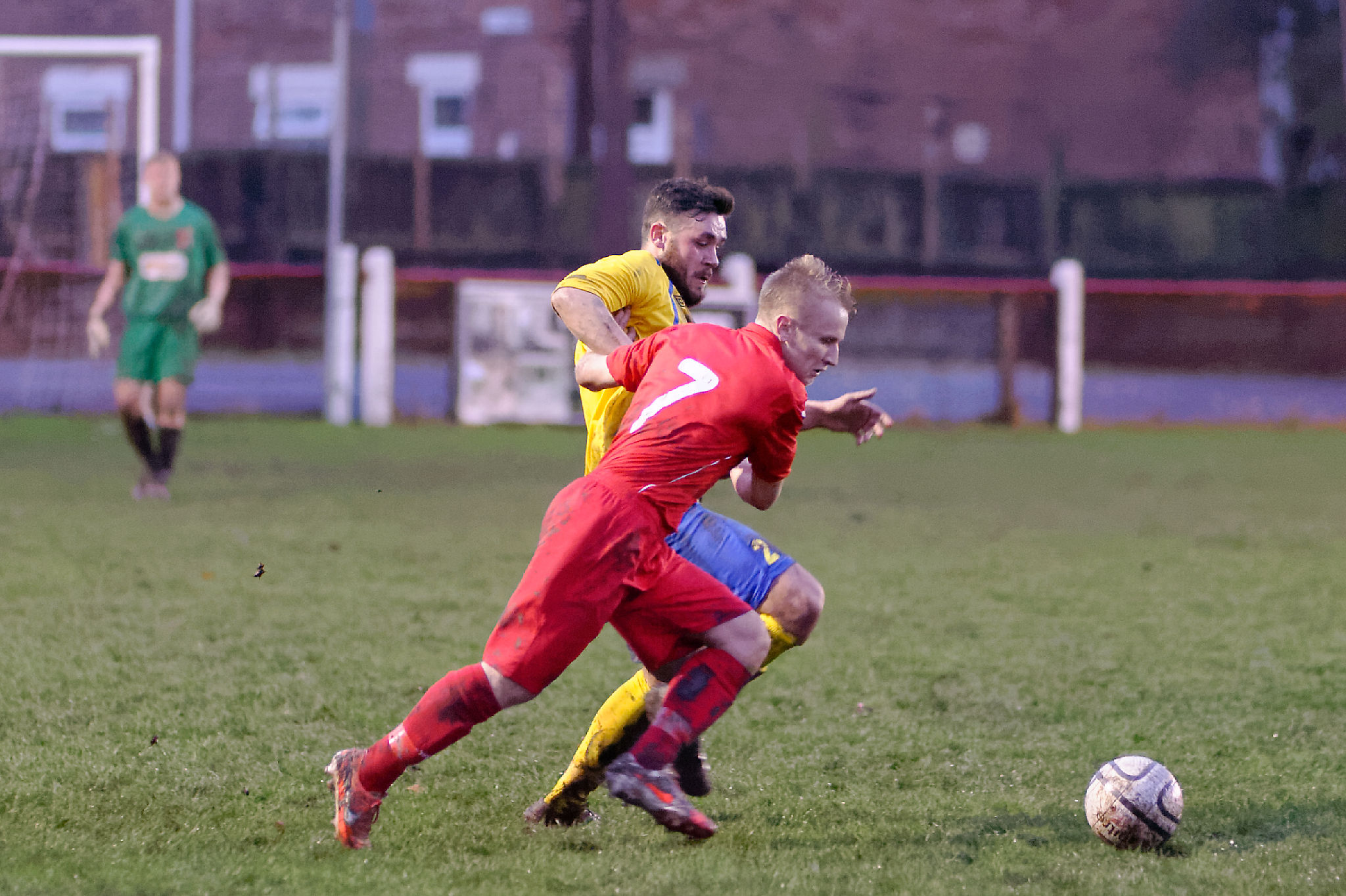 A quiet opening to the game saw both teams trying to adapt to the conditions, however in the fourth minute when Melvin intercepted a poor back pass he looked certain to score, but slipped and the chance was gone,. Within seconds the RCA striker did open the scoring when a ball into the box by Gordon found its way through to him and he shot instinctively at the goal and the ball shot into the net off the back of a defender.

As the pitch got worse it was Bedlington who were applying the pressure in an attempt to get back into the game. A great build up saw Dummett send the ball forward to Walton who clipped the ball on to Benjamin on the edge of the area, he found Kallum McGlen inside the area, but the full back shot wide.

Two minutes later Talbot was called into action when making a terrific save from Stephenson’s shot which looked destined for the bottom corner.

In the 16th minute RCA were awarded a corner on the right. Hope took it quickly playing a short ball to Gordon who returned the ball to Hope and his curling shot was well saved by Denton at the expense of another corner, Proctor took this one from the other side and the ball was headed clear by Stoneman before being punted upfield to Walton who beat the offside trap and was allowed a free run on goal, he cut back inside before shooting but Talbot was able to parry the shot away but the advancing Stephenson made no mistake with a tap-in from inside the six yard box.

The game was literally getting bogged down with little in the way of goalmouth action, chances were few and far between.

Lance McGlen’s long throw was headed away by Drysdale but fell invitingly for Walton, who volleyed in a terrific shot which produced a stunning one handed save to deny the home team the lead.

RCA almost took the lead in the 28th minute when a through ball from Proctor fell perfectly for Melvin inside the area but a last dirch tackle from Lance McGlen sent the ball away for a corner. The corner was floated to the back post where it was half cleared but fell to Charlton who fired just wide of the target.

Ferrell was leading by example in the middle of the park urging his players forward and driving the whole team on. Just before the break he picked the ball up on th eedge of the area and fired in a shot which produced another fine save from the young RCA keeper.

The start of the second half saw the home team on the front foot and it was Ferrell again who almost caught the RCA defence napping when he tried to lob Talbot from 30 yards out, fortunately for RCA Talbot was able to recover and made the save look easy.

Stephenson was the next to try his luck as the "Terriers" looked to push home their territorial advantage,  but he shot wide from a good position.

It wasn't until the hour mark that RCA had their first chance of the second half. Gordon and Melvin combined on the right and when the cross came in it was met at the back post by Lane who sliced his shot high and wide.

RCA brought on Pounder and Larkin to replace Melvin and Charlton and the change made an almost immediate effect with Larkin picking up the ball on the left wing before sending in a cross which was met by Pounder, but Denton was able to comfortably save the header.

In the 73rd minute RCA took the lead after their first real spell of pressure in the second half. Gordon produced a burst of speed to get past his marker before sending in a low cross. Stoneman's attempted clearance struck Pounder who, with his back to goal, responded instictively, turning and blasting the ball home from close range to record his first goal for the club.

Within minutes Gordon had a great opportunity to increase RCA's lead when he broke away before firing and although his shot beat the keeper it went agonisingly wide of the post.

For all the endeavour of the players the pitch was taking its toll and there were a lot of tired legs on display. Ferrell was still urging his players on and Buchanan, RCA's captain for the day was doing a similar role for his team.

With time running out and deep into injury time, RCA tried to run down the clock, taking the ball into the corners. however in the fourth minute of injury time Ferrell won the ball from Callen on the edge of his own area before picking out Denton who in turn gave the ball to Dummett who carried the ball forward before sending in a cross to the far post where it was headed into the net by Benjamin.

That was to be the final action of the game as Rebecca Welsh blew for full time straight from the restart.

The run continues. 14 unbeaten is a great record.

By our own admission we did not play well today, but still managed to get a point. Sometimes you just have to battle for everything and once again we showed the fighting spirit within the team and it saw us through today.

Next up Whitley Bay next weekend and the little matter of the Tyne and Wear TV camera's at out training on Wednesday.