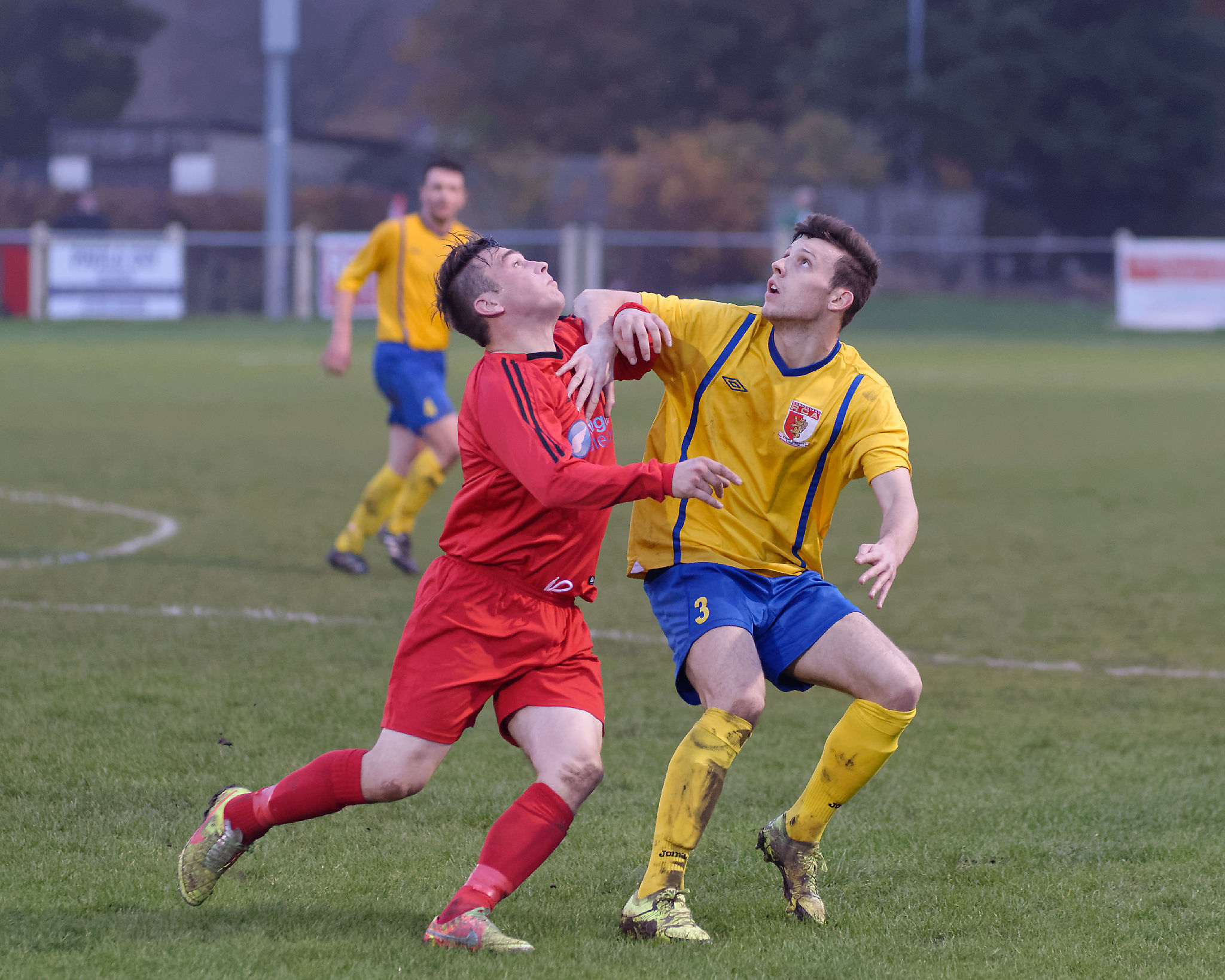 RCA left back Ross McNab holds his position in readiness for winning a high ball.

We All Stand Together - a blogger's view of the day.

RCA made the trip to Silsden in West Yorkshire for this FA Vase first round tie.

The management team, as expected, made changes to the team who performed so heroically on Tuesday in progressing to the next round of the Durham Challenge cup against Dunston UTS.

In came Harkess, Buchanan, Noble, Proctor, Richardson and ater a late fitness test Gordon was also declared fit and took his place in the starting eleven as RCA looked to extend their unbeaten run to 13.

After the rain of the last few days, the pitch looked in remarkably good condition, although it was sodden in places.

Silsden almost got off to a dream start as from the kick off the ball was played into the path of leading goalscorer Wademan who showed lightning pace to outstrip the RCA defence before cutting inside and unleashing a thunderous drive which the advancing Harkess did well to parry and Drysdale cleared up field.

Not to be outdone RCA went on the attack, Noble finding Melvin inside the Silsden half with a great ball. The RCA striker took the ball past three defenders before shooting high over the bar.

The next threat came when a RCA attack broke down and the Silsden keeper Thorpe sent a ball toward the right wing where Nicholls managed to get to the ball first and finding himself in space he elected to shoot low but Harkess managed to save with his feet and McNab picked up the pieces and cleared down field.

The home side were exerting a lot of pressure and in the 10th minute Harkess had to be alert again as a floated cross from Hunter looked to be dipping under tha bar but the RCA stopper palmed the ball away for a corner.

RCA were looking to get their passing game going, but were being knocked out of their stride by the home side's busy midfielders. However in the 12th minute Charlton almost broke the deadlock when he controlled a pass from Noble before turning and shooting from just inside the penalty area, but Thorpe had the shot covered and made the save look easy.

As RCA got more composed they started to make opening behind the Silsden defenders and in the 16th minute a great run by Callen was rewarded with a corner. Proctor took the corner which was headed away by Ryan but fell to Melvin on the edge of the box but his shot went looping  over the crossbar.

The home team were finding it difficult to get the ball forward as RCA picked up the pace of the game and when noble won the ball in midfield to stop anothre attack he quickly released the ball to Melvin who slipped the ball on to Charlton but he fired over the bar.

Two minutes later and another chance went begging when a Proctor freekick was headed over the bar by Callen, for all their possession and attacking play RCA had only produced one shot on target in the opening 20 minutes.

The game swung to the opposite end as Silsden looked to get a grip on the game. Having won a corner on the left they almost took the lead from the resulting kick as Wademan rose high to power in a header which looked destined for the bottom corner of the net until Proctor stuck out a leg to clear. The resulting corner saw Firth head wide of the target.

This was turning into an entertaining match as both teams looked to attack when they had the ball. A route one ball down the midddle from Harkess almost caught the hosts napping as Callen latched onto the ball before produce a fine save from Thorpe tipping it round the post for a corner, Proctor took the corner to the far post where Buchanan headed the ball down and in the goalmouth scramble that followed there was a haf chance for Melvin but Firth cleared the ball.

RCA should have taken the lead in the 32nd minute when Melvin picked up a pass from Richardson, skipped past his marker before picking out Proctor on the edge of the box but his side footed effort went wide of the upright.

Back up the other end and Silsden were awarded another corner when Wademan almost got the better of Drysdale but the RCA defender managed to stab the ball away. Collinge took the corner and played it to Lee who fired in a shot which flew over the bar to the relief of the RCA supporters.

Back came RCA and a throw on the right by Richardson was collected by Melvin who turned and crossed the ball toward Callen but Firth was alert to the danger and cleared the ball.

As the match drifted towards half time a breakaway by Silsden saw Ndlovu sprint 30 yards before passing to Wademan who tried to find Nicholls on the right of the box, but the pass was brilliantly cut out by McNab who then cleared the ball up field.

Silsden came out for the second half with a lot more purpose and immediately pushed RCA onto the back foot. A ball from Thorpe found Nicholls on the right and the diminutive winger flasheda shot right across the face of goal and inches wide of the far post.

Two minutes later and Nicholls again picked up the ball on the right, ran at the RCA defence before squaring the ball to Hunter who powered in a shot which Harkess saved at full stretch.

RCA's first attack of the second half came via McNab, picking the ball up on the half way line he produced a stuuning cross into the box for Gordon but his header was blocked by Ryan and Firth cleared the ball up field.

Silsden took the lead in the 53rd minute. When a RCA free kick was cleared up field by Firth it fell to Ndlovu who played the ball forward to Wademan who slid the ball past Harkess at the second attempt.

RCA were stunned into action and within four minutes were level. Noble played the ball wide to Melvin who flicked the ball on to Gordon; his cross to the back post was met by Callen who laid the ball off to Proctor who stroked the ball into the net.

With an hour gone RCA looked like they wanted it more than their hosts and the Silsden players were looking very tired at this point. A dribbling run from Melvin produced a magnificent save from Thorpe, then a minute later a cross into the box from Proctor was punched away by Thorpe only as far as Charlton who flashed in a shot which was blocked by Firth.

The only response at this time from the home team was a effort from Hunter which Harkess saved quite easily.

In the 73rd minute RCA should have taken the lead when once again Gordon slipped his marker on the right before crossing to Proctor, his shot was saved by Thorpe but flew across the box to Callen who from 3 yards out somehow flicked the ball over the bar.

The relief of the Silsden players was short lived as in the next attack RCA took the lead. A brilliant solo run by Callen looked to be well defended by Silsden until he squeezed the ball square to Proctor who somehow managed to curl a shot which crept in at the far post past the despairing dive of Thorpe.

Five minutes later and Silsden almost equalised as Collinge was allowed to run unchecked before sending in a powerful shot which Harkess saved at the second attempt.

A minute later and RCA increased their lead when when Gordon picked up the clearance from Harkess on the right, moved past his marker and sent in a delightful cross which Larkin met with a full blooded header which gave Thorpe no chance as it looped into the top corner of the net.

RCA seemed to relax a little and Silsden threw caution to the wind. Ndlovu fired in a shot which went just wide and then in the 87th minute they were thrown a life line, they sent 10 players up for a corner which was headed clear but fell to Ndlovu who fired in  terrific strike which Harkess could not hold and the ball went over the line to make it 3 - 2.

RCA wrapped up the game in the 90th minute when Larkin raced onto a long clearance to pick up the ball thirty yards out before rounding the keeper and slotting home.

This was a very entertaining match which was thoroughly enjoyed by everyone that I spoke to. RCA maintained their unbeaten run over 90 minutes and ran out worthy winners in the end.

However Silsden played their part in keeping the game alive for 75 minutes until they started to tire and then RCA took control and super sub Larkin stole the show in the last 15 minutes. Another all round workmanlike team performance and a credit to the Northern League.

Silsden were excellent hosts on the day and we wish them well for the rest of the season.

The journey home was all the more sweeter for the victory and a place in the 2nd Round of the Vase.