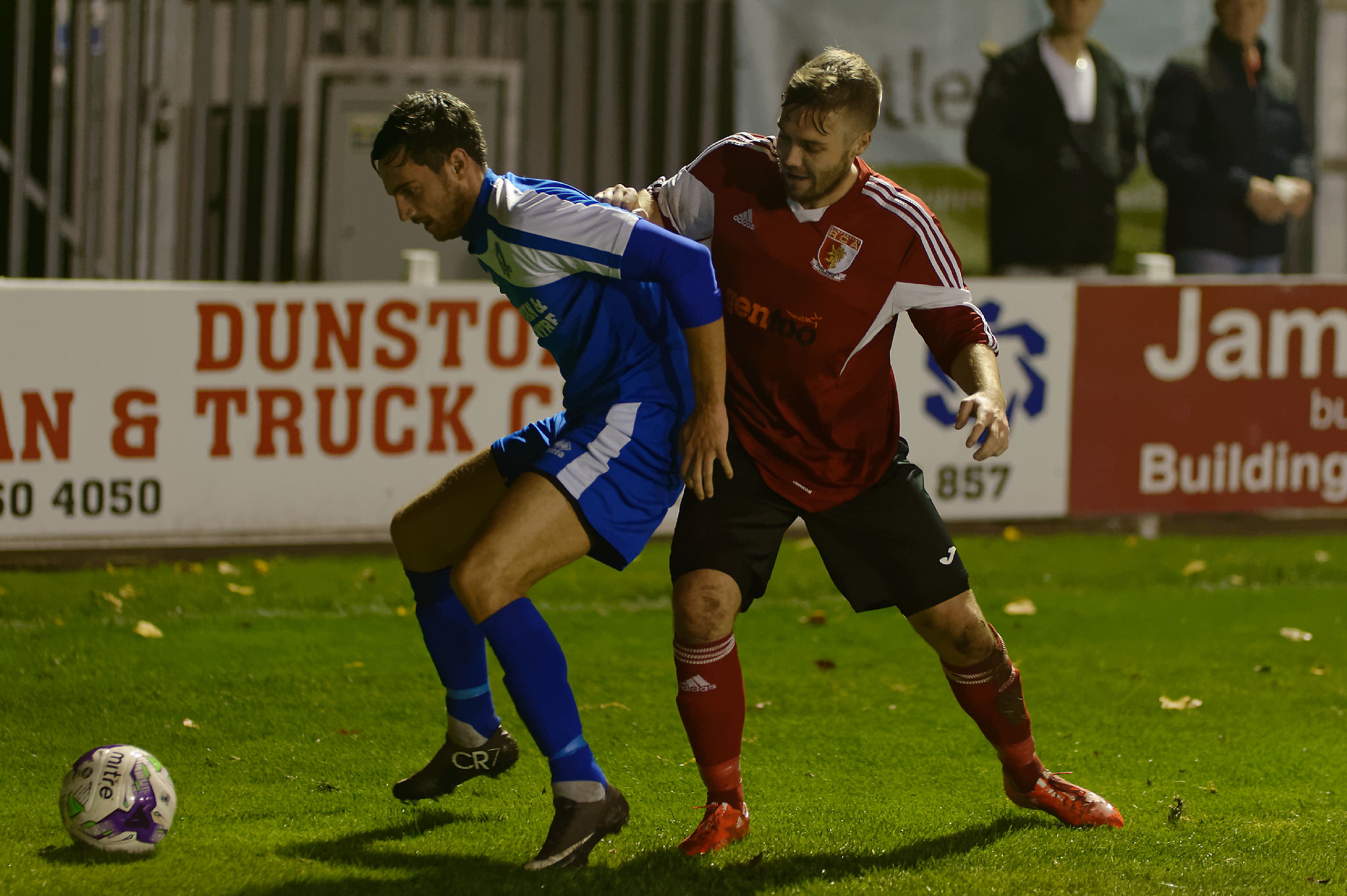 Please click here for some noisy photos from the match.

This Durham Challenge Cup tie against Dunston UTS provided the management team with a chance to assess the fitness of a number of first team players returning from long term injuries. Once again they had a squad of 18 to choose from and after a long discussion made seven changes to the team who drew 2 – 2 with Durham City on Saturday. Into the team came Carr, Byrne, Drysdale, Brown, Hope, Scott and Larkin with Armstrong and Powell also added to the bench.

Tonight was also an opportunity for the team to equal the club’s record of 12 games undefeated while in the first division of the Northern League, the 11 already played is a fantastic achievement for such a young team, but shows what can be achieved with team spirit.

The game kicked off with RCA attacking the clubhouse end and in their first attack they almost took the lead. Melvin ran onto a ball from Hope, jinxed his way though four or five tackles before stabbing the ball just wide of the Dunston goal. Dunston responded to this with a well worked move which saw Gilhespy play the ball forward to Pearson on the right, he drove forward before squaring the ball to Shaw who fired into the net from eight yards out.

The home side looked the more forceful in the opening period and almost doubled their lead when Pearson again burst forward to collect a loose ball from a headed clearance by Drysdale before crossing into the area where Fisher blasted the ball wide. With RCA forced to defend and hit on the break it wasn’t surprising that chances were few and far between. Two efforts by Morien were fired wide of the target while a shot by Richardson was well stopped by Talbot.

As the half drifted towards its conclusion RCA were awarded a corner on the right which Hope took. His cross was met superbly by Byrne with a bullet header which rocketed into the net.

The second half opened with RCA pushing forward, obviously buoyed by their late success in the first half. Charlton skipped past two challenges before laying the ball off to Scott whose shot took a wicked deflection and sailed away for a corner.

After the opening 10 minutes of the second half Dunston looked to take command again and there followed a succession of near misses. In the 55th minute Steinmetz received the ball on the right wing and produced a stunning cross which hit the top of the crossbar and bounced over for a goalkick. Three minutes later and an RCA clearance was collected by Martindale who sent the ball out to the left wing where Brooks managed to control the ball before sending the ball into the box, but Morien again sent his effort wide.

Charlton tried to get the visitors moving again with a slick one-two with Melvin, but the home defence managed to block the final shot from Thomas.

Richardson, who had been a thorn in the side of the RCA defence all evening, almost created a goal out of nothing: chasing down a loose ball he managed to keep it in play before crossing to Pearson inside the six yard area, but he directed his header wide.

The lack of match fitness was starting to tell on some of the RCA players and in the 65th minute after a poor pass was picked up by Pearson he switched the ball to Shaw who crossed the ball to the edge of the box where Richardson was on hand to volley home to give the home side the lead. What happened next was “Roy of the Rovers” stuff.

On came Callen to join the fray, with his first touch he played the ball in to Melvin who shot wide of the target. The resulting goal kick was controlled by Noble, on for Brown, and he sent an inch perfect pass into the path of Callen who hit the ball across Connell and into the corner of the net. Dunston seemed to implode at this point as RCA moved up through the gears. Callen and Melvin combined to set up Charlton, but his cross shot went wide. Then Charlton picked up a ball from Carr dribbled past two defenders before being flattened. Carr took the freekick and found Larkin at the far post, but his shot was saved by Connell.

In the 75th minute Charlton again dribbled past two defenders and again was brought down, this time inside the area and the referee, after a slight hesitation, awarded a penalty to RCA. Larkin stepped up and fired the ball into the net to give RCA the lead for the first time in the match. Dunston and in particular Richardson tried to rally, but as has been seen on so many occasions recently when we get our heads in front we are a very difficult team to breakdown.

The final 15 minutes were played out with RCA frustrating the home team by keeping possession while Dunston seemed content to send the ball long in the hope that it might fall to Richardson and time and again RCA were able to clear the ball easily.

This match proved the commitment of every member of the squad tonight and bodes well for the future of football at SRCA.

The management team must take credit for putting together a group of players who are willing to work so hard for one another and have a “never say die” attitude. Tonight for 65 minutes we were second best, but we kept plugging away and working hard and in the end we got our rewards.

Next up the little matter of a trip to Silsden in the sunny climes of West Yorkshire for the next round of the FA Vase. Can we keep the run going?