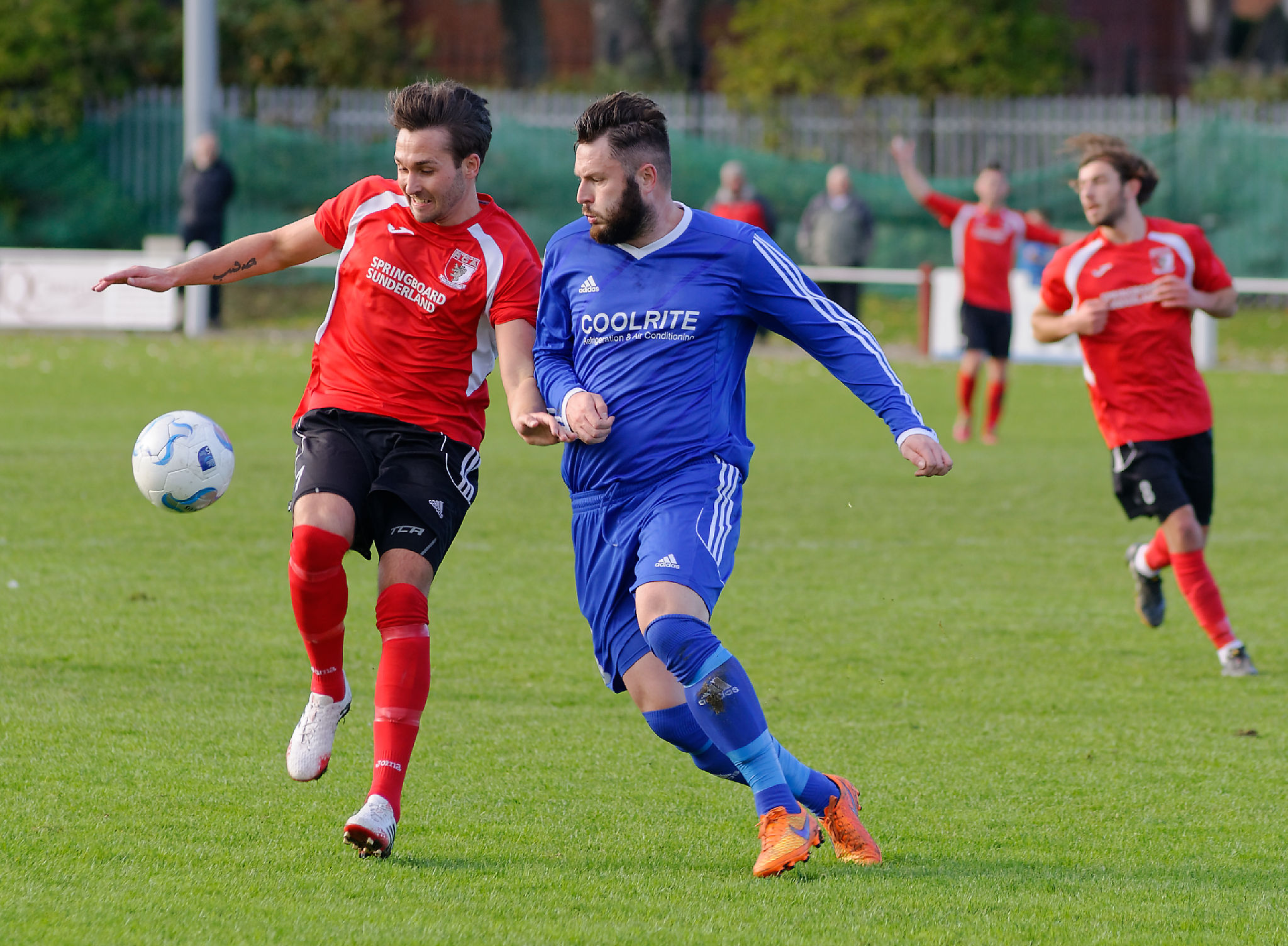 RCA welcomed Washington to Meadow Park for this EBAC Northern League clash, the visitors, so far unbeaten in the League, boasted no fewer than eight ex-RCA players in their squad.

With more injury worries surrounding James Armstrong, the management team decided to give new signing Glen Lane his RCA debut. Other than that change the team remained the same as for the mid-week victory against Marske. However the bench looked a lot stronger than of late with the return of Harkess, Drysdale and Scott to add to Carr and Richardson.

The match could not have started better for the home team as they took the lead in the opening minute when a long ball forward from Davis was controlled on the edge of the area by Melvin who squared the ball into the path of Charlton and although Carmichael half blocked the initial shot Charlton followed up to sweep the ball into an empty net.

Washington were in obvious shock from this turn of events and it could have got a lot worse a few minutes later when once again a well worked move involving Proctor and Davies saw more confusion in the visitors defence when the ball was crossed into to penalty area and Melvin was able to nip in, but he stabbed his effort wide of the post.

The “Mechanics” eventually got their act together and in the 10th minute they were awarded a corner after some persistent play by Winn on the left. The corner, taken by Coghlan, was headed clear by Buchanan but only as far as McGuinness who smashed a left foot shot just wide of the upright.

A succession of corners to Washington five minutes later led to RCA’s next attempt on goal as “on loan” keeper Talbot collected the corner kick from Coghlan and spotting Melvin’s run launched a great ball forward to the RCA striker who controlled the ball before hitting his effort over the bar.

Two minutes later and Davis put the visitors under further pressure with a well timed run down the right. He picked up a pass from Noble before crossing into the area towards Callen, but Preston was able to clear the danger.

That was to be the last action of the game for the RCA skipper as picked up a nasty groin injury a minute later and had to be substituted, with Luke Richardson replacing him.Almost immediately Washington mounted an attack from the left wing, Okus flicking on a McGuinness pass into the path of Davison who glided a cross to the far post where Winn could only direct his header over the bar.

The tide seemed to be changing in favour of the visitors and Talbot had to be at his supreme best to tip a Coghlan freekick over the bar.

RCA needed to respond to this pressure and it was Callen who relieved it with some good hold up play, bringing Melvin into the action and forcing a save from Carmichael; the ball fell to Gordon who clipped the ball toward the back post where Swansbury managed to clear under pressure from Callen.

Three minutes later and a run by Callen was stopped when he was fouled 25 yards out. McNab took the free kick which dipped just over the bar.

The home team had picked up the pace of the game again and it wasn’t long before they mounted their next attack. A ball forward from Noble was collected by Melvin who played Lane in. The debutant took aim and hit a terrific shot which struck Preston and flew wide for a corner. Proctor’s corner was met by Buchanan who headed over the bar.

RCA doubled their lead in the 43rd minute when Noble once again found Callen on the left. He cut inside two defenders before bursting into the penalty area and to the bye-line before crossing into the six yard box where Melvin had the simple task of tapping home from two yards out.

With the clock ticking down to half time Washington were awarded a corner. Coghlan took the kick and floated it to the far post where Okus was on hand to head home to make it 2 -1 at half time.

Kicking up the slope in the second half, RCA took the initiative away from their opponents and almost scored in the opening minute when Melvin made another good run before seeing his shot canon off Preston and fall to Charlton at the far post, but his shot was cleared by Swansbury.

RCA regained their two goal cushion in the 52nd minute when Melvin picked up a through ball from Proctor before cutting the ball back into the path of Charlton who slammed the ball home despite the valiant efforts of Carmichael to keep it out.

It was end to end entertainment as both teams looked to get forward at every opportunity. In the 55th minute a goalmouth scramble was cleared by McNab, the ball fell to Davision who crossed the ball into the box where Tait headed over the bar.

With both teams employing long ball tactics the game became a little stale, but that was all to change when the “Mechanics” were given a lifeline in the 75th minute. RCA lost the ball in Washington’s half and the ball was switched out to Winn on the left wing. He sent in a wicked low cross towards the far post where Davison managed to stick out a toe to direct the ball into the net.

A frenetic final 15 minutes ensued with Washington throwing bodies forward in an attempt to get a draw from the game and RCA looking to counter attack.

In the 80th minute Winn once again caused problems down the left; his cross into the box was met by Okus, but the recent signing from Durham could only scoop his shot over the bar.

RCA responded through Callen, who broke down the left before cutting inside and unleashing a shot which Carmichael saved,. He sent the ball forward toward Davison who chested the ball to Walton, but Talbot managed to collect the thunderbolt of a shot with ease.

In the final five minutes, with their backs to the wall, the RCA defence looked solid and when the ball penetrated it Talbot was always on hand to calm things down.

With the visitors pushing forward the inevitable happened when a long clearance out of defence found Callen in acres of space. He burst into the box before looking up and seeing Drysdale in a better position squared the ball and the substitute fired home.

This was a fantastic result and capped off an astounding week, in the space of sven days we have taken 7 points from 9 against three of the top four teams in the league.

We have moved up to fourth in the league after this result and have now gone eight league games without defeat. Other teams will be starting to take note of us now and we need to maintain the standards we have set ourselves.

Manager Martin Swales said after the game, “We didn’t make a very good start to the season but have picked up in recent weeks, to beat Washington today was a great achievement and I believe it is onward and upward for us. Last season’s troubles are definitely behind us.”

Our next fixture is Durham City at home. Please note that this is a change: the fixture has been reversed at the request of Durham City and the League.