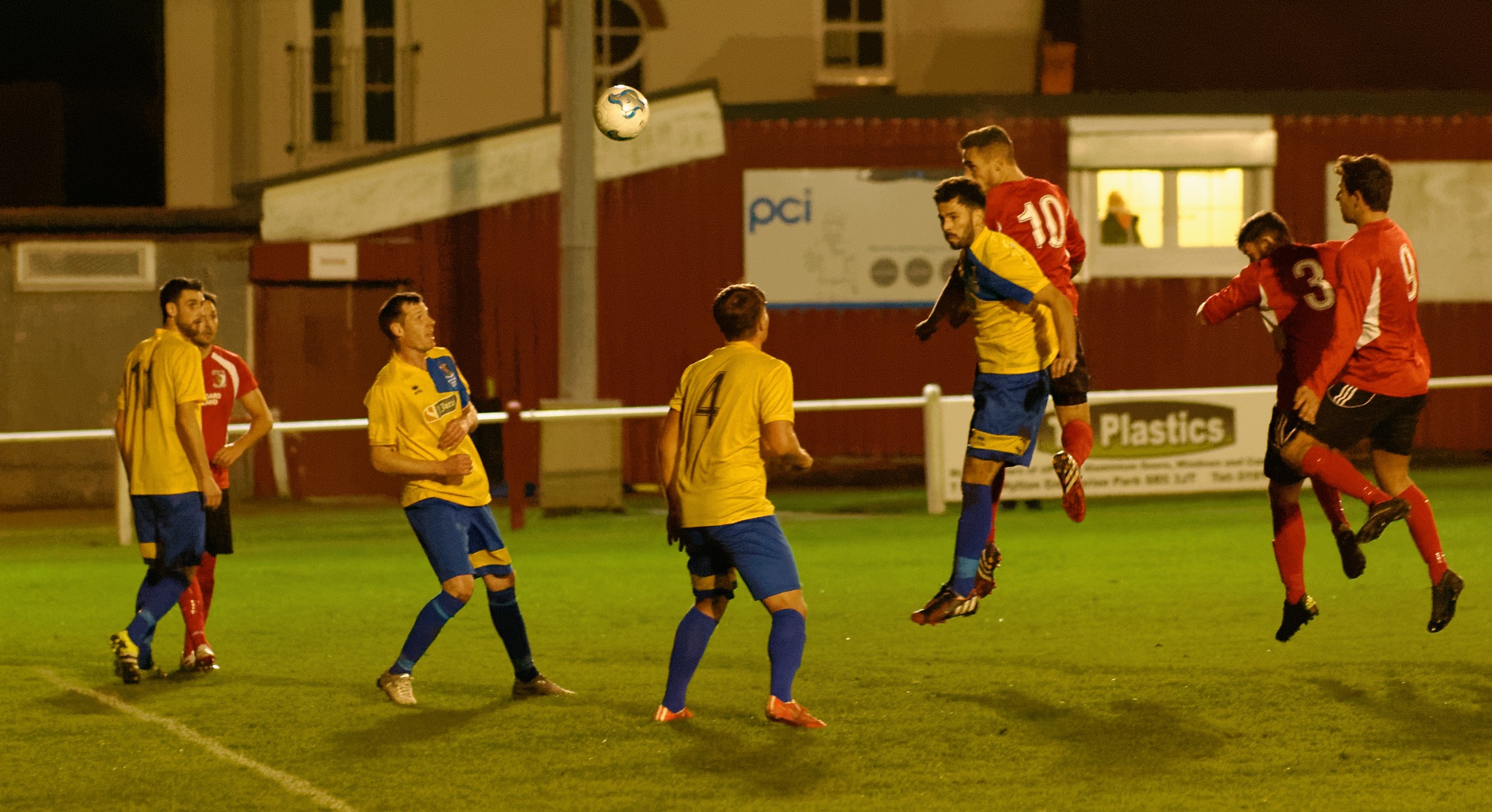 RCA entertained Ebac Northern League champions Marske United at Meadow Park in what was expected to be a keenly fought contest, Marske lying fifth in the league with only two defeats in 11 games and RCA on an eight game unbeaten run.

The management team recalled James Talbot into the starting eleven after his exploits in Ireland against the Ukraine, to replace Jordan Harkess who had work commitments. They also brought in Luke Richardson for the injured James Armstrong.

The game started at a very high tempo as straight from the kick off Marske created the first opening when a through ball from Gott found Mulligan inside the penalty area, but Talbot was able to make the save and his clearance caused confusion at the other end when Melvin controlled the ball before laying it off the Gordon. The ball spun away from him and Dean in the Marske goal needed two attempts to smother the ball before the RCA striker could get in a shot.

Within two minutes Mulligan raced onto another through ball and although his shot beat Talbot it was cleared off the line by Davis and cleared up field where Proctor picked up the loose ball and found Melvin on the edge of the box. He slipped past his marker and fired in a shot which Dean saved low down to his left.

Eight minutes gone and it could have been 2 – 2, both teams continued to push forward, but with little reward in the final third as the game settled into a midfield battle.

On 15 minutes a right wing corner for Marske was taken by Kelly and met by O’Sullivan, but his first time volley flew wide of the target. It wasn’t until the 30 minute the game sprang to life again and again it was Mulligan for Marske who created the chance. Kelly fed the ball to Gott who sent the ball forward to Mulligan who turned sharply and fired in a low shot which Talbot did well to turn round the post for a corner. Two minutes later and a flowing move by RCA saw them move the ball quickly from Davis to Noble then on to Callen who spotted the run of Melvin on the left. Melvin controlled the ball before crossing into the area for Callen, but Dean anticipated the cross and collected the ball just in front of the advancing striker.

RCA were starting to gain momentum kicking with the slope and only a great saving tackle prevented Gordon from getting in a shot after some good work by Melvin.

In the 37th minute RCA took the lead. A corner was awarded after a spell of pressure by RCA and Proctor took the kick sending it into the area where Callen rose head and shoulders above everyone else to power home a superb header. Callen had a great chance a minute later when Noble won the ball in midfield and played it between two defenders for Callen to run on to; he controlled the ball before firing past Dean, but his shot was well off target.

In the final minutes of the half the visitors gained some impetus and another Kelly corner was headed towards goal by Owens, but Davis was on hand again to clear off the line. The clearance fell to Gott who squared it back across the penalty area to Owens who drove a low shot through a crowded goalmouth, but Talbot was able to get a hand to the ball and palm it away for a corner.

At half time Scott was brought on to replace Callen and almost immediately the youngster forced a fine save from Dean. Within five minutes the Marske stopper was again in action, this time a corner was swung in by Proctor, Buchanan flicked a header to the back post where Melvin was waiting but his well struck shot was superbly saved by Dean. From the resulting corner Proctor sent the ball to the back post where Buchanan headed home only for the referee to disallow the goal for pushing.

Marske, who had been largely anonymous up to now in the second half, suddenly burst into life. A ball forward from Gott found Owens in on goal. His shot was brilliantly blocked by Talbot who then picked himself up and produced a stunning save from Kelly’s thunderbolt of a shot. RCA, unable to keep hold of the ball for any period, found themselves back peddling again a few minutes later as Riley advanced twenty yards before firing in a 30 yard effort which Talbot saved easily.

The visitors were exerting extreme pressure on the RCA back four and Marske should have equalised in the 65th minute when Riley played a lovely through ball to Mulligan who was through one-on-one with Talbot, but the young keeper pulled off yet another brilliant save throwing himself in the way of the shot. Butterworth was the next Marske player to try his luck but from 40 yards out and with the RCA keeper in this sort of form he was not really going to test him.

RCA were next to have a chance when Scott chased down a long ball and then put pressure on the Marske defence before dispossessing them and slipping the ball to Melvin, but the normally lethal striker fired over the bar. A minute later, at the other end, an attempted clearance by Gordon gave away a free kick on the edge of the box. Mulligan took the kick, smashing it against the bar and over for a goal kick.

The game was finally starting to show signs of slowing down as both teams tired. A few niggly fouls were punished with yellow cards, then in the 88th minute RCA were awarded a penalty when Davis was scythed to the floor after an amazing run which saw his go past at least four Marske defenders. The responsibility for the penalty fell to Noble who fired it low to the bottom right hand corner, but somehow Dean managed to get a hand to it and make a magnificent save to keep Marske’s hopes alive. Almost immediately at the other end a long hopeful ball into the penalty area is collected by Talbot who looked to be fouled as he dropped the ball and Brunskill stabbed the ball home, before the referee blew for an infringement.

The final five minutes of the game were played out with RCA trying to run down the clock and the Marske supporters proving that they can count to 17 every time young Talbot gets his hands on the ball.

This was another hard fought match between two very competitive teams. The game was played in the right spirit throughout and in the end the spoils went the way of the home team, increasing their undefeated run to nine. A special mention for the Marske supporters: they sang almost continuously from the start of the match right up to the final whistle and were a credit to the team.

We move back up to eighth in the league with this result. Not getting complacent, the manager is looking to strengthen the team with a number of quality signings shortly.