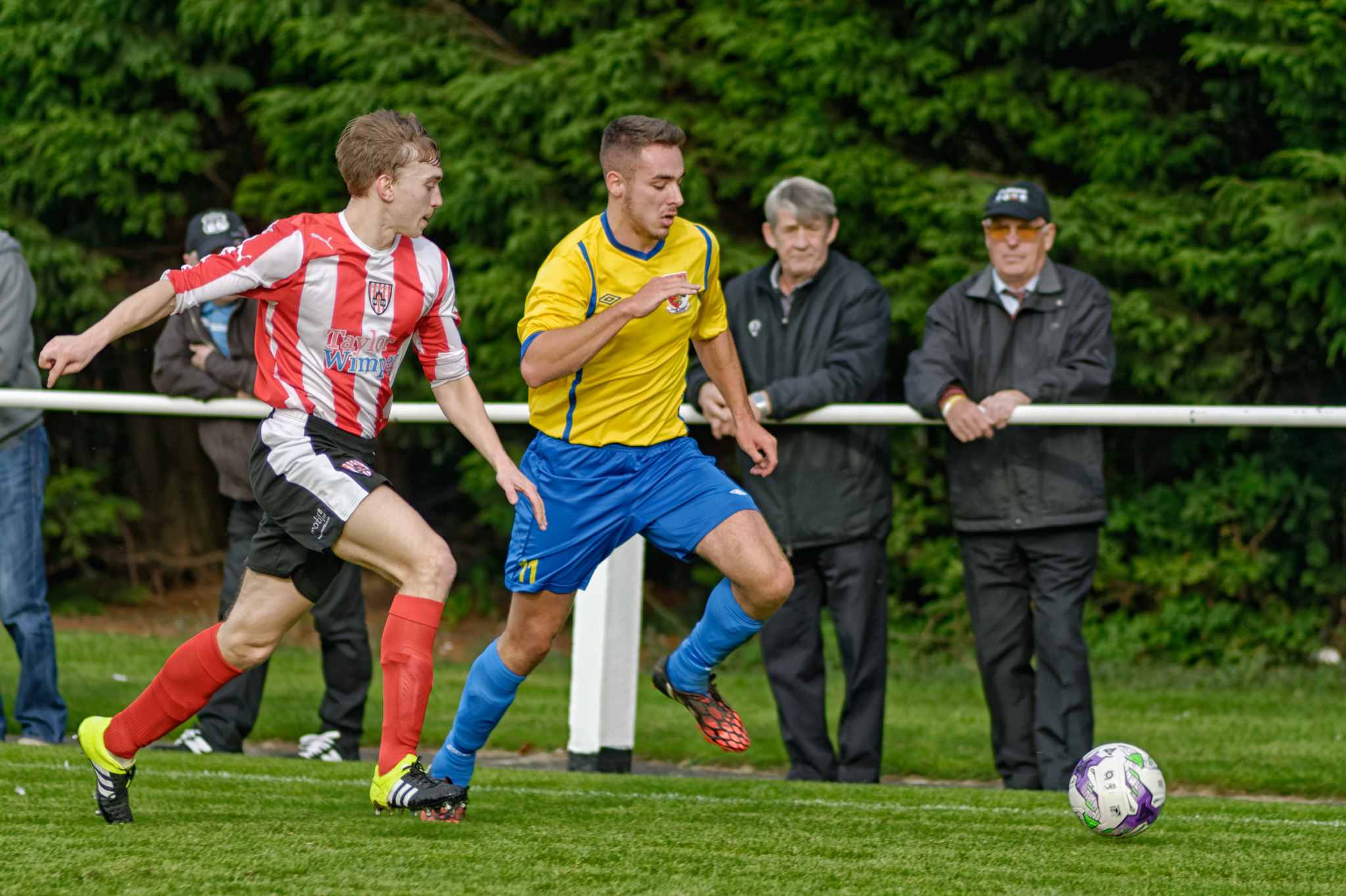 RCA's Stephen Callen on a trademark run down the wing. Photograph: Simon Mears.

RCA travelled to Guisborough Town with only 13 fit players and once again demonstrated that they are a team with great spirit.

Armstrong returned to left back and McNab was switched to centre back as the only change from the team that had played so well last in last weekends FA Vase match against Bridlington.

A quiet start to the game was rudely awakened in the seventh minute when Bythway scored his almost obligatary goal against us, firing in a 30 yard stunner which took a slight deflection on its way into the top right hand corner of the net.

In the 11th minute Melvin picked up the ball from a pass by Noble and fired in a 20 yard shot which was tipped over the bar by Liversedge.

With the game flowing from end to end both teams had chances which were squandered.

Guisborough carved out the next chance when Bythway crassed into the box to Earl but the striker headed over the bar.

Then, two minutes later, a great passage of play by Guisborough saw them stretch the RCA defence. Switching paly from the left to the right before the cross into the box was cut out by Davis.

RCA having come through that period unscathed went back on the attack and an exquisite ball from Noble into the path of Proctor should have been rewarded with an equaliser, but the final shot went wide.

A minute later and Buchanan headed a clearance up to Armstrong who sent the ball froward where Gordon headed the ball into the path of Charlton and it took a brilliant save from Liversedge to deny the RCA winger.

This was RCA's best spell of pressure as they forsed the "Priorymen" back on the defensive. Another great ball from Armstrong found Callen and he in turn swung the ball in to noble but his shot was well saved.

A minute later and it could have been all over for RCA when Bythway picked up a loose ball in midfield and played in Liddle, who from well inside the area, fired wide of the target.

Two minutes later and the injury crisis at RCA deepened when Armstrong limped out of the game with a recurrence of a hamstring injury.

In the 39th minute RCA equalised when substitute Hope sent in a curling cross into the heart of the penalty area and Callen, drifting in at the back post was able to chest the ball home.

On the stroke of half time Guisborough almost regained the lead when a rasping 30 yarder by Helm was excellently saved by Harkess.

The second half opened with the home team pressing forward and forcing RCA to defend deep. In the 50th minute a long ball forward was picked up by Earl who then played the ball to Liddle, he skipped past the challenge of one defender before powering in a shot which brought a tremendous save from Harkess.

Five minutes later and a RCA attack broke down on the left, helm picked up the ball and played it forward to Bythway but his shot was blocked by Buchanan and cleared up field.

RCA were being reduced to the odd breakaway while Guisborough for all their possession were being held at bay by some stout defending with Buchanan and McNab outstanding.

In the 62nd minute RCA had a let off when Liddle crossed the ball into the area, but Bythway couldn’t keep the ball down and his strong header went over the bar. Then Round tried his luck from long range shot also cleared the bar by some considerable margin.

On 67 minutes Guisborough retook the lead when Earl when he flicked a near post corner into the net.

This had the effect of galvanising the RCA team who went on the offensive and for the final 15 minutes of the game put massive pressure on the home team's defence.

A cross into the box by Davis was missed at the far post by Buchanan, but Carr following in met the ball with a header which had Liversedge scrambling to save.

The ball was quickly switched to the other end of the pitch where Earl was guilty of taking too long to get his shot away and Harkess was able to save comfortably.

As the game entered the final five minutes a great move by RCA saw Proctor switch play from the left picking out Callen who laid the ball off to Melvin who struck a great volley goalwards, but Liversedge was able to get a hand to it and palmed it over the bar.

RCA were pushing forward now looking for an equaliser and throwing caution to the wind and in the 87th minute their endeavours were rewarded when Davis found Proctor from a throw in and he crossed to Callen who played the ball in to Melvin who had time and space to pick his spot and he thundered in a shot which rocketed into the top corner from 25 yards out.

The remainder of the game was played out with no further chances for either team.

Once again this was a hard fought contest and we showed our resilience and team spirit. Twice behind against a team who are looking to be in the top three this season and we came back strongly.

There were some excellent performances in this match. Harkess made some great saves at important times. Buchanan and McNab were solid in the centre of defence. In midfield Proctor and Noble are developing a partnership which just needs a few tweaks and up front Melvin kept possession well and his finish was superb. We also have come to expect the high standards from Callen, Davis and Charlton who week in week out give 100%.

Hopefully Armstrong's injury will heal quickly and he will be back playing soon. Both Carr and Hope played their part when they came on as substitutes.

Another great team performance - apologies for the after match entertainment as the bus departed.