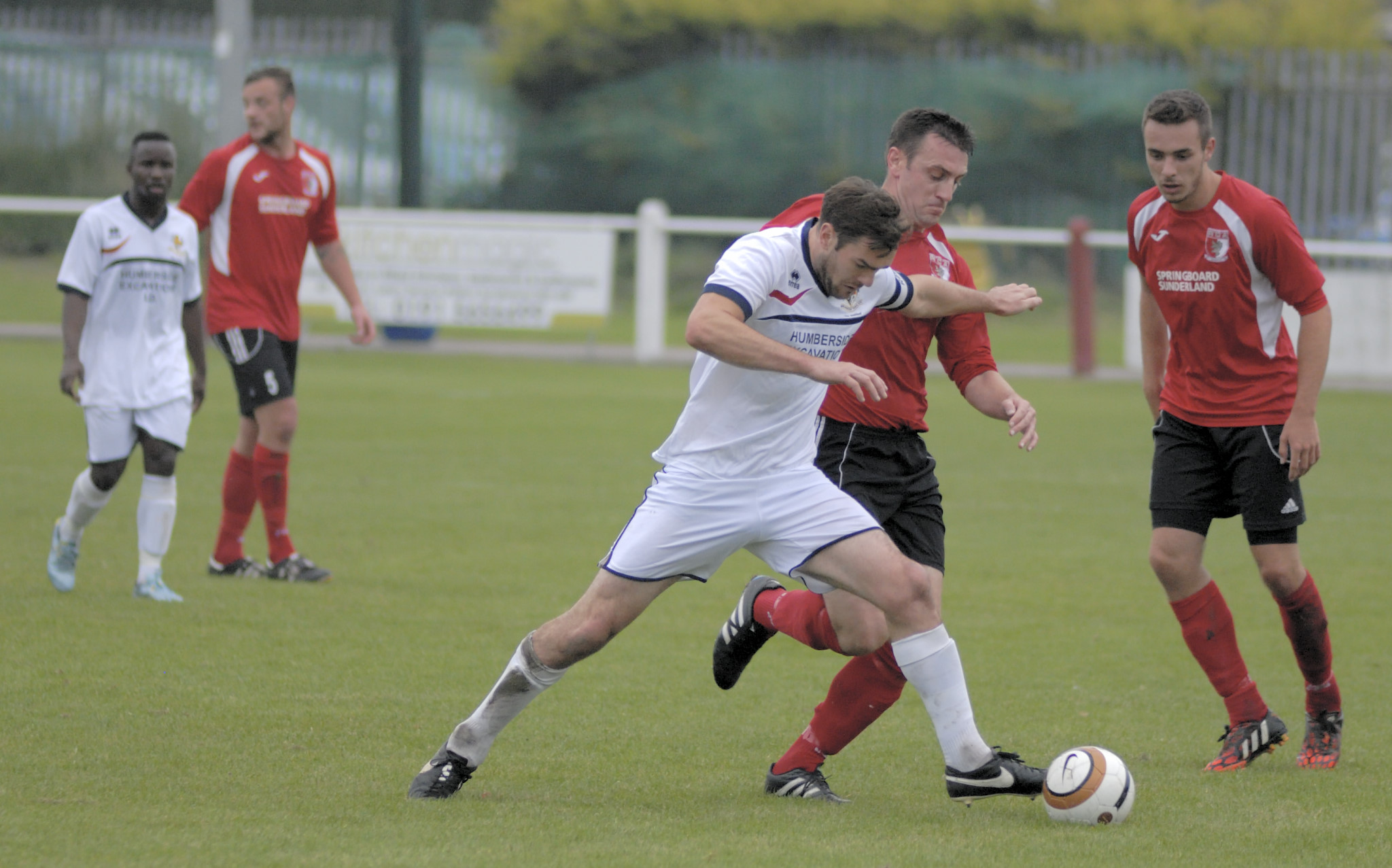 The visitors made one change from the team that lost in mid week to Worksop Town, bringing in Knaggs for Clarkson who was left on the bench.

The management team of RCA gave a late fitness test to Callum Hope, but a niggling groin injury meant he would take no part in the game which was pity after his Man of the Match performance against Norton and Stockton last week. So in came Callen to replace him as the only outfield change to the team. Harkess came in to replace the on-loan Talbot between the sticks. Returning from injury both Hatch and Armstrong were added to the substitute bench.

RCA were looking to continue their rich vein of form which has seen them lose only one game in the last six and that was a penalty shootout against last season’s Vase winners North Shields.

A dramatic start to the game saw the home team take the lead inside the opening two minutes. Davis, picking up the ball deep in his own half, played it forward to Melvin who in turn clipped the ball into the path of Charlton who rode the challenge of one defender before slipping the ball into the net past Hitchcock. The “Seasiders” were stung by this early set back and RCA almost doubled their lead when Callen went on a left wing run, cutting inside before crossing into the box and although Nicholls was able to head clear the ball fell to Noble on the edge of the box and he fired in a shot which Hitchcock saved.

With the advantage of the slope the “Seasiders” started to push forward looking for an early equaliser and Harkess had to be alert in the eighth minute when Sutton received the ball from Fleming before turning and shooting low. A minute later and a quick throw in to Ruhanduka saw him turn and run at the RCA defence before slipping the ball to Sutton who again tested Harkess with a raking drive, but the RCA keeper made a good save diving to his left.

RCA's next attack came from a throw in. Davis picked up the ball on the right and switched play with a delightful ball to Callen on the left wing. He controlled the ball before cutting inside the full back and drilling a low shot narrowly wide.

Bridlington got back into the game in the 14th minute when they were awarded a free kick on the left touchline, which was floated into the box where Buchanan connected with a strong header; unfortunately the clearance struck Sutton on the back and the ball fell to Fleming who stabbed home from close range. The home team reacted to this set back in the only way they know how and went on the attack. Melvin had a shot saved by Hitchcock and a minute later a good run by McNab saw his cross headed inches over the bar by Charlton.

Both teams were getting to grips with the opposition and there followed a period where they cancelled each other out and as the tackles started to fly in Noble was booked for persistent fouls.

It was not until the half hour mark that either team carved out a real opportunity and it was the visitors who created the chance when Waudby played a great ball into Fleming who laid it into the path of Ruhanduka, but the “Seasiders” striker’s shot was well saved by Harkess.

The match became scrappy with neither keeper being tested as the game headed toward half time. Both teams were guilty of misplaced passes inside the final third and the defences looked to be on top.

RCA should have retaken the lead early in the second half when McNab intercepted a through ball and played a 40 yard pass forward into the path of Melvin who slipped the ball forward to Gordon, but with only the keeper to beat he stabbed his shot wide of the upright.

The game was again starting to flow from end to end. With the advantage of the slope, RCA were pushing forward while Bridlington were looking to counter attack. The next attack from the home team saw Callen beat two players on the left before passing to Charlton who in turn played in Gordon, but his shot was punched clear by Hitchcock and Proctor blasted the follow up shot wide.

On the hour mark RCA introduced Hatch to replace Gordon and he was immediately called into action when RCA were awarded a free kick on the left. Callen took the kick and Hatch headed the ball into the path of Charlton who scuffed his shot wide of the post. RCA were piling on the pressure and the “Seasiders” were committing a lot of fouls to try and stem the tide. A free kick from Noble was picked up by Hatch, but his cross was headed away by Jenkinson with Callen in close attendance.

In the next attack Hatch was once again involved, holding the ball up on the edge of the box before laying it off the Proctor, but a Bridlington defender managed to get a block in and flew wide for a corner. Two minutes later and a long kick out by Harkess was headed on by Hatch and Proctor, with an audacious overhead kick, had his shot saved by Hitchcock.

Another RCA attack was halted when Charlton was fouled inside the area and the referee awarded penalty. With regular penalty taker Hope sidelined it was left to captain Davis to take responsibility. He fired in his shot, but Hitchcock made a truly magnificent save with his feet. This save gave the visitors a boost and they were straight on the attack through Ruhanduka who moved past two RCA players before shooting wide.

In the last minute of the 90 Hatch was again on the end of a long ball from Harkess and flicked it into the path of Proctor who tested Hitchcock again and again the keeper was equal to the effort.

So once again into extra time for the RCA team, they should be getting used to this.

The opening minutes saw the visitors looking to take advantage of the slope, but to no avail as they seemed to overplay the ball and the final pass was too long and easily dealt with by the RCA defence. In the 98th minute the home team took the lead when Callen played in Armstrong who produced a great cross which Hitchcock did brilliantly to palm away, however Hatch, drifting in at the back post, managed somehow to get a touch to the ball before volleying it into the net.

The visitors could only muster one effort in the opening half of extra time when Clarkson sent a long ball forward to Fleming but his shot lacked power.

The second half of extra time started explosively as the ball was played quickly forward by the visitors and finally into the path of Clarkson who despatched the ball into the corner of the net to tie the match at 2 – 2.

As the nerves started to show in both teams so did the tempers; a number of flare ups disrupted the game with the referee, Ms Welsh, left with no choice but to start handing out deserved cautions for various misdemeanours. With time running out and both teams tiring visibly, RCA were awarded a free kick on the edge of the area. Substitute Armstrong took responsibility for the kick and sent a magnificent kick into the top corner of the net with Hitchcock unable to get close to it. RCA were in the lead with eight minutes left and they closed everything down quickly allowing Bridlington little by way of chances in the final minutes. However Harkess was called upon twice to make brilliant point blank saves to keep the score at 3 -2.

We keep our unbeaten run going and await the draw for the next round of the competition. A great result: in a competitive game we showed once again what team spirit can achieve.

Next up an away trip to Guisborough Town next Saturday.

On a point of order, Bridlington being referred to, by Rob, as Seasiders led me to wonder which of the two teams' grounds is actually nearer to the sea? Answer, Meadow Park, by about 20 metres as the crow or seagull would fly. Henceforth, I shall refer to the CA also, as The Seasiders. On a football note, I am still drooling over James Armstrong's free kick.

In other news, West Didsbury & Chorlton saw off their Vase opponents Dinnington Town by the amazing score of 15-1. A big well done to Dinnington for even managing to score once in a match against two teams simultaneously! I refer to this result as there is a similarity between this game and the CA's game against Bridlington on Saturday. To stop people scratching their heads in confusion, I will say straightaway that the declared attendances at both fixtures was 84!

Draw for first round proper