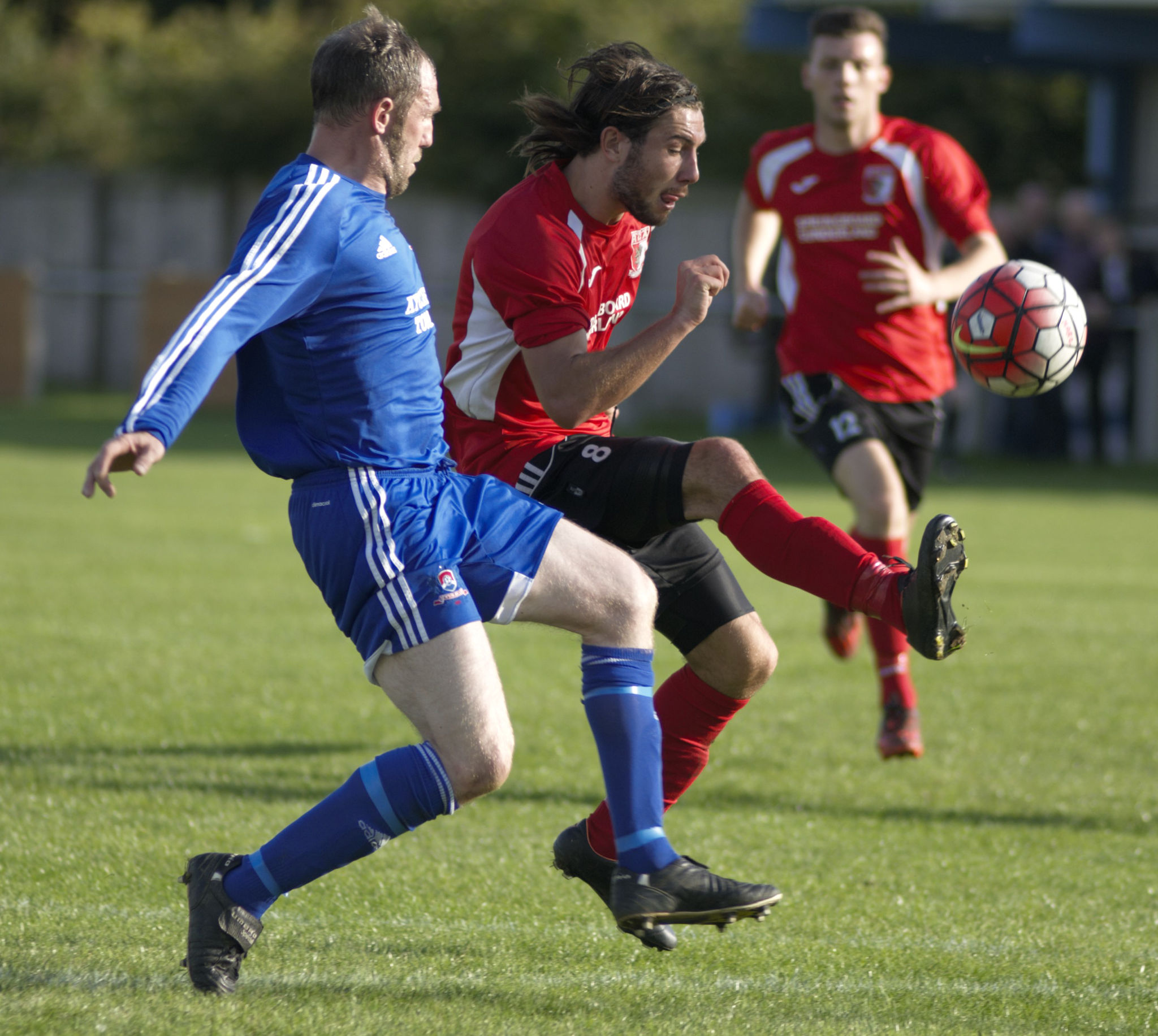 RCA's Luke Proctor gets control of the ball ahead of ex-RCA captain Brian Close.

Please click here for some match photos from Newton Aycliffe.

Due to holiday, injuries and work commitments, SRCA were down to the bare bones for today’s match against Newton Aycliffe. Further problems were added in the pre-match warm up when Hughes pulled up with a recurrence of his ankle injury.

The management team kept faith with the goalkeeper and back four which had performed so heroically on Wednesday night. Proctor came in for the injured Brown and Charlton and Hope replaced Callen and Carr respectively in a re-jigged midfield. This left a bench consisting of McNab, Harkess (GK) and the injured Hughes.

RCA kicked off and pressed forward on the left. The ball broke for Richardson and he played the ball forward to Charlton who controlled it before clipping it forward into the path of Hope, but the ball bobbled as he was about to shoot and his effort flew over the bar. Two minutes later RCA were awarded a freekick when Charlton was fouled. Hope took the kick curling it to the far post where Buchanan won the ball and headed it back toward Larkin, but Mitten cleared the danger.

Aycliffe were finding it difficult to retain possession as RCA put pressure on the ball. Proctor picked up a loose ball in the seventh minute and fed Larkin inside the area, but the RCA front man slid his shot wide of the post. In the 13th minute RCA deservedly took the lead when, from another Hope free kick, Larkin headed the ball forward and Buchanan, with his back to goal, turned and fired into the net from six yards out. It could so easily have been 2 - 0 two minutes later when from a throw in Larkin crossed to Charlton who laid the ball off to Proctor, but his curling shot was saved by Winter.

Aycliffe were stirred into action following this and a long ball forward saw Moffatt head the ball forward to Boagey, who fired in a low shot which was blocked by Buchanan; the rebound fell to Knight but his shot was cleared by Richardson. The visitors were immediately back on the attack and a flowing one touch build up saw Proctor pick out Hope who slipped the ball to Larkin; he chipped the ball round the corner to Charlton who curled his shot wide of the upright.

Aycliffe didn’t seem able to cope with the pace of Larkin and when he picked up the ball from a throw in on the right he again found acres of space to pick out a cross to Hope who chested the ball down to Proctor who thundered a low shot inches wide of the post. With 25 minutes gone Aycliffe eventually started to cause problem to the visitors. Boagey tried to find Moffatt with a deep cross, but Talbot came out to collect. Within a minute Aycliffe were back on the attack. Close picked out Garthwaite on the right and his cross to the left side of the penalty area was collected by Moffatt who sent in a great ball to Knight who scooped his shot over the bar.

On the half hour mark Aycliffe were awarded a free kick on the right. Knight, in an attempt to catch the keeper out, smashed a shot at goal from an acute angle, but Talbot reacted quickly and palmed the ball over the bar. The pressure was now mounting on the RCA defence as Aycliffe went looking for the equaliser. RCA were reduced to hitting the home team on the break and it almost came off when a long punt forward was picked up by Gordon who lashed a cross shot which was blocked by Mitten and his ball out of defence fell to Moffatt inside the RCA area, but Drysdale managed to produce a superb tackle to deny the Aycliffe striker a shot on goal.

As the half came to a close Talbot was once again tested from a Knight free kick, but was able to palm it away for a corner.

Both teams were back on the pitch early for the second period eager to get on with the game. It was a more determined Aycliffe team who started the second half on the front foot and with only three minutes of the half gone they had a great chance to equalise when Garthwaite found Knight with an inch perfect pass, but the Aycliffe striker’s shot drifted across the face of goal and out for a goal kick. In the next few minutes RCA tried valiantly to respond to the threat posed by Aycliffe.

In the 55th minute another through ball from Garthwaite was meant for Moffatt, but Talbot, reading the danger, charged out of his goal and in an attempt to clear the ball he collided with the Aycliffe forward. Talbot was booked and Knight fired the resulting free kick over the bar.

RCA got back into attacking ways when Noble sent a beautifully weighted ball through to Larkin who elected to square the ball rather than shoot and Kitchen was able to clear under pressure from Hope. Within minutes they were back again and unlucky not to double their lead when Richardson played the ball forward to Charlton, he gave the ball to Proctor who slipped the ball inside the full back for Charlton whose cross was met by Hope, but he scuffed his shot into the arms of Winter. From the goal kick the ball was headed away by Buchanan, but was chested down by Patterson on the half way line. He was allowed to make a 15 yard run forward before unleashing a terrific shot which had Talbot at full stretch to fingertip round the post for a corner.

Although Aycliffe where applying a lot of pressure they were being reduced to long range efforts and weren’t creating any clear cut chances. By contrast, RCA were creating some good chances in front of goal. In the 65th minute RCA were awarded a corner after a speculative through ball from Richardson was sliced behind by Kitchen. Hope took the kick and found Drysdale free inside the six yard box, but his header was collected by Winter.

Another injury blow struck RCA with Larkin needing to go of with a recurrence of the hamstring injury which has plagued him all season. Substitute McNab’s first contribution to the game was to play a one-two with Charlton before crossing into the area where Hope connected well with the cross, but the ball flew straight into the arms of Winter.

Aycliffe should have equalised with five minutes to go when Harrison was allowed time and space on the right to send in a wicked looking cross which fell to Gibson, but he completely mishit his shot and it trickled wide. The home team threw caution to the wind in an attempt to get an equaliser and were rewarded in injury time when Close was left unmarked eight yards out and the ex-RCA player and captain fired the ball into the net.

Once again RCA can be proud of their performance today. They fought for every ball and made it difficult for their opponents. What ultimately decided this match was the strength in depth of the two teams. Aycliffe were able to send on fresh legs at the end of the game while we were struggling. However there were loads of positives to take from today’s game not least the team spirit.

Our next match is North Shields in the League Cup on Tuesday. We never seem to get easy games in this competition, but we have beaten them once so why not again. For those supporters who will be duffing the Capital One cup match up the road at the Stadium of Light, why not come and support your local team you may be pleasantly surprised.