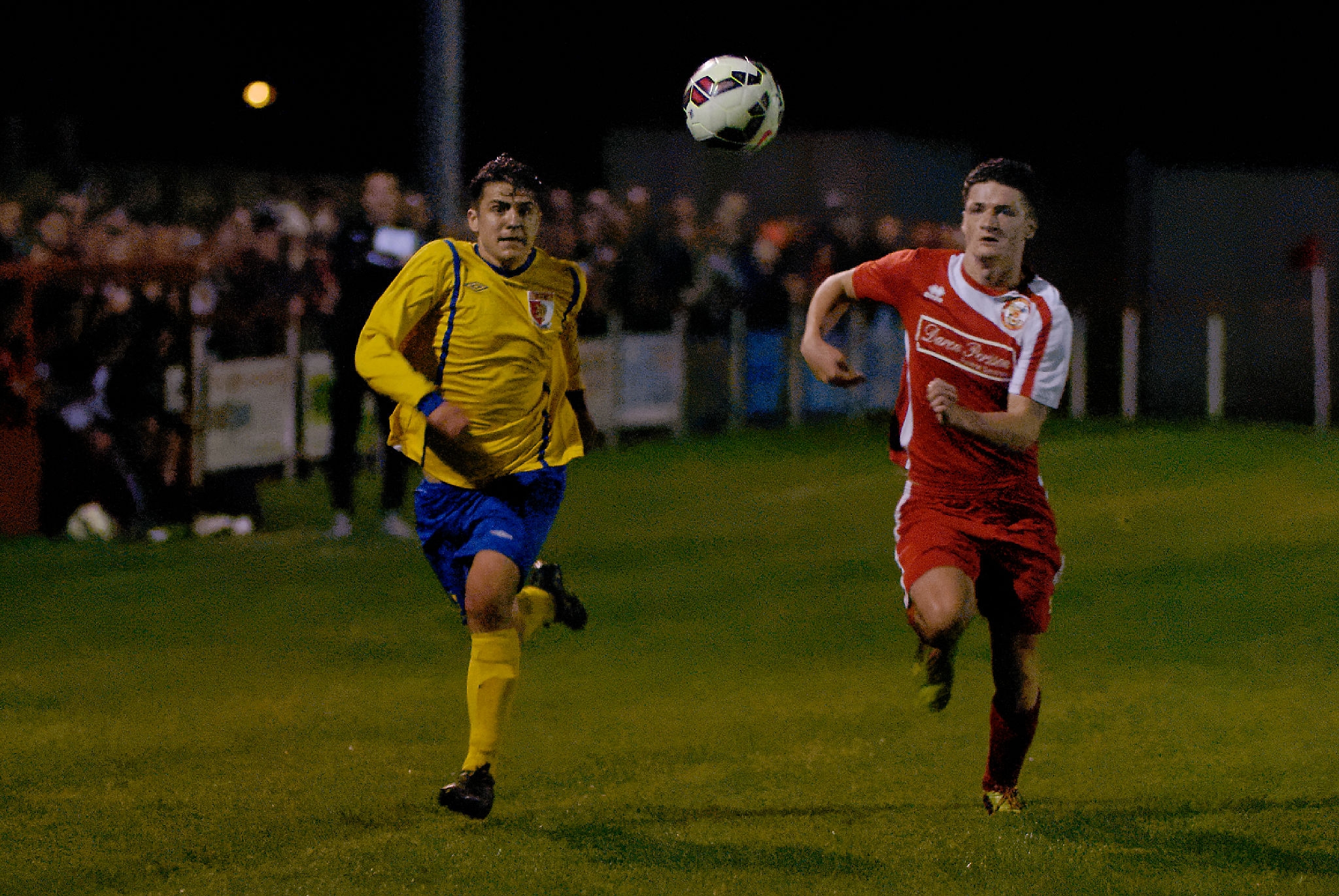 Please click here for more photos of the match.

RCA’s recent visits to the Daren Persson Stadium have resulted in defeats despite playing well, for tonight’s encounter with the FA Vase holders the management team brought in James Talbot, an on loan goalkeeper, signed from Sunderland AFC. Also added to the line-up were Luke Richardson and Jonathan Carr. Ex Sunderland player Cliff Byrne was also on the bench.

The opening exchanges saw both teams testing each other out with long balls to the wingmen, in the fourth minute a ball from Parker found Luccock on the right, he cut the ball back to McGorrigan who turned and fired in a shot which Talbot saved fairly comfortably.

A few minutes later and a slick move between Davis and Carr saw the ball curled into the box where Bannon punched clear with Callen and Gordon waiting to pounce.

As the game flowed back to the other end Luccock was once again instrumental in setting up the Robins next chance when he slipped past two defenders before crossing into the box where Pounder shot wide when in a good position.

RCA took the lead in the ninth minute when Gordon took a throw deep in the oppositions half, Callen played the ball to Richardson who fed an exquisite through ball to Larkin and he dropped the ball off to Callen who curled in a shot from 25 yards which beat the keeper and nestled in the back of the net.

The Robins were almost level in the 13th minute when Parker sent a ball forward to Luccock who jinxed inside before firing across the face of goal and away for a goal kick.

Carr then picked up a Davis through ball before returning it to his captain who threaded a ball into the penalty area for Larkin to chase he picked up the ball and almost scored with an audacious chip which drifted wide of the far post.

The Robins were finding it difficult to get out of their own half as RCA pressed forward and when Larkin won the ball 30 yards out he quickly released Carr on the right and the youngster fired in a shot which Bannon did well to hold.

In a rare breakaway Hughes placed a great ball through to Pounder who dribbled past two defenders before clipping in a cross which evaded Talbot and had to be headed away by Buchanan.

The game was hotting up now as the crowd started to get on the backs of the home team and the manager was urging them forward, in the 25 minute after a spell of pressure from RCA the ball was cleared up field to Luccock who slipped the ball inside to McGorrigan , he returned the ball to the winger who shot over the bar.

RCA then had two good efforts on goal when a good ball into the box was cleared by Hughes it fell to Brown who fired in a long range effort just over the bar. From a poor goal kick Richardson won the ball and played in Callen but his shot was blocked by Parker and the rebound was rifled wide by Brown.

On the half hour the home team seemed to get a little momentum and McGorrigan had two great chances to equalise but on both occassions he scuffed his shots wide of the far post.

Then in the 34th minute North Shields were awarded a penalty for a foul in the box, up stepped Richardson to drill a low shot to his right but Talbot managed to pull off a magnificent save at the foot of the post and the rebound was cleared by Drysdale.

With 10 minutes left in the half the game became bogged down in a midfield battle with neither team getting the upper hand.

The next real chance of the half fell to the home team when Richardson took a quick freekick to McGorrigan and it was only the quick thinking of Noble that prevented an equaliser as he raced back to block the cross with Luccock waiting inside the six yard box.

The second half opened with a quick attack by RCA as they tried to force the home team onto the back foot, Richardson and Callen combined on the left to set up Gorden who curled a shot narrowly wide of the far post.

The Robins picked up the pace of the game and started to take the game to the visitors, a long ball forward from Hughes was controlled by Pounder who dribbled into the box before unleashing a terrific drive which Talbot did well to parry away for a corner.

Talbot then punched the resulting corner kick out as far as Wilson who fired in a shot which went wide.

RCA were under real pressure at this point and it was a relief when Brown found Larkin on the right to relieve the bombardment, Larkin ran at the home defence before crossing to the near post where Callen managed to get a foot to the ball but could only stab it wide.

Once again the Robins started to get on top with wave after wave of attacks being repelled by a well organised defence and when the defence was breached Talbot was on hand to tidy up. However the ineveitable threat of a goal materialised in the 60 minute after some good play by Luccock he dribbled across the box before he squared the ball to the edge of the area where Wilson was on hand to smash the ball past the helpless Talbot and into the net.

The RCA keeper was called into action 5 minutes later to save from Richardson as the visitors defence started to show signs of tiredness.

In the 70th minute of the game an innocuous collision on the halfway line left RCA’s Andrew Brown suffering with a serious injury which required treatment and an ambulance was called for.

RCA brought on Proctor to replace the stricken Brown and were quickly on the attack with Davis breaking down the right before crossing into the box but Parker managed to clear up field.

As the game entered the final 5 minutes both teams pushed forward looking for a winner and in the end it fell to Larkin to unlock the Robin’s defence with a run and cross which was flicked into the path of substitute Proctor who managed to squeezed the ball into the net through a crowd of players to clinch a dramatic victory for the visitors.

This was an excellent team performance from 1 through to 14 everyone contributed to get these three points against a very good North Shields team.

The introduction of youngsters Talbot and Carr was a baptism of fire but both came through the game with high praise from the management team.

The game was marred by the injury to Andrew Brown after he collided with the perimeter fencing. The latest information is that, thankfully, there are no breaks and that although still in pain he has been discharged from hospital with severe bruising to his side and back. We all wish him a speedy recovery and we would also like to thank the North Shields supporter who stayed with us until the ambulance arrived, (90 minutes). I hope the interview went well today.

Video highlights of the game are now available to view on NSFCTV at https://www.youtube.com/watch?v=0FnfXwmYUEw&feature=youtu.be