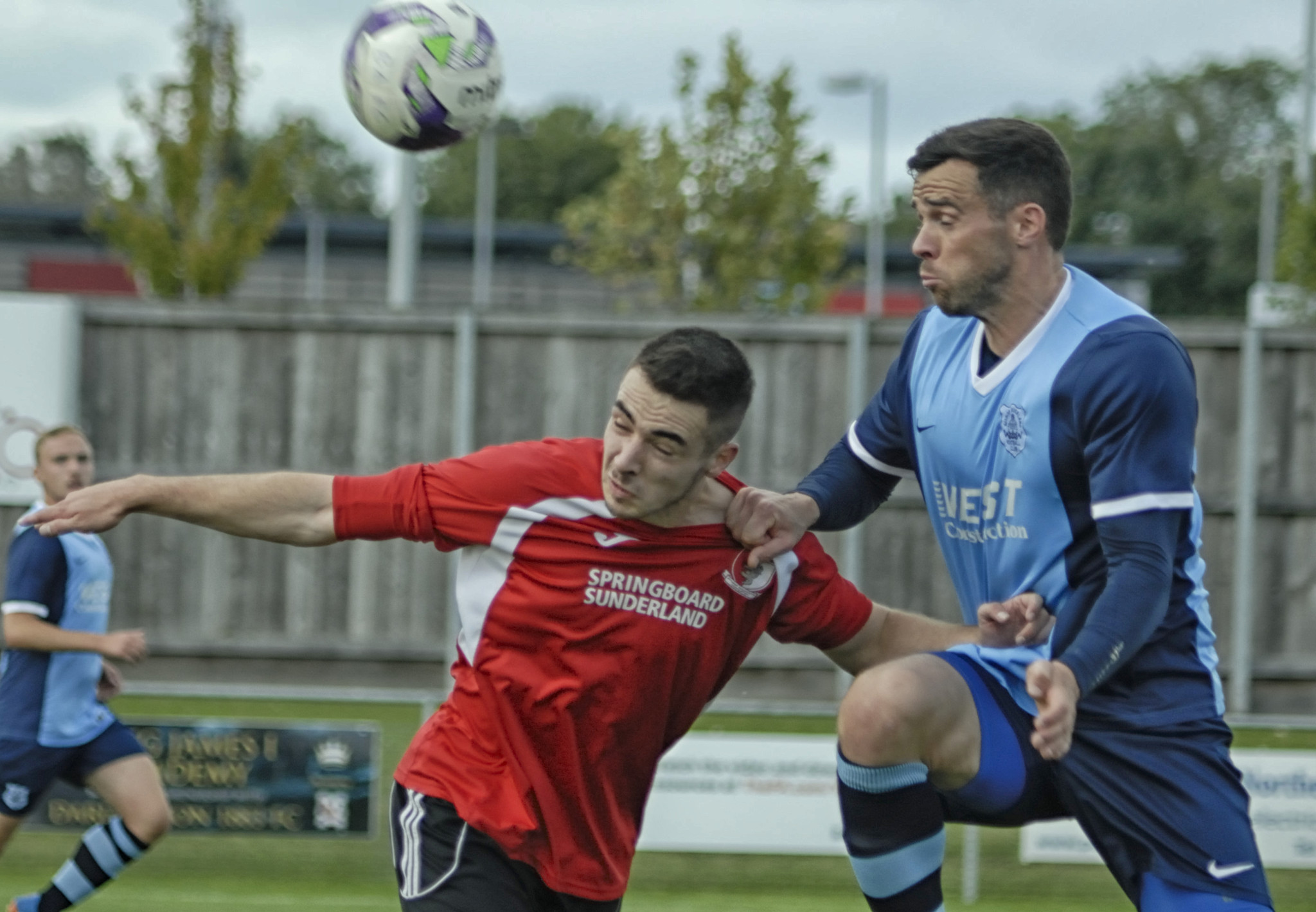 After the excellent performance on Monday against Seaham Red Star the management team named the same eleven to start against a Bishop Auckland team which have had a slow start to the season but who had recently beaten Shildon.

The early pressure in the game came from RCA as they maintained possession and looked to press forward at every opportunity, in the fifth minute they were awarded a corner through the persistence of Davis, Hope took the kick which he curled into the box and onto the head of Armstrong but his header flew harmlessly over the bar.

In their next attack RCA were awarded a freekick when Proctor was fouled, Hope played the ball into the penalty area to Buchanan who looked to be pulled to the ground as he shot and the ball flew into the arms of Jobling and his quick thinking resulted in Bishops taking the lead. He fired a long ball down the middle of the park and although the ball was headed away it fell to Hotchkiss who played the ball forward to Johnson who outpaced the RCA defenders, picked up the ball and fired in a low controlled shot past Harkess.

RCA continued with their passing football and almost equalised in the 11 minute when Proctor foung Hope on the left, he sent a lovely crossfield pass to Davis on the opposite wing where he controlled it before crossing in to Callen, he held the ball up before laying it off to to hope but his shot was well saved by Jobling.

Three minutes later it was the turn of Armstrong to supply a long ball from the left wing over to the right wing where Davis controlled the ball well cut inside his marker before sending a curling shot wide of the far post.

Bishops steadied the ship with Hotchkiss taking control of the midfield battle and starting to play some great balls forward toward Johnson and Palmer who where well marshalled initially by Buchanan and Drysdale.

However as the half wore on Bishops gained in confidence and in the 21 minute they doubled their lead when another long punt forward by Purewal was collected by Johnson before playing in Palmer who fired into the net.

From being under pressure to 2 -0 up and everything was going Bishops way. They had found a way of playing against the RCA defence and they exploited it to the full as they launched long balls down the middle and although they were defended well the loose balls all too often fell to Hotchkiss or Palmer and they would set up another attack.

Johnson was finding a lot of room up front and two occasions stung the hands of Harkess with rasping volleys.

On the half hour they could easily have gone 3-0 up when a Freekick taken by Lane was headed back across goal by Nichols into the path of Johnson but he headed over the bar. Three minutes later and the same player headed another cross from the right over the bar.

In the 40th minute Palmer picked up the ball 40 yards out took two srides forward before unleashing a terrific shot which hit the crossbar.

The only respite for RCA was late in the half when a Brown freekick found Callen in space but the RCA strikers shot was well saved by Jobling.

RCA made changes at half time bringing on Carr and Charlton and like the first half they started like a house on fire, with his first touch of the game Charlton sent in a great cross which was laid off by Callen into the path of Davis but Jobling was again on hand to save from the RCA winger.

Within a minute RCA were back on the attack this time Carr picked up the ball on the right before delivering a cross into the area for Davis but his shot was smothered by Jobling.

The game had sprung to life again and a shot from Johnson was saved by Harkess and then he was called into action again to save from a freekick by Hotchkiss.

As the game ebbed and flowed it was obvious that the next goal would decide the game and in the 61 minute, after RCA had again been denied as penalty appeal for a blatant push by Purewal on Callen, it was Bishops who provided it when another long ball forward was picked up by Johnson and he once again showed how clinical he can be by firing past Harkess into the net.

This was another body blow to the RCA team and they looked deflated at this point. It took another 10 minutes for them to have another attempt on goal when Proctor clipped a ball out to Carr who played the ball square to Davis but he curled his shot wide of the post.

The introduction of Coe for Proctor almost had an immediate effect as he slipped past his marker before chipping a cross into the six yard area where Callen rose above the bishop defence but headed over the bar.

Back came Bishops and when Harkess mishandled on the edge of the area there was a sense of deja-vu but Palmer fired wide under pressure from Drysdale. The RCA keeper was called upon a few minutes later, pulling off a point blank save from Johnson.

RCA got a little reward in the 89th minute when Davis crossed into the box and this time Callen headed into the net past the despairing dive of Jobling. Unfortunately Bishops went straight up the other end and scored, Palmer deftly chipping the ball over the advancing Harkess and into the net.

As performances go this did not rank alongside the best for RCA they showed plenty of endeavour going forward but to many times were caught out with what looked like simple balls through the middle. I think we will just have to put this one down to experience, we set the standard against Red Star and came nowhere near that level of performance against Bishops.