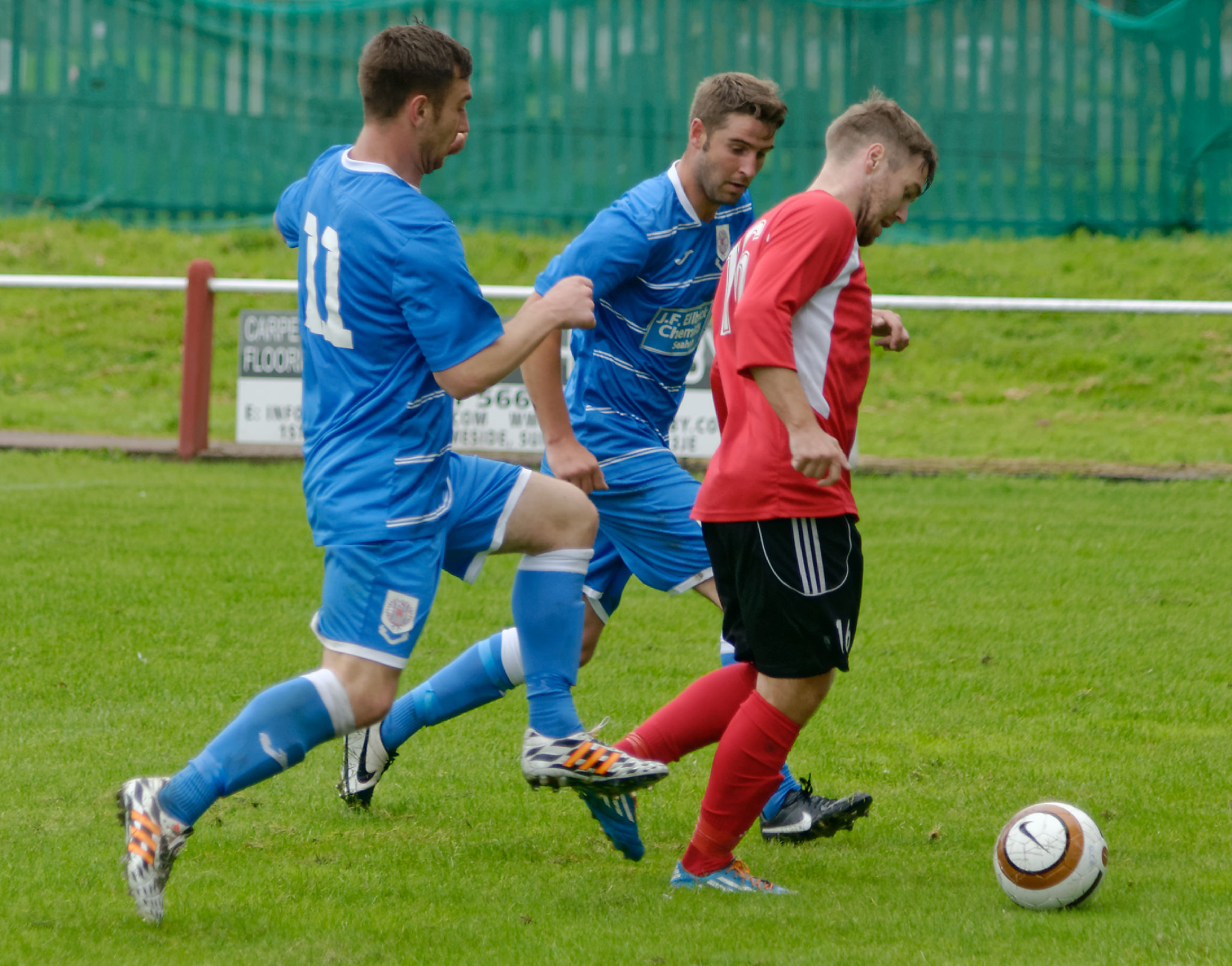 Michael Charlton takes evasive action as he is tracked by two Seaham Red Star players in the second half of the match.

The last time these two teams met in the league was on a cold Wednesday night on 26 January 2010; on that occasion a certain Liam McBryde came on as a sub for RCA and scored the winning goal in the 80th minute, today he lined up on the opposition's bench maybe looking to repeat the feat for Red Star.

RCA once again made three changes to the team who suffered defeat on Saturday in a 10 goal thriller against Shildon. In came Harkess to replace Morris in goal, Brown and Drysdale returned to the team in place of the injured Hatch and Hughes.

For the first time this season RCA had the advantage of the slope in the first half, not that it matters as the majority of the goals scored at Meadow Park have been scored kicking up the slope.

The opening 10 minutes of the game were very quiet given that it was a local derby. Both teams were looking to cancel each other out and this meant long periods of seeing the ball shifted from end to end, but with no final product.

In the 12th minute Seaham opened up the RCA defence for the first time when Kerr picked up a loose pass in midfield and sent a great ball forward into the patch of Bird, but the diminutive winger’s shot was well saved by Harkess.

For all their possession and pressure RCA could not produce anything by way of a shot at goal and it was left to Seaham to create the next opening. A long ball out of defence caught the RCA defenders flatfooted and forced an error from Harkess who was adjudged to have handled outside the area. Kerr stepped up, but fired the free kick wide.

With 25 minutes gone RCA started to get a grip of the game pushed SRS deeper into their own half. Callen won a corner on the right and from Hope’s kick Armstrong headed over the bar.

Two minutes later and Brown played a ball out wide which found Noble in space on the right wing. He played a low ball into Davis who slipped his marker but fired over the bar.

As the game progressed RCA started to push Seaham back and in the 33rd minute Noble sent a long ball forward and as it dropped between Scorer and Newbrook, Callen nipped in and got a foot to the ball, but could only direct it wide of the post. In Seaham’s next attack they almost took the lead when Kerr played a long ball forward to Gardiner who flicked the ball into the path of Andrews, but Brown threw himself across the ball to block the shot and the ball went for a corner.

The resulting corner was partially cleared by Drysdale, but fell invitingly for Kerr who drove a ferocious drive wide of the upright.

As the half neared its conclusion it was fair to say that it had been an uneventful first half with little for either keeper to do.

RCA made a change at half time bringing on Charlton for Davis and the substitute made an immediate impact from the kick off. Winning the ball on the right he made his way into the box where he was fouled and the referee awarded a penalty. Hope strode up to take the penalty sending Newbrook the wrong way.

That certainly livened the game up and immediately Seaham went on the attack with Andrews bursting forward only to be fouled outside the area. Gardner took responsibility for the kick, but fired it well over the bar.

A good move between Callen and Armstrong on the left released Hope who squared the ball to Proctor, but he shot wide of the target. RCA were looking to capitalise on their earlier pressure and only some terrific defending by Scorer prevented Drysdale from scoring from a Hope freekick.

Red Star were not to be outdone and started to build up a head of steam, throwing men forward in an attempt to get an equaliser. Bird was causing problems with his mazy runs and Andrews was always a threat in the box. However when the going got heavy Drysdale and Buchanan were able to match them and kept the threat at bay.

However after Charlton had made room for a shot which was well saved by Newbrook the Red Star keeper sent the ball forward for Andrew who headed back into the path of Kerr but he shot wide.

In the 75th minute Bird had the easiest chance of the game when a through ball from Gardner was dropped by Harkess and fell into the path of Bird, but with an empty net in front of him he stabbed the ball wide.

Within minutes Kerr picked up another loose ball in midfield and unleashed a terrific dipping shot which went wide of the goal.

RCA doubled their lead in the 79th minute when a a cross into the box was headed away for a corner by Thorp. Hope took the corner swinging it into the box where Scorer mis-headed the ball into his own under pressure from Stephen Callen.

RCA saw out the final 10 minutes of the game with no real scares.

Before the match we asked the management team to tighten up the defence and this was done really well. Right across the back four there was performances of the highest standard, in midfield we looked solid in the middle and out wide we were a continual threat, while up front Callen and Proctor harried and chased every ball. The bench looked strong as well with Charlton coming on to good effect.

We have set the level of performance now and need to maintain or better it in the future if we do who knows you might even get a smile from the committee.

Unfortunately we have an injury crisis at the club: Rob has an ankle injury, and will be unable to play on Saturday, while Dave, John and Defty are all doubtful with back injuries from carrying the team all season. Only Owen is fit and he’s away on a walking holiday. Never mind with what we have left we should be able to turn out a decent team and give Bishop a run for their money.