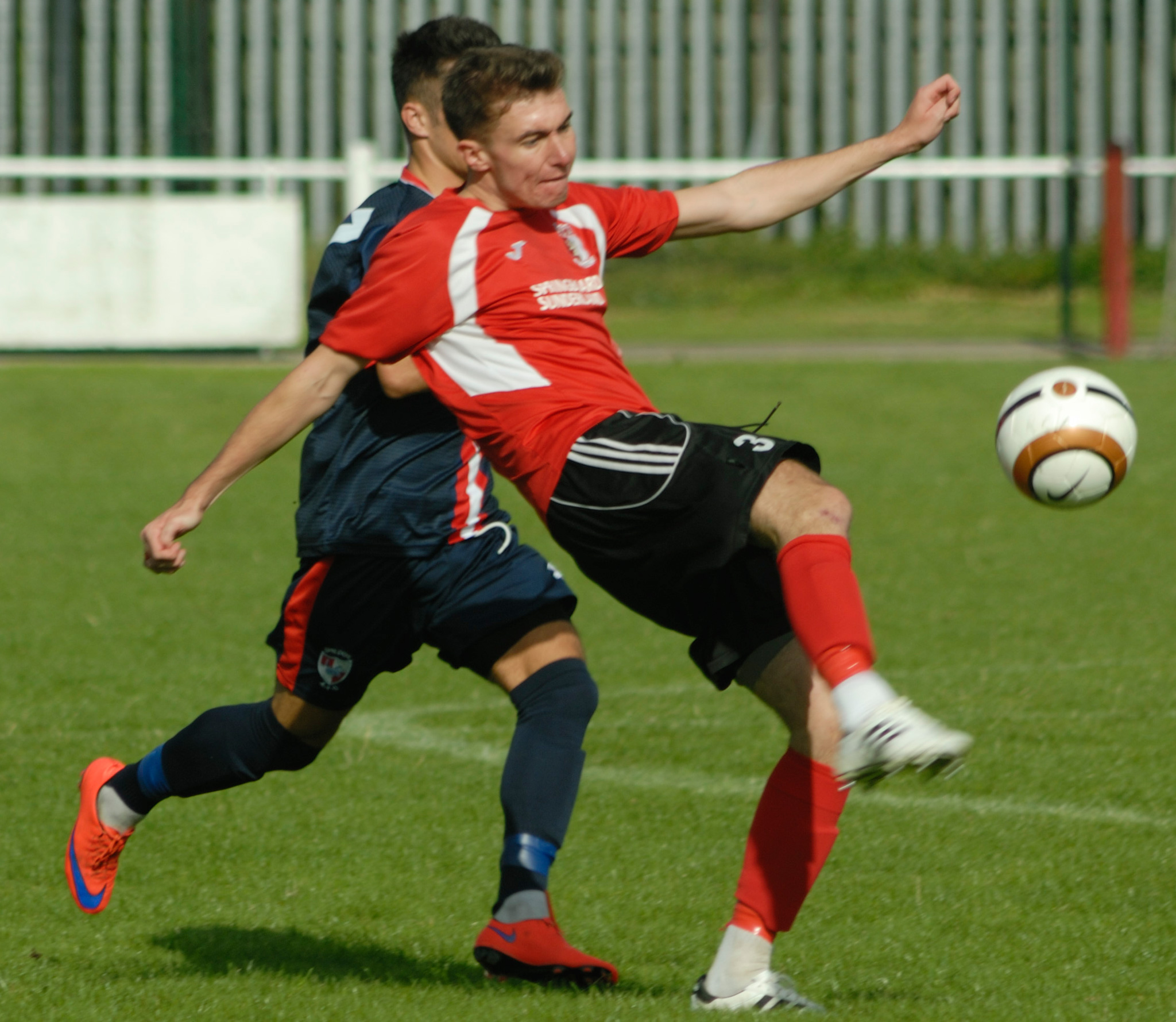 The visitors to Meadow Park today were table topping Shildon boasting an unbeaten League record and without conceeding a goal in the process.

RCA made three changes to the team who won at West Allotment Celtic on Wednesday. Hatch came in at centre half for Byrne, Jury returned replacing Brown and Hughes was preferred to Ryan Noble up front as RCA reverted to a 4-4-2 formation.

The opening ten minutes of the game were very quiet with both teams cancelling each other out and neither team testing the respective keepers. However the game was being played at quite a high tempo with RCA denying the Shildon players time and space on the ball by pressing high up the pitch.

RCA started to play some good probing football with both wingers causing problems for the Shildon defence and in the 15th minute RCA took the lead with a well worked goal. Hatch played a pass forward to Callen who turned his marker before slipping the ball to Hughes; he rode the tackle of the defender before slotting the ball into the bottom corner of the goal.

Two minutes later and it was almost 2-0. Davis picked up a loose ball and  played the ball to Noble who crossed the ball into the area where Callen headed wide of the post.

It was all RCA as they attacked at will causing Shildon to defend in numbers and it was no surprise when they did go  2-0 in the 20th minute. RCA were awarded a corner which was sent to the far post, Hatch headed back into the danger area where it was headed away by Brown, but the ball fell to Hughes who calmly chipped the ball back into the area for Callen to head home.

With RCA looking fairly comfortable the visitors tried to regroup but the persistence of the the home team players was knocking them out of the stride.

Then in a mad five minute period RCA lost all composure and discipline. A rash challenge on the half way line brought the first booking of the game and the freekick into the area looked to be easily held by Morris, but somehow it bobbled free from his grasp and fell to Connor who tapped home into an empty net.

This turned the tide in Shildon's favour and they piled forward looking for an early equaliser. A dribble and shot from Fryatt was well saved by Morris and then in the 35th minute a cross into the box by Fryatt was palmed away by Morris and fell to Donniger who hit a sweet low shot into the bottom corner of the net.

What a transformation in both teams, Shildon couldn't do anything wrong as the swarmed forward and RCA after being well in control were suddenly chasing the game.

As half time approached Fryatt once again went on a mazy dribble across the pitch before slipping the ball to Gruelich-Smith, but he shot wide and in the final minute of the half Donniger picked up a loose ball on the edge of the area but could only watch as his effort drifted wide of the upright.

Shildon came out for the second half a minute before RCA had left the dressing room or so it seemed as from the kick off the ball was switched to Connor who sent in a cross which was met by Donniger whose header hit the underside of the bar before entering the net.

From RCA's kick off Shildon won the ball back and again the ball was sent out to the right wing where Connor once again produced a great Cross and this time it was Gruelich-Smith who applied the finishing touch.

RCA had gone from 2-0 up to 4-2 down and their disciplined approach to the first 25 minutes had well and truly gone out of the window. In the next ten minutes they could quite easily have been reduced to nine men with the referee allowing a number of poor challenges to go unpunished.

However a slim lifeline was thrown to them when a ball forward found Davis in space and the RCA winger made no mistake bring the score back to 4-3.

There followed a spell of intense pressure from RCA, but Shildon's resilient and no nonsense approach to defending saw them through this period and in the 75th minute they extended their lead when Fryatt once again dribbled his way across the pitch, but this time he unleashed a low shot which crept inside the post.

Two minutes later and Shildon looked to have wrapped things up when Donniger picked up the ball on the left, and with the RCA defence backing off, he sent a great ball to the far post where Gruelich-Smith was on hand to head home.

There was still 15 minutes of this pulsating match to go and the players could be forgiven for tiring. RCA never gave up and in the 85th minute were awarded a penalty when Brown was adjudged to have pushed over an RCA player. Proctor stepped up and proceeded to fire the ball high over the bar.

This should have been game over, but the good thing about this RCA team is that they never stop trying and in the final minute of the game a good run by Davis ended with him feeding the ball to Reece Noble who crossed into the box where Charlton was on hand to stab home from close range.

This was a game of 'if onlys.' If only Callen's header had gone in we would have been 3-0 up, if only Morris had kept hold of the ball at 2-0 up, if only we had started the second half a bit better, if only the penalty had gone in and if only the referee had been able to see some of the incidents that everyone else in the ground saw.

However that is why football is such a good sport to watch everyone has their own opinion of the game.

We could learn a lot from this game not least how, even at 2-0 down, Shildon kept their composure while we seemed to lose ours.

Honestly, we are so exciting to watch going forward and we will always score goals. The downside, of the Kevin Keegan approach to football, is that you forsake defensive duties in order to push forward. If we could find the formulae to give us both there isn't a team in the league who could live with us.

On the discipline side we need to remember that referees only ever get 50% of the decision right for any one team, we need to accept this and get on with the game not keep harping on about something that happened ten minutes ago. It only affects the player performance not the way the referee performs.  Remember this, if nothing else, the referee has the cards he can dish them out, as management and players you can't. (Rant over).

Next up the small matter of a local derby on  Monday against Seaham Red Star.