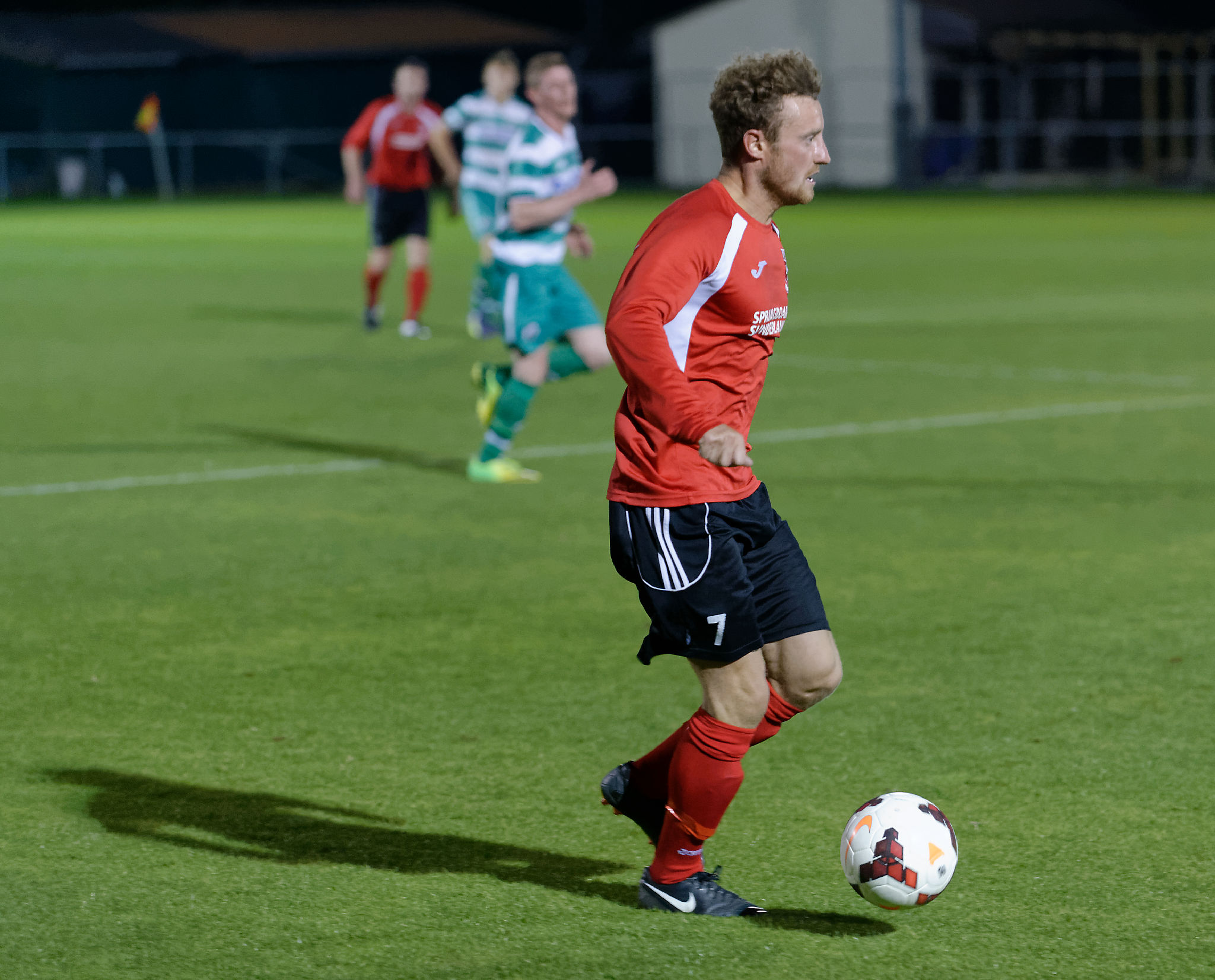 The management team made wholesale changes to the starting eleven for the visit to the Blue Flames Stadium.

It didn’t take long for RCA to get into their stride and for Davis to show what we have been missing in recent games. Made captain for the night, his first touch of the ball saw him drift past two defenders before passing inside to Callen whose low shot took a deflection and produced a terrific save from Wells at the expense of a corner.

RCA continued to outplay the home team and Davis was unlucky in the 5 minute when he picked up a pass from Proctor, drove into the box but sent his effort wide of the far post.

How RCA were not leading after 15 minutes is a mystery, they had 90% of the possession and had played in the opposition half for long periods, but the final finishing touches were just not happening.

Both Callen and Ryan Noble had good chances but pulled them wide.

A great move which saw Callen head on a pass from Reece Noble into the path of Armstrong who slipped the ball inside to Hope who in turn played the ball forward to Ryan Noble, he rounded the keeper but was adjudged to be offside.

This move seemed to galvanise the home team and within a minute they themselves had produced a stunning move. Wells sent the ball forward to Pearson who controlled the ball well, squared to McRoberts who clipped the ball inside to Keenan who sent a through ball into the path of Lee who thundered in a low drive which Morris saved with his legs. RCA cleared the corner, but it fell to Keenan who sent in a tantalising cross which was met at the far post by Patrick but he sent his header wide of the upright.

The defensive frailties which have plagued RCA’s defence this season reared their ugly head again in the 18 minute when a weak back pass saw Morris scramble to get to the ball and his clearance rebounded off Pearson and luckily flew over the bar.

Having weathered the storm the visitors looked to get back into a pattern of passing football but all too often an over-hit or misplaced pass heralded the end of a good passing move.

West Allotment took the lead in the 23rd minute when RCA lost possession on the edge of the opposition’s penalty area and a long ball forward missed out both midfield and defence and fell Pearson who calmly slotted the ball past the advancing Morris.

As the game degenerated into a scrappy affair, neither team seemed able to string any sort of passing moves together however it was the home team who looked the more dangerous and it could so easily have been 3-0 if Morris had not pulled of two sublime saves from Keenan and Pearson.

Everything turned on its head again in the 40th minute when RCA were awarded a freekick deep in their own half and Morris the saviour became Morris the provider as he sent a terrific 60 yard pass into the path of Davis and he lobbed the keeper from the edge of the area to level the game.

The second half started in truly spectacular style from the kick off the ball was switched to the left by Reece Noble, Armstrong picked up the pass and moved it forward to Callen who slipped it to Davis who jinxed his way past three defenders before blasting the ball past Wells.

West Allotment took the kick off and went straight up the other end and equalised, a long ball from Dobson was headed forward by Lee to Pearson who fired the ball into the net without an RCA player touching the ball.

A minute later and it was 3 – 2 to RCA, a forward ball from Brown was controlled by Callen on the left, he crossed into the box where Ryan Noble, unselfishly, laid the ball into the path of Hope and he shot home past a bewildered Wells.

What an amazing 5 minutes and it didn’t stop there, RCA pushing forward in the 52nd minute saw Callen once again outpace the West Allotment defence and cross into the box, the ball fell to Ryan Noble who volleyed the ball just wide of the post.

West Allotment came storming back and equalised in the 55th minute when a speculative long ball from Dunn was allowed to bounce between the last defender and the keeper and Lee pounced to fire home from close range.

As with the first half, the pace of the game died a little and chances were limited to long range effort mainly off target.

After a spate of substitutions RCA started to build up the pressure on the home team’s defence but the final ball was always just lacking and in the 75th we were almost caught out again when we lost possession and Elliott sent a long ball forward to McRoberts who turned and fired in a shot which Morris could only parry out to the unmarked Keenan who fired over the bar from 10 yards out.

The home team were now looking to pump long balls forward at every opportunity as this seemed to be their best way of getting anything out of the game but the RCA defence held out.

In the 82nd minute, in a change of fortune West Allotment were guilty of giving the ball away in their own half and Hope seized the chance to play the ball out to Callen who cut inside his marker before crossing to Davis who blasted the ball home for his hat-trick to give RCA a 4-3 lead.

West Allotment’s players seemed to physically wilt after this set-back and RCA pushed on, Hughes had a chance to put the game to bed but fired high and wide.

However RCA had saved the best till last, in the 89th minute a long ball forward from Proctor was chested down by Callen who completely wrong footed the whole of the West Allotment defence with a little dummy and had time and space to control the ball before slipping it past Wells. (Really, you had to be there).

The game ended 5 -3 to RCA and our first win of the campaign. If the season continues like this we might become the first team to score over a 100 goals in the same season as conceding 100 goals. While it is entertaining for the neutral spectator it does little to keep the blood pressure down.

This game probably posed more Questions than Answers for the management team or maybe not, only they will know!

The Shildon and Seaham Red Star games will be completely different affairs; we will be punished for any defensive mistakes by the strikers of these two teams.

Next up Shildon on Saturday.

Remember kick off on Bank Holiday Monday is 12.00 noon. We look forward to seeing you all there.