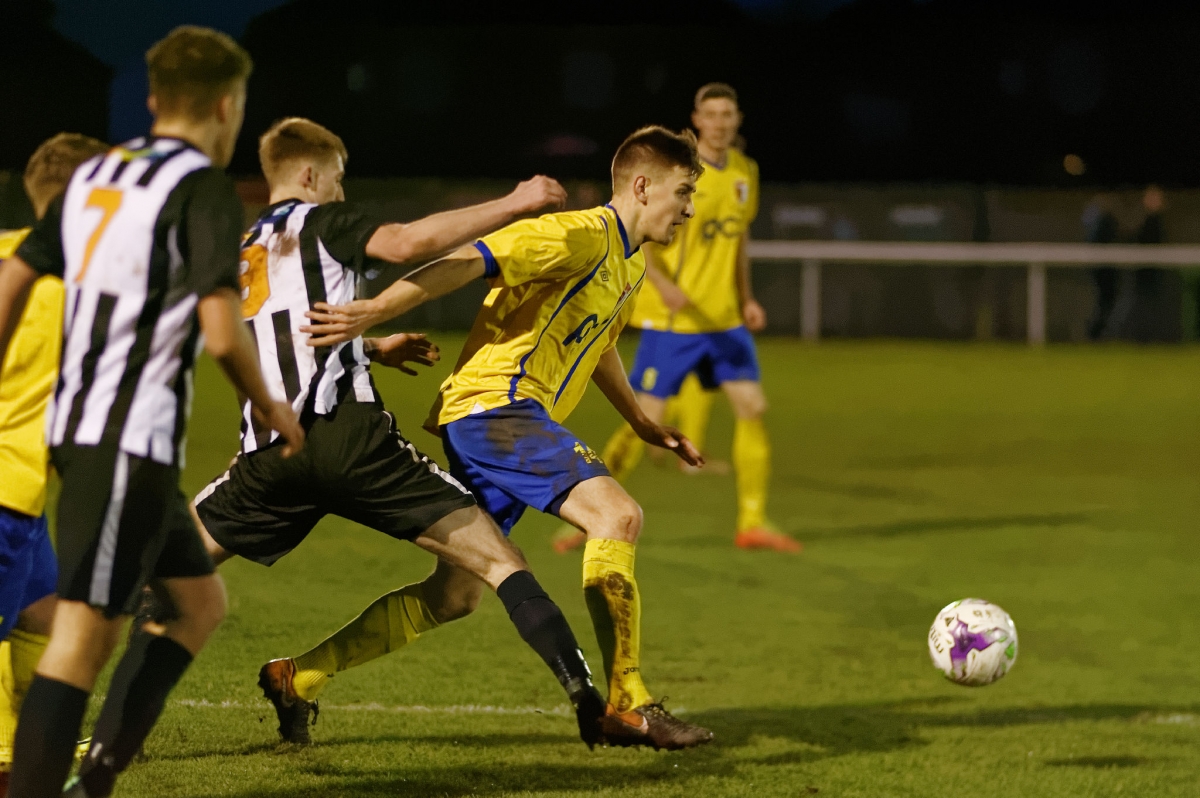 Craig Hodgson breaks up an Ashington attack during the second half of the match.

Sunderland RCA made the trip to Woodhorn Lane to play an Ashington AFC team whose luck in recent months seems to have deserted them.

It was nice to meet up with Ex RCA player Wayne Buchanan who was returning after suffering a broken leg on the first day of the season.

Injuries continue to restrict the Management team with key players sidelined and so it was that they made two changes to the team that started on Wednesday in the Durham Challenge Cup with Lilley replacing Hodgson and Moan coming in for Page.

Both sides seemed up for this game from the off and in the opening two minutes a quick throw in by Jury was picked up by Charlton his cross was met by Davis whose powerful header was brilliantly tipped onto the post by Colliers captain Conor Grant.

The home team responded with a terrific shot from Butler but he was denied by the post.

The game got bogged down for a spell with neither team creating anything in the way of goalmouth action. In the 23rd minute a slip by Jury, who under hit his back pass and allowed Atkinson a run at goal, he drifted past Pocklington but sent his shot across the face of goal and wide of the far post.

It was Ashington who created the next goal opportunity when they were awarded a free-kick 25 yards out after Jury had fouled the dangerous Butler. The free kick was whipped into the box and fell to Cunningham who blazed over the bar from 12 yards out.

In the 35th minute Larkin and Davis, combined for the first time in the game and it needed a fantastic save from Grant to deny Davis and RCA the opening goal.

A minute later and Ashington broke down the right with Cunningham who forces a corner, the corner was floated to the far post and headed back across goal and it takes a dramatic goal line clearance from McNab to keep the score level.

In the 42nd minute RCA almost broke the deadlock when a Pocklington freekick was headed on by Swansbury into the path of Larkin whose shot, which was heading for the bottom corner, hit an Ashington defender and looped into the waiting arms of a relieved Grant.

Deep into injury time in the first half Butler produced a defence splitting pass to release the overlapping McAndrew on the right and his inch-perfect cross found the unmarked Butler, eight yards out, and he heads past Pocklington.

RCA started the second half on the front foot, in the first minute of the second half McAloon crosses the ball to the far post where Moan is unlucky to head wide from 6 yards out.

Two minutes later and Grant produces another superb save, Davis takes a return pass from Charlton before firing in a shot from six yards out that Grant managed to palm away and Hutchinson cleared the danger.

As in the first half the game became a little scrappy with both teams introducing substitutes to try and liven it up.

In the 72nd minute RCA had a golden opportunity to equalise. McNab picked up the ball on the left and sent in a curling cross to the far post where Swansbury looked certain to score, but his first time effort smashes the outside of the post before going behind for a goal kick.

Butler was causing all sorts of problems for the RCA defence and if he could have kept his composure in the 76th minute Ashington would have doubled their lead, unfortunately, having broken clear of two defenders and with only the keeper to beat he fired wide of the target.

RCA continued to battle in search of the equaliser and in the 85th minute an intricate one two between Davis and Charlton wet the ball up for Moan but his shot went wide of the post.

Ashington’s reply to this near miss was emphatic, a beautifully weighted ball from Edwards once again split the RCA defence and left Atkinson one on one with the keeper, The “Collies” striker kept his head and rounded Pocklington before sliding the ball into an empty net.

Should RCA have gotten something out of this game? Possibly a draw with the amount of possession in the second half however they found Grant in outstanding form today and him along with Butler were the main reason we came away from Woodhorn Lane with nothing.