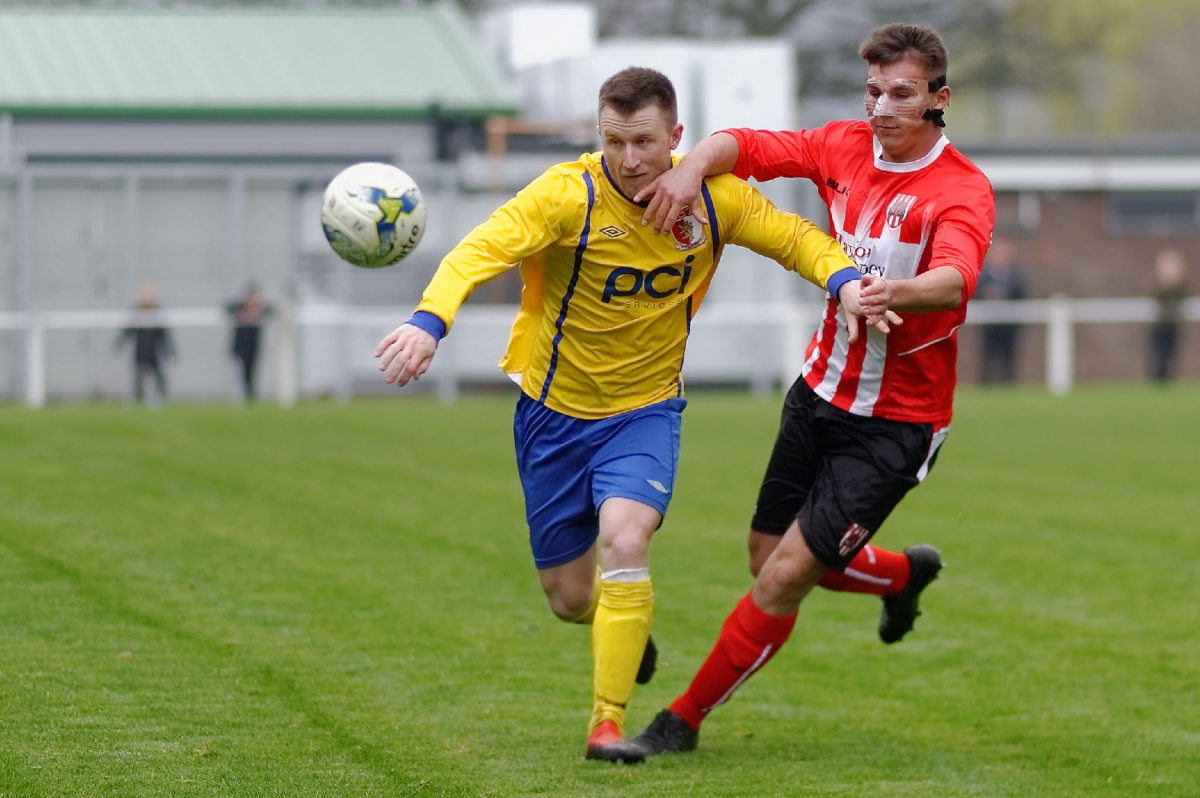 Kyle Davis on the attack for RCA during the second half of the match.

The RCA management team made 2 changes to the side that drew against North Shields eleven days ago, Dylan Elliott returning to the side following an ankle injury replacing Michael Charlton and Jordan Lavery replacing Sam Lilley at left back.

RCA were quickly into their passing game and started to cause problems down both flanks early in the game.

In the 5th minute a diagonal ball from Elliott picked out Larkin on the left wing, he cut inside his marker before crossing to the far post where O’Neill rose well to power a header goalward but a magnificent fingertip save by J Nixon in the Guisborough Town goal prevented RCA taking the lead.

The Priormen’s first real chance came in the 10th minute when McNeill crossed the ball from the left, it was flicked on by Hume into the path of L Nixon but his header was well saved by Patterson.

The visitors started to exert more pressure on the Priorymen’s defence and from a Davis freekick Preston got in a header which was deflected up in the air to O’Neill who managed to get above L Nixon to head toward goal but the ball was scrambled clear with RCA’s appeals for a penalty waved away.

RCA’s next chance came from a cross into the box by Howard, Davison headed it on to O’Neill but his shot went wide.

Minutes later and Larkin had a good chance but his effort was blocked by Bythway and cleared by Marron.

On the half hour mark Guisborough turned the tide slightly as they saw more of the ball, a darting run by L Nixon ended with a cross which was met on the volley by Young but it went inches over the bar.

This should have served as a warning to RCA that the home team were dangerous on the counter attack and so it proved in the 38th minute when a long hopefull ball forward was collected by Robinson and Preston’s tackle was penalized by the referee and a Penalty awarded, Robinson stepped up and sent Patterson the wrong way to give Guisborough the lead.

It was the Priorymen, buoyed by the goal, who ended the half the better and only the timely intervention of Swansbury stopped them from extending their lead when he cut out a cross from the lively L Nixon with Hume and Robinson waiting to take advantage of any mistakes.

The second half started with RCA looking to get back on level terms but a number of early attacks ended with poor crosses into the box.

It was Guisborough who had a great chance to put the game to bed in the 50th minute when they broke away down the centre and Hume fired over the bar with only Patterson to beat.

With an hour gone RCA were awarded a corner which was taken by Lavery, he cleverly picked out Elliott, 30 yards from goal and he struck a peach of a shot which was equaled by another magnificent save by J Nixon tipping the shot over the bar.

RCA were building up the pressure, a cross field 60 yard pass by Lavery was picked up by Davis who pulled the ball back to Page but he fired over the bar from the edge of the box.

In an almost identical move Lavery again played a crossfield ball to Davis, this time the winger played the ball across the face of the goal where O’Neill, sliding in, could only manage to steer the ball agonisingly wide of the far post.

From the goalkick J Nixon sent the ball forward and it was flicked on into the path of Robinson who beat the offside trap and made no mistake blasting the ball past Patterson.

It could so easily have gotten a lot worse for RCA two minutes later when Robinson again broke free but this time Patterson stood strong and produced a wonderful save to deny robinson his hat trick.

In the 79th minute a through ball by Moan was picked up by Larkin who broke into the box before being fouled by Marron. Davison elected to take the kick but J Nixon guessed right and managed to pull off another great save to deny RCA.

The introduction of McAloon had an immediate effect when he slipped his marker to send in a low cross which was guided into the net by Davison to get RCA back into the match.

This set up the opportunity of a grandstand finish, however, for all their endeavour in the final 10 minutes of the game the RCA attack could not break down a very resilient home defence, ably led by their Captain and man of the match Jordan Nixon.