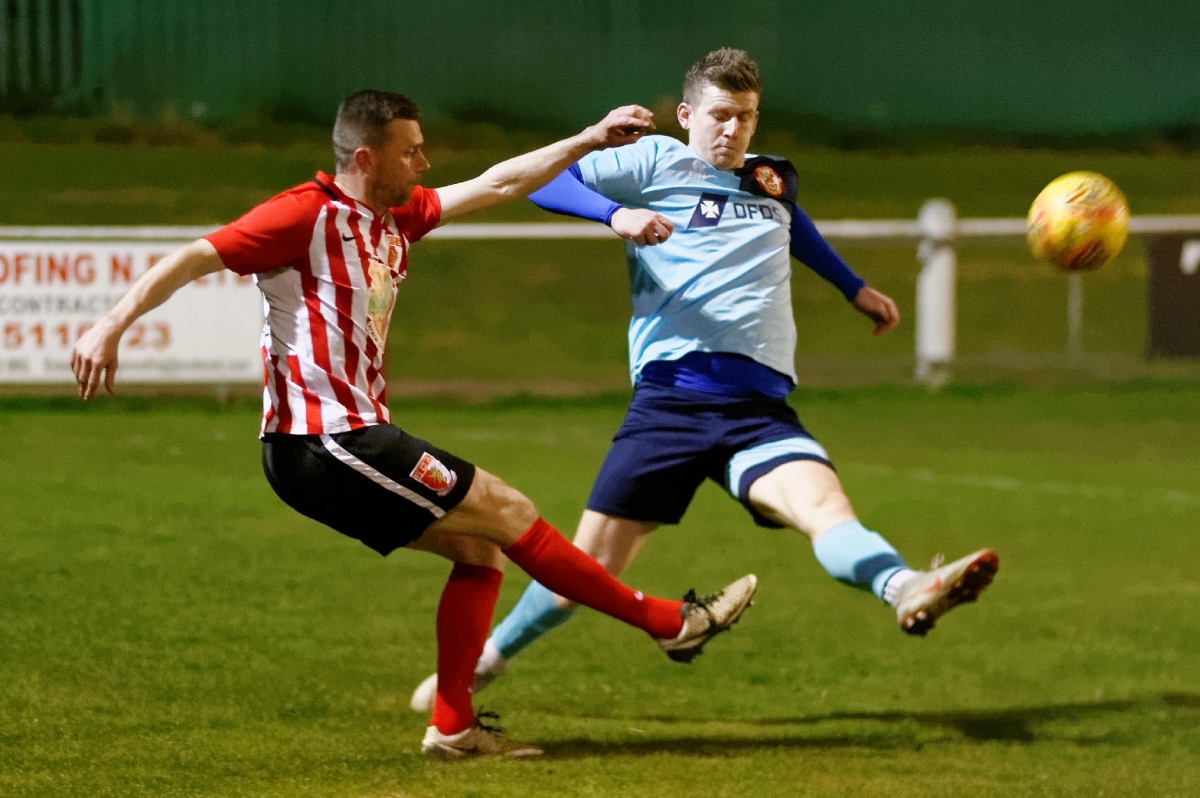 Colin Larkin delivers a cross during the first half of the match.

RCA management team made three changes to the side that won against Newton Aycliffe at the weekend, Preston replaced the injured Hodgson, Lilley came in for the injured Lavery and Larkin returned in place of Moan.

Stephen Callen returned to occupy a place on the bench after his hernia operation.

Unlike RCA’s last few matches this game started with a flurry of activity, North Shields elected to kick down the slope in the first half and were quickly on the attack, Ormston’s through ball looked to be easily dealt with by Patterson but his hasty clearance fell to McRoberts whose first time shot went wide of the target.

A minute later at the other end Page sent the ball forward for Larkin who tried an aerobatic overhead kick which went over the bar of a relieved Purvis in the visitors goal.

In the 5th minute Swansbury intercepted a pass inside the centre circle and spotting the Shield’s keeper off his line tried an audacious looping shot which had Purvis scrambling to get a hand on the ball to make the save.

The game was end to end and very entertaining stuff, when P Robinson was brought down 25 yards out McRoberts took the freekick and sent in a dipping shot which Patterson did well to turn away for a corner.

Three minutes later and Charlton was set free on the right, cutting inside he clipped a cross to the far post where Larkin volleyed a shot over the bar.

Larkin was unlucky not to open the scoring in the 17th minute when a Howard freekick was played to the near post where Larkin only needed to get a touch on the ball for a certain goal but he was unable to get the required touch and the ball went harmlessly through to Purvis.

North Shields took the lead in the 24th minute when a corner was played to P Robinson on the edge of the box, he fired in a low drive towards the near post and it took a wicked bounce just in front of Patterson who managed to get a hand to it but was unable to stop the ball from entering the net.

RCA tried to respond but their strategy of sending high balls into the box was met by some solid defending and they were reduced to one real effort when, after a number of blocked shots Page got the final shot away but it went wide.

The visitors had a chance to double their lead on the half hour when P Robinson ran at the heart of the RCA defence before playing in McRoberts who thundered in a terrific shot which Patterson somehow managed to claw out of the top corner and palm away for a corner.

Two minutes later at the other end and an RCA counter attack saw K Davis cut the ball back for Larkin who glanced a header toward the far corner of the goal but McDonald was on hand to clear off the line, heading over the bar.

McRoberts was in the thick of the action a few minutes later when he forced another good save from Patterson and his resulting corner was met by Nearney who sent his header over the bar when in a good position.

The second half started with the hosts on the attack and looking for an early equaliser. Their first chance came in the 50th minute when Page broke from midfield to set up O’Neill, his rasping shot flew inches wide of the upright.

During the next 5 minutes RCA had shots from O’Neill, Page, K Davis and Charlton all going well wide of the target and not troubling Purvis in the Shields goal.

North Shields only response was a breakaway by P Robinson who again played the ball to McRoberts, his cross fell to Day but his first time effort was blocked by Preston and cleared by Patterson.

RCA equalized in the 75th minute when K Davis took a freekick wide on the right, his whipped cross was met by O’Neill and blocked by Nearney as the ball bobbled about inside the six yard area Preston took charge and blasted the ball home.

It was all one way traffic now as RCA went in search of the winner, in the 79th minute another freekick taken this time by Howard was squared to O’Neill who sent in a crisp low drive which skimmed the post with Purvis well beaten.

Minutes later and it was the turn of Davis to slice a shot wide of the target and then a great opportunity presented itself to O’Neill but he glanced his header from a Larkin cross just wide.

In the final minute of normal time RCA thought they had scored, a Page through ball saw Davison in on goal, his initial effort was saved by Purvis and rebounded to him, his second effort beat the keeper but was cleared off the line by Donnison. (No VAR here and it wasn’t clear that the ball had fully crossed the line.).

Into injury time and RCA still had chances to win the match. A cross into the box by Larkin was met by Davison but his header was palmed away by Purvis, hit O’Neill and flew inches wide of the post.

A minute later and a cross into the box by Page saw both Davison and O'Neill inches away from getting their head to the ball and any touch would have been rewarded with a goal.

Just before the referee blew for full time Larkin had one final surge into the box but his curling effort went high and wide.

In reality North Shields probably had the better of the first half but RCA were well on top in the second and some would say that a draw was a fair result. However on chances created RCA must feel a little unlucky not to come away with the three points.

For those going to the Checkatrade Cup Final at Wembley enjoy the day out and let’s see Sunderland AFC come home with the trophy.