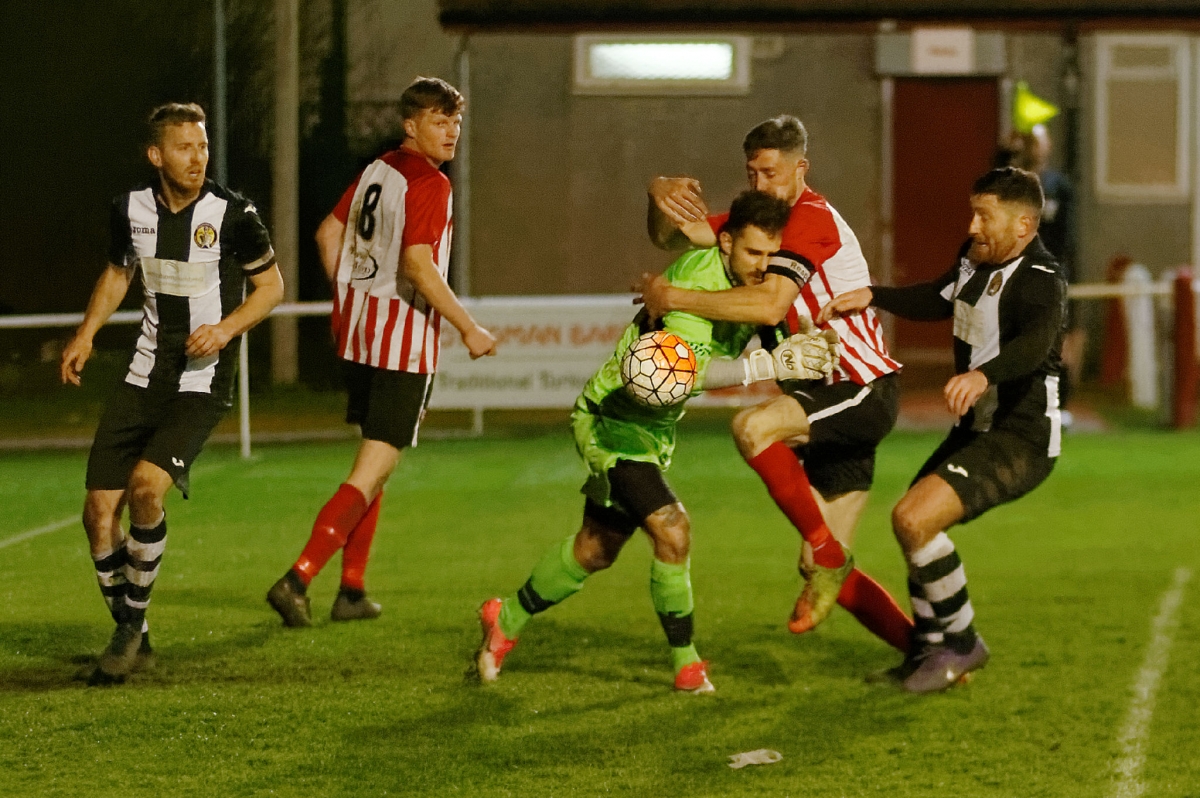 Sunderland RCA welcomed Whickham to Meadow Park for this Ebac Northern League encounter, the first between the two teams at Meadow Park since September 2009 when RCA ran out 3 – 0 winners.

RCA were forced to make changes due to an injury to Dylan Elliott during training on Saturday. His place was taken by Mark Davison and the reshuffle of the team saw O’Neill drop into midfield with Moan and Davison up front.

Whickham took advantage of the slope in the first half and were soon putting RCA under pressure Burrell and Pattison combining well on the right before Swansbury intercepted a cross intended for Bulford.

The home team were finding it difficult to get the ball out of their own half as the visitors played a pressing game which stifled RCA’s attacking options.

In the 12th minute Whickham almost took the lead, a good ball from Grieve was picked up by Pattison whose cross into the box was met on the volley by Bulford and only a superb save from Pattison prevented the ball from entering the net, the rebound fell to Burrell who smashed the ball off the bar before Patterson produces another tremendous save to turn the ball away for a corner.

Within a minute the visitors were back on the attack this time Burrell dispossessed McAloon on the halfway line before testing RCA’s young keeper with a 35 yard dipping shot which Patterson did well to tip over the bar.

The game seemed to settle as RCA got to grips with the Whickham attack and the game became a bit scrappy with neither team able to find a final pass which would open up the opposition's defence.

A bizarre incident when the referee blew for a freekick inside Whickham's penalty area for a back pass, after heated arguments from the Whickham players and upon consulting his assistant the referee agreed that he was mistaken and that the ball had indeed been played back to the keeper with the knee of the defender.

With half an our gone RCA finally mustered some attacking efforts, Lavery and Larkin played a neat one two on the left before Larkin crossed into the box for Davison but his shot was blocked by Grieve.

Five minutes later a long clearance from Patterson was headed away by Martindale but only went as far as Moan on the edge of the box he controlled the ball before hitting a great shot past Tsapalos but it struck the inside of the post and rebounded into the arms of the Whickham keeper.

In the 40th minute RCA had a two appeals for a penalty turned down, firstly, O’Neill was fed the ball by Lavery and as he turned he appeared to be tripped by Burrell who cleared the ball forward, it was picked up by Hodgson who sent the ball forward into the oppositions box where Moan out jumped Tsapalos to head the ball forward but the Whickham keeper crashed into Moan denying him any chance of getting to the ball. On both occasions the referee waved play on.

The half ended with Whickham pushing forward again through Pattison but his run was stopped by a terrific tackle by Swanbury.

Whickham made a change at half time with Stevens replacing the injured Bulford.

The visitors mounted the first attack of the second half with Pattison again the architect, his run on the right was spotted by Scroggins who played a delightful ball into his path, he skipped past Lavery before crossing into the box but Stephens was beaten to the ball by Hodgson who cleared.

RCA picked up the pace and started to put pressure on the visitors defence.

In the 48th minute RCA where awarded a freekick which was taken by Lavery, his shot was tipped over the bar by Tsapalos for a corner, the resulting corner was headed clear by Grieve.

The home team was beginning to get a stranglehold on the game and it was only some great defending by Kay which prevented McAloon from getting into the box to set up Davison.

Another freekick on the right was again taken by Lavery, this time he drove a cross into the box where Davison managed to get a head to the ball but his effort went wide.

The pressure on the Whickham defence was mounting and when Swansbury found Larkin on the left with a super pass it looked odds on that he would open the scoring but his curling shot went inches over the bar.

Whickham, like RCA in the first half, were finding it difficult to get out of their own half and when they did Swansbury and Hodgson were on hand to clear the ball away.

K Davis replaced McAloon in the 68th minute and was immediately in the action, Howard played the ball forward on the right and K Davis crossed into the box where O’Neill headed over the bar.

RCA pushed O’Neill forward in what looked like a 4-2-4 formation in an effort to get the opening goal and it almost worked immediately when Lavery passed to Larkin on the left, his cross was met by O’Neill but again he headed over the bar.

Into the last 10 minutes of the game and RCA brought on Croft for Moan and Swansbury went up front with Davison.

In the 81st minute a freekick taken by Patterson was flicked on by Davison into the path of O’Neill who shot wide of the upright.

A minute later and Page dribbled his way into the box before squaring the ball to O’Neill who could only scoop the ball over the bar.

The pressure on Whickham was relentless but they were defending magnificently, when Davis played the ball into the box for Page, he rounded the keeper cut inside but was met with a wall of Black and White shirts and the ball was eventually cleared by Martindale.

In the final minutes another freekick by Patterson was controlled by O’Neill who moved forward into the box before firing in a low shot which Tsapalos saved.

Into injury time and an injury to Burrell delayed the inevitable full time whistle. With The visitors down to ten men RCA mounted a final assault, Hodgson played the ball wide to Larkin who drove on to the by line before crossing into the box, Davison picked up the ball and fired a shot across the six yard area and although the ball was partially cleared it fell to RCA’s captain Swansbury and he smashed the ball into the net from ten yards out.

RCA moved up to fourth with this win while Whickham can count themselves very unlucky not to come away with something from this game after such a sterling second half defensive display.