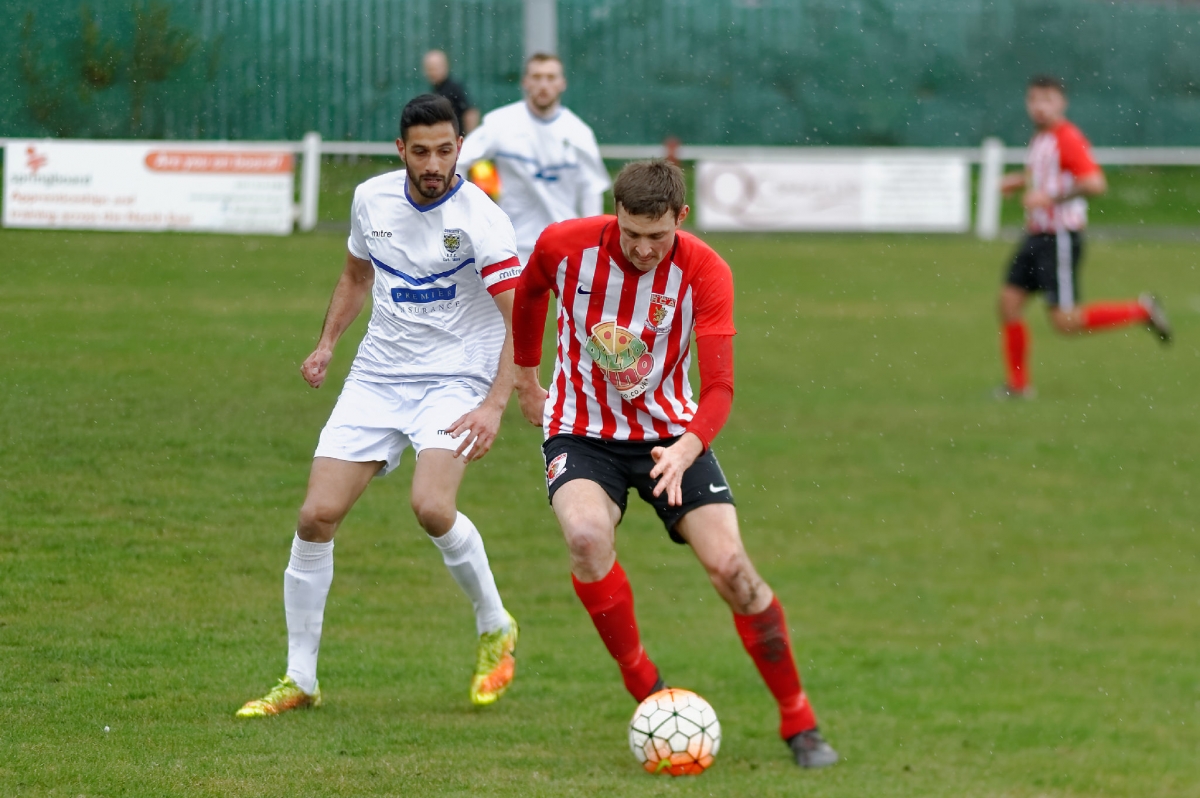 Goal scorer Nathan O'Neill in action during the first half of the match.

Sunderland RCA welcomed second placed Consett to Meadow Park for this Northern League encounter. RCA were looking to bounce back after last week’s defeat at Hebburn. The management team made four changes bringing in Anthony Patterson (on work experience from SAFC) for his debut in goal, there were also starts for Elliott, McAloon and Moan who replaced Pocklington, Preston (injured), Davison (injured) and Charlton.

Consett took advantage of the slope and the strong wind in the first half, but it was RCA who produced the first chance of the game when Larkin played the ball to Lavery on the left, he swung in a great cross which was met by O’Neill, but he could only direct his header straight at Hayes.

The visitors’ response was to attack down their left with Slocombe sliding a pass out to Juul, he whipped in a wicked cross which Hodgson headed away for a corner under pressure from Sweet.

In the ninth minute RCA were back on the attack. A cross into the box by Lavery was met with a glancing header by Moan, the ball struck Swansbury on the chest and went wide of the upright.

The home team were applying a lot of pressure to the Consett defence and in the 12th minute the persistence of Moan saw him dispossess Hawkins and play the ball to McAloon who dribbled past three defenders before shooting from an acute angle. Hayes managed to clear off the line and Consett eventually cleared the danger.

RCA took the lead their play deserved, in the 14th minute when Elliott picked up the ball in midfield and played it forward to McAloon who in turn slipped the ball into the path of Larkin who cut inside and fired a low shot past Hayes.

A minute after taking the lead RCA almost doubled it when Larkin again beat his marker on the left and whipped in a cross. Moan, with a diving header, sent the ball inches wide of the target.

The home team was seeing much more of the ball than their opponents and both Larkin and McAloon were causing problems cutting in from their respective wings.

McAloon created the next scoring opportunity when Howard played him in on the right. The RCA winger cut inside, evaded two tackles before stabbing the ball to Larkin but he shot just wide.

This seemed to lift Consett and deflated RCA for a time as the visitors, for the first time in the match, produced some good passing football.

On the half hour mark a wonderful passing move which involved almost all of the Consett players saw the ball eventually played forward by Slocombe to Lawrence who teed up the ball for the advancing Slocombe, but his shot was well saved by Patterson.

The next ten minutes were marred by a succession of niggly fouls by both sides which broke up play and there was little goalmouth action.

RCA retook the lead in the 42nd minute when Page battled through three tackles to win the ball and played it to Larkin on the left. His cross was met by O’Neill who had the time and the composure to chest the ball down before smashing it past Hayes.

The wind had died down for the start of the second half, but RCA started where they left off, attacking down both flanks to good effect, Larkin was the first to exploit the left wing beating his marker and crossing into the box where Hayes was first to the ball punching clear.

Then McAloon on the right cut inside his marker, played the ball to Elliott who scooped his shot wide.

In the 55th minute Larkin picked up a great forward ball from Lavery, burst into the penalty area but his shot was well saved by Hayes.

Consett had their first attack of the second half when Smith played the ball to Holden who was allowed to advance 20 yards before powering in a shot which Patterson parried away and Howard hooked to safety.

Two minutes later and Patterson was called upon again, this time making a tremendous save at the foot of the post off a thunderbolt of a shot from Cornish.

Back came RCA, Moan showed his persistence again winning the ball back on the right; his cross was headed away by Purewal, but fell to Elliott however, his snap shot flew over the bar.

RCA were rewarded for their attacking flair in the 65th minute when Page won the ball in midfield and sent a long ball forward, Larkin sprinted between two Consett defenders before cleverly chipping the ball over the keeper and into the empty net to make it 3 – 1.

There appeared to be no fight left in Consett as RCA poured forward looking for more goals and one duly came in 68th minute when Consett’s defence was caught in possession inside their own penalty area this time McAloon took full advantage curling the ball into the net from the angle of the penalty area.

Five minutes later and McAloon could have made it five when he intercepted a pass out of defence, cut inside but shot wide.

In a final flurry both Larkin and Moan had chances to increase RCA’s lead, but Hayes pulled off two good saves to deny the RCA duo.

A thoroughly deserved win for the lads, they dominated for long periods in the match and didn’t let Consett settle on the ball at all, from 1 – 16 absolutely terrific attitude and commitment.

After the match there was a presentation to Mark Davison for reaching the milestone of 100 goals in 149 appearances for SRCA a truly amazing record.